Charbhuja Garhbor, the temple of the Gurjars of Rajasthan

Charbhuja Garhbor is one of the four major Hindu shrines in the Mewar region of Rajasthan along with Shrinathji, Shri Eklingji and Kesariyaji. Located in the charming village of Garhbor about 30 kilometers from Kumbhalgarh Fort, this shrine, cared for by the Gurjar community, has a long history dating back to Vedic times over 5,000 years ago.

The origin of Charbhuja Garhbor

The history of the Charbhuja Garhbor temple is intimately connected with the Hindu god Krishna and the five Pandava brothers, the main characters of the Indian epic Mahabaratha: After a long life on earth (125 years), Lord Krishna decided to leave for Goloka, his final resting place. The Pandava brothers, for whom he had been a spiritual teacher, then asked him how they could live without him. Krishna therefore went to see Vishwakarma ji, the divine craftsman, to create a statue in his image. He then gave this idol to the Pandavas for their daily worship and went to his divine realm. 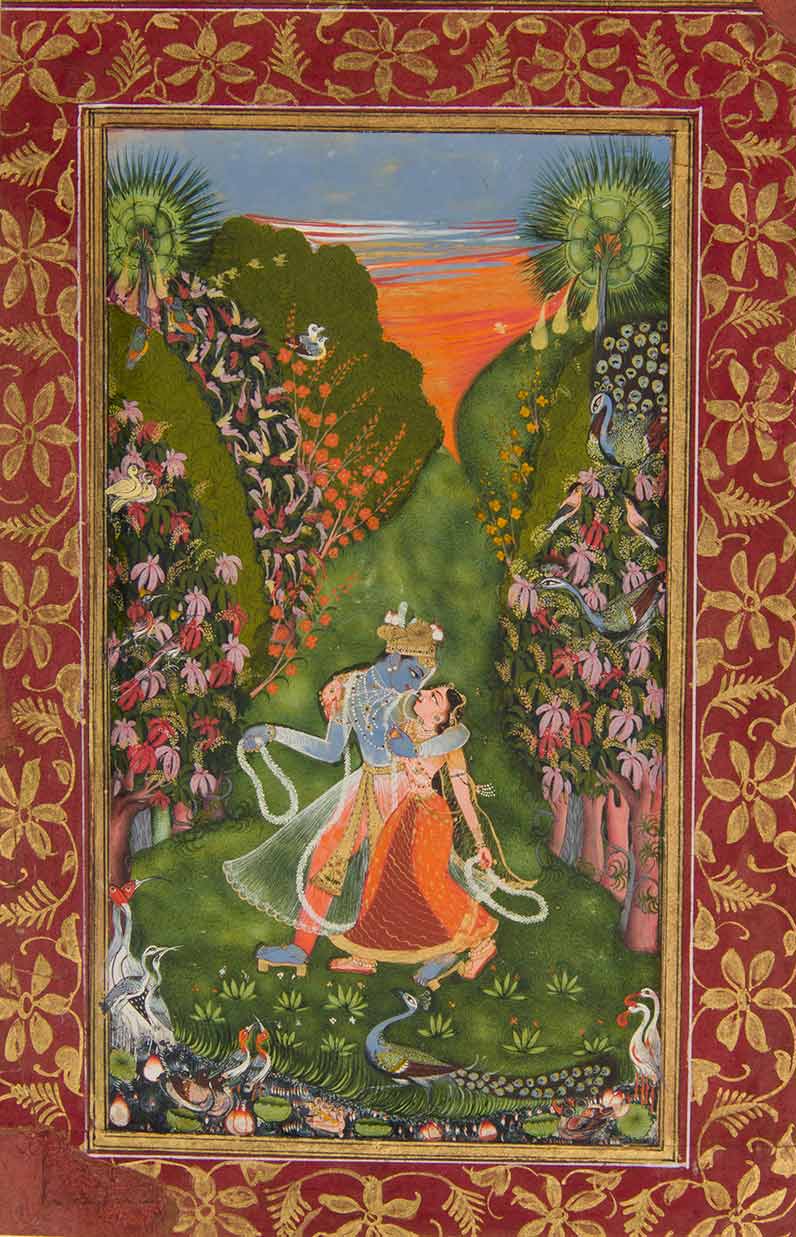 Goloka Vrindavan or Vaikunthdham is Krishna’s “heaven”. It is described in the Brahma-samhita texts as a “cintamani-dhama”, a place where all desires are fulfilled. The palaces are made of black jasper, dotted with “wish trees” that provide all kinds of food on demand and cows that give milk at will. It is symbolically the transcendental form of the god, the ultimate destination of life which, when reached, frees us from the material world. 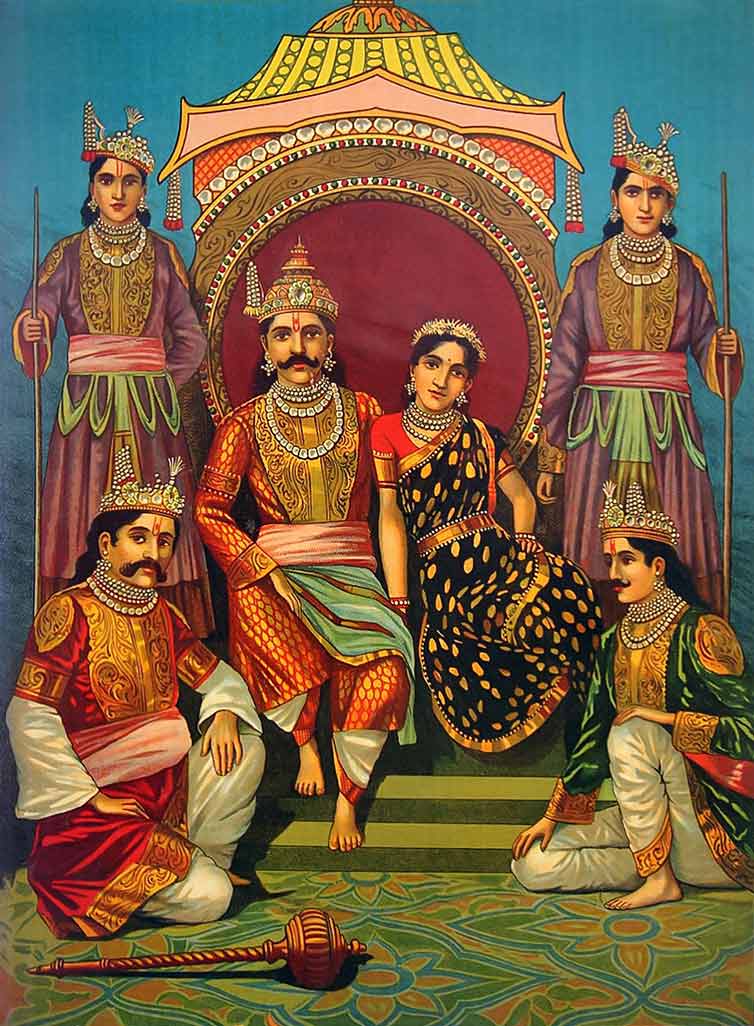 This statue continued to be venerated for centuries and centuries after the Pandavas until the Mughal invasions when the idol was immersed in a lake to escape looting. It remained there for many years until it was rediscovered by Sura Ji, a Gurjar cowherd. The story goes that Sura Gurjar had gone with his cow to distant pastures when he noticed that day after day the cow gave no more milk; someone, apparently, came to milk her discreetly during the night. One evening he lay awake and saw with amazement that the milk was coming out of his cow’s udder by itself. It was then that Lord Krishna appeared before him and asked him to take the idol out of the water and resume his worship. Since then, this statue is revered by the descendants of Sura Ji’s family and the entire Gurjar community. Nowadays, nearly 500 Gurjar families take turns in the temple for maintenance and rituals. 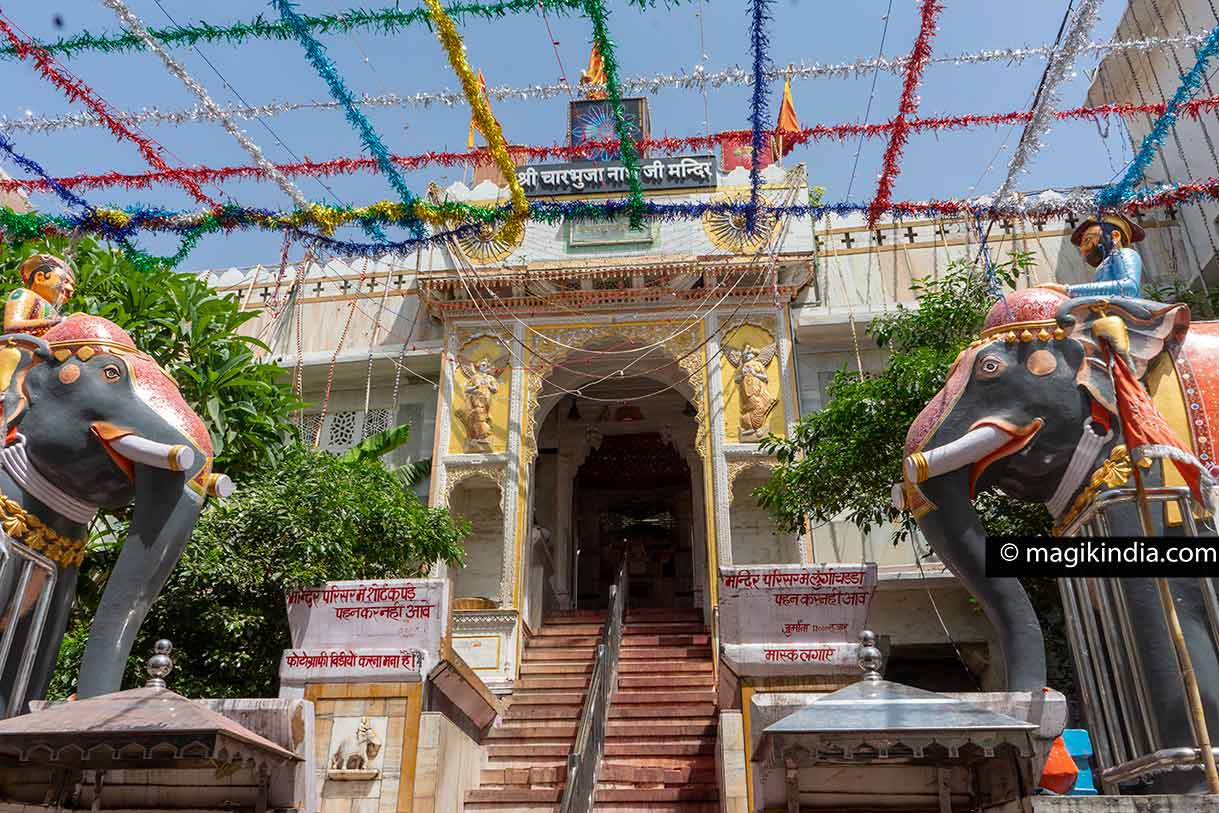 The entrance to the temple flanked by two massive elephants

The current temple is said to have been built in 1444 CE by Shri Gang Dev according to divine directives he received in a dream. The inscriptions inside the temple suggest that the village at that time was known as Badri, the temple was then called Badrinath. 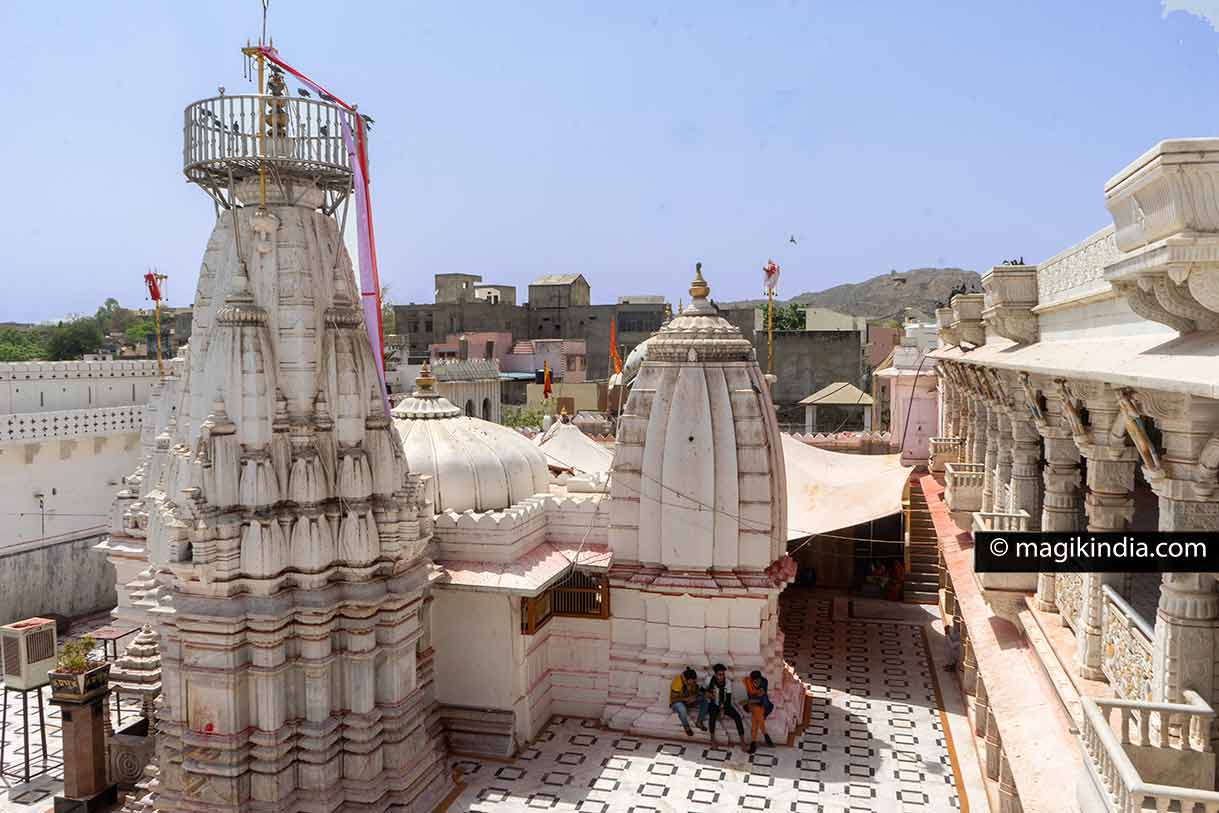 Charbhuja is of classic Nagara architecture (North India) flanked by two imposing elephants at the entrance and three sikharas. The highest of the three sikharas houses the sanctum sanctorum adorned with multicolored mirrors and ceramics. 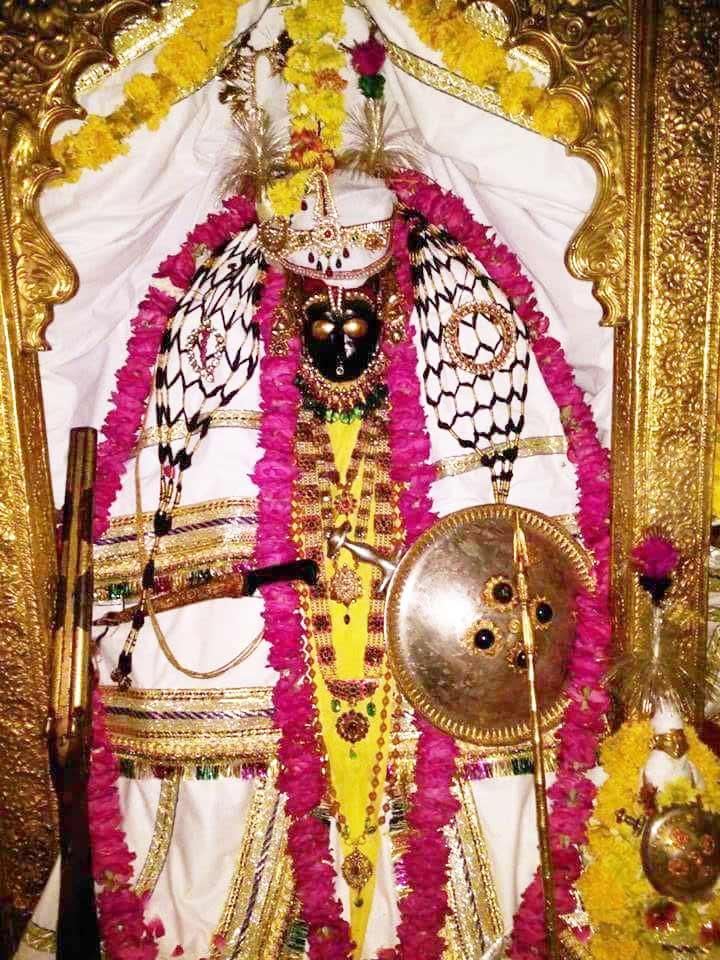 Charbhuja, the idol of the temple, representing Lord Vishnu

The black idol of Vishnu, 85 cm high, has “char bhuja”, that is to say “four arms”, hence the name of the temple. Each of his hands holds the usual attributes of Lord Vishnu: a conch, a club, a lotus and a disc (chakra), which is a metaphor for the wheel of time. As the temple has seen countless assaults, the statue is also armed with a sword and shield in memory of the battles that were fought to save it. 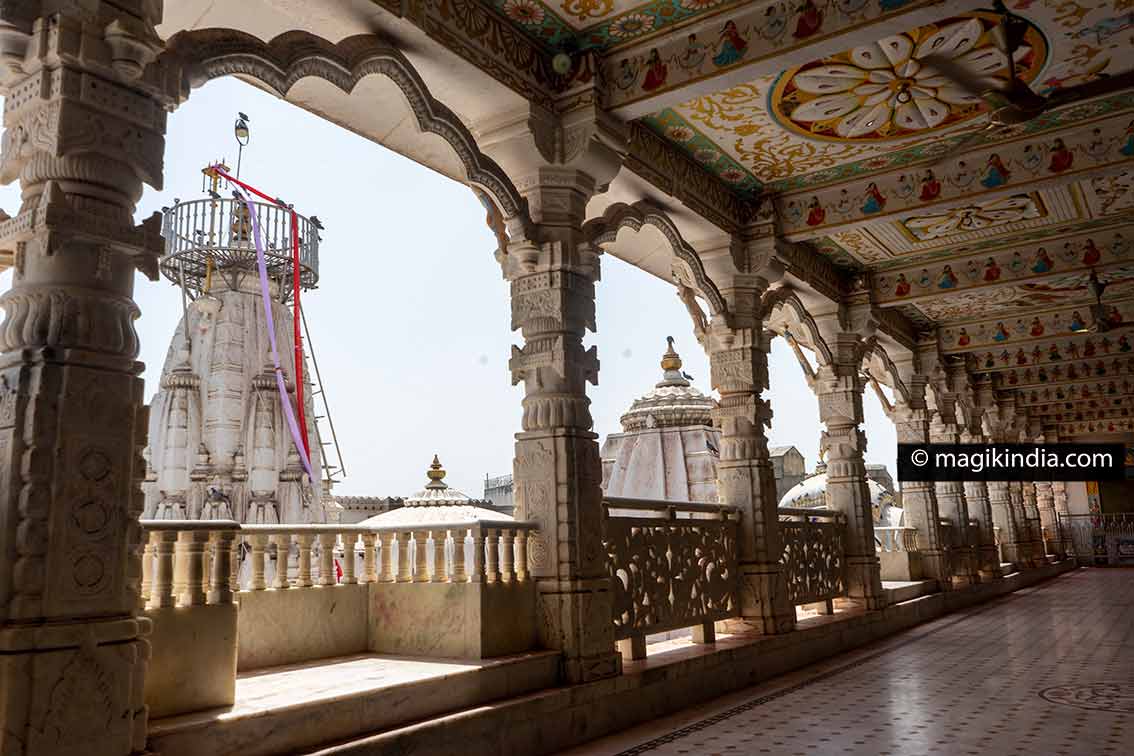 On the left side of the temple, a large, richly decorated gallery retraces several episodes in the life of Lord Krishna, the battle of Kurukshetra in particular. 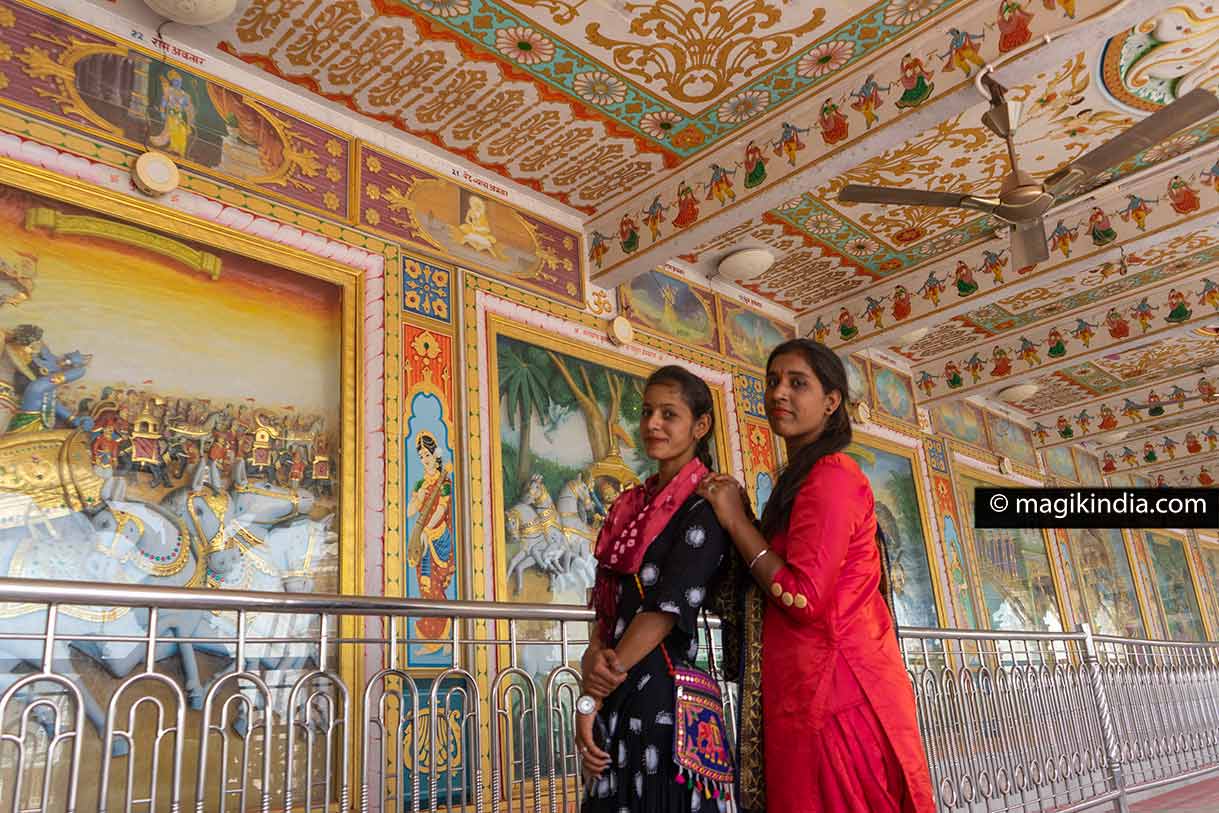 Leaving the temple, one cannot miss the Nakkar Khana, a large tower of Rajput architecture with its polylobed arches and its domed chhatri (umbrella) roof. It is used by musicians (percussion and shehnai) on festival days. 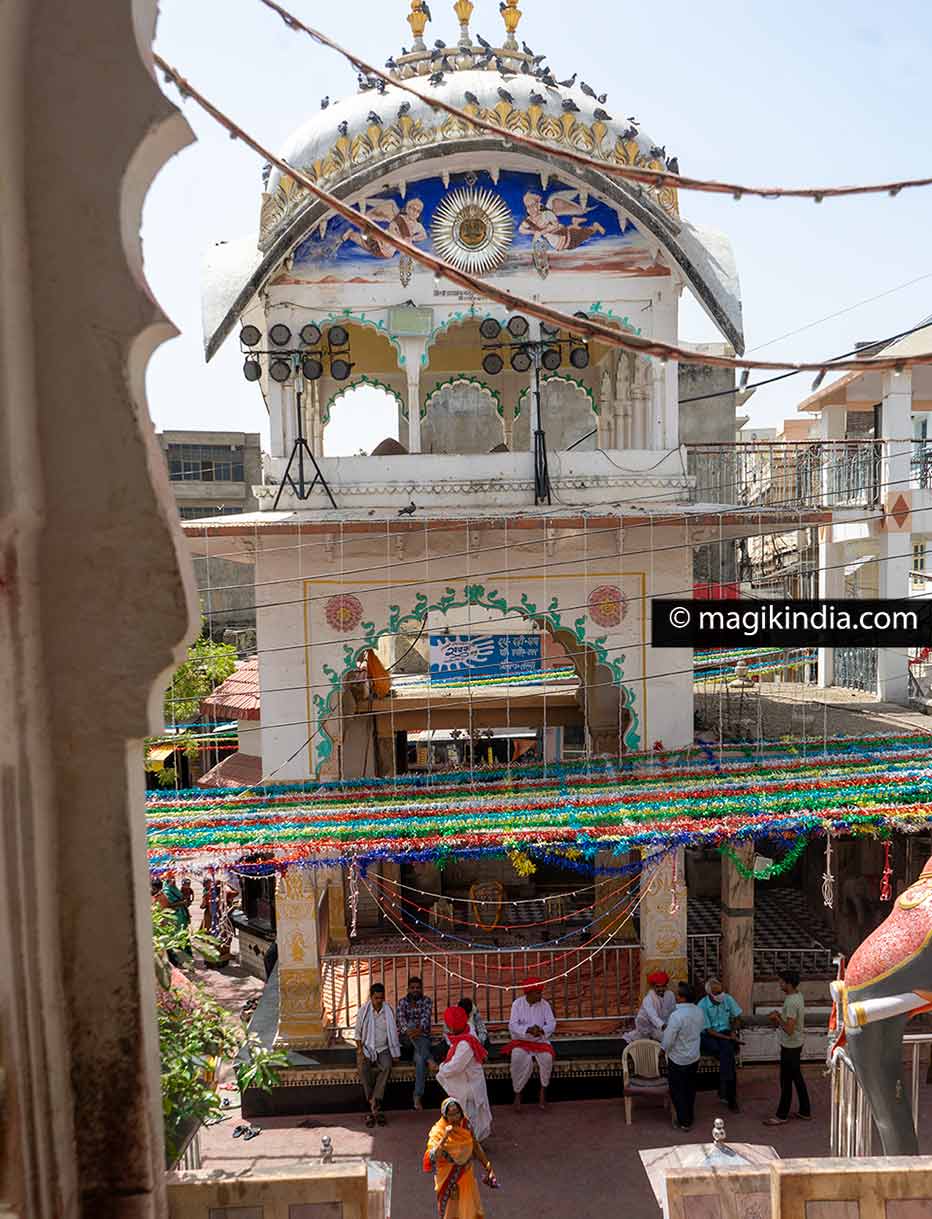 The Nakkar Khana, the tower where musicians play dholak and shehnai during festivals

The Gurjars, the guardians of the temple

The Gurjars or Gujjars are originally a pastoral community. It is a heterogeneous group that differentiates itself in terms of religion, profession and socio-economic status. 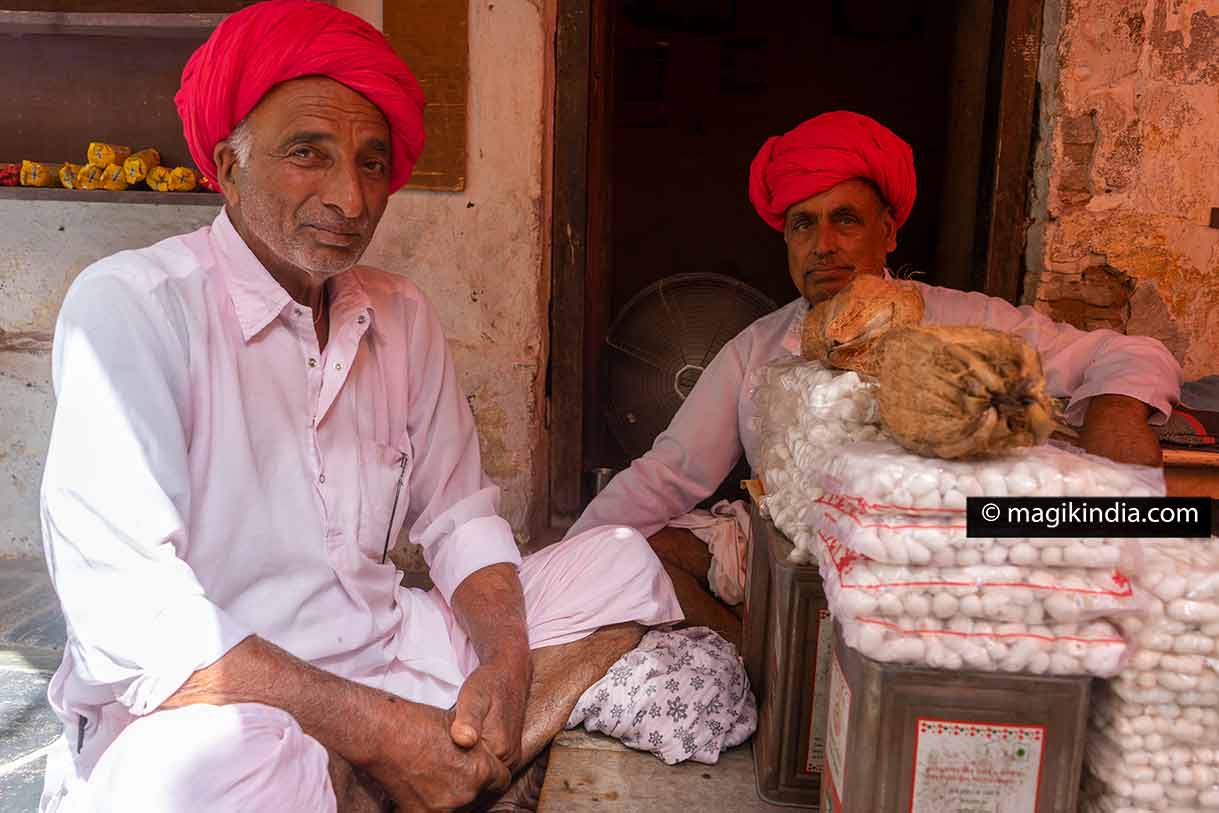 Gurjar men in their shop

Hindu Gurjars are mainly found in the Indian states of Rajasthan, Haryana, Madhya Pradesh and Maharashtra. Muslim Gujjars inhabit areas of Punjab, Indian Himalayan regions such as Jammu and Kashmir, Himachal Pradesh as well as Garhwal and Kumaon districts of Uttarakhand 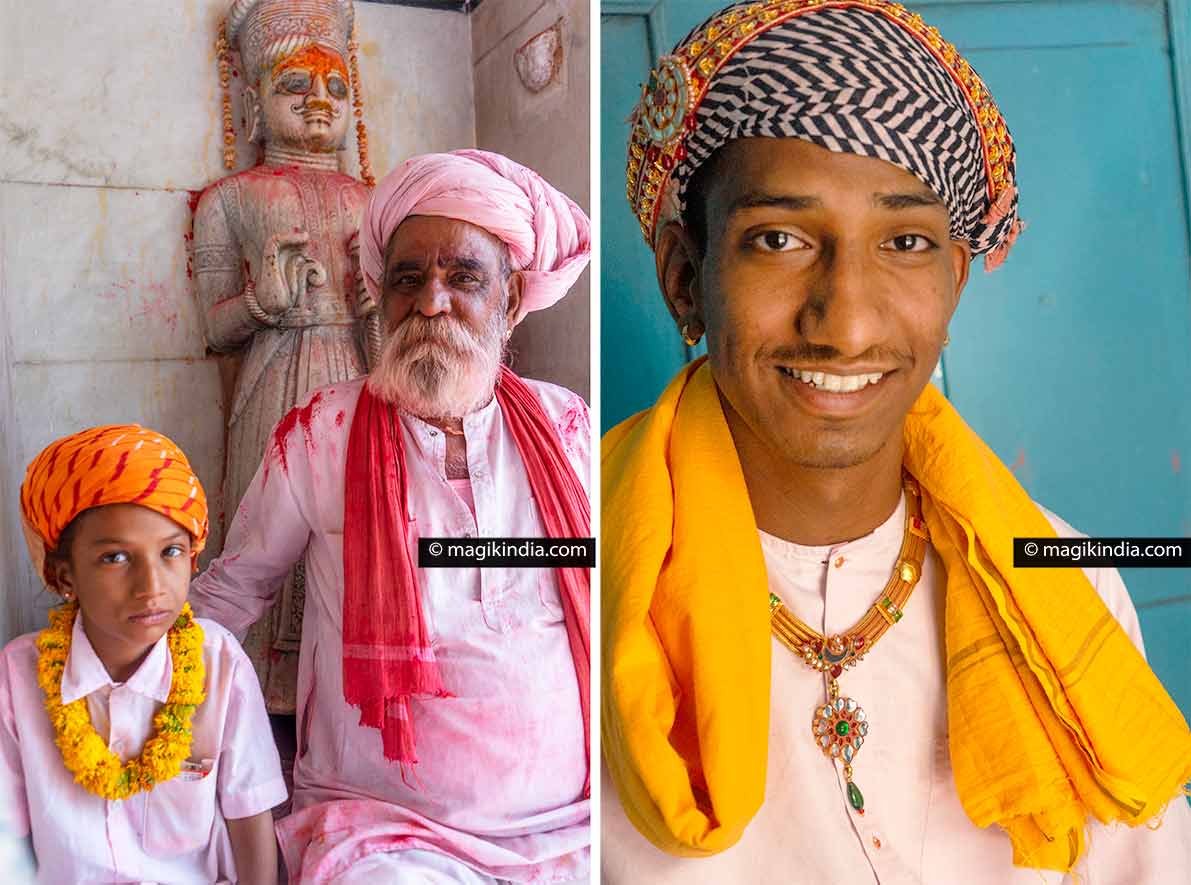 According to historians, there existed in the Middle Ages several Gurjar kingdoms which were called “Gurjara”, “Gurjaradesa” or “Gurjaratra” in present-day Rajasthan and Gujarat. Similarly, Saharanpur district in Uttar Pradesh was also known as “Gurjargadh”, due to the presence in the region of many Gurjar lords, wealthy farmers and landowners. Gurjaras fiefdoms began to disappear after the 10th century CE. At present, the older generation of Gurjars are still largely active in the field of agriculture. The younger generation, educated, perpetuates the traditions of the Gurjars during festivals. 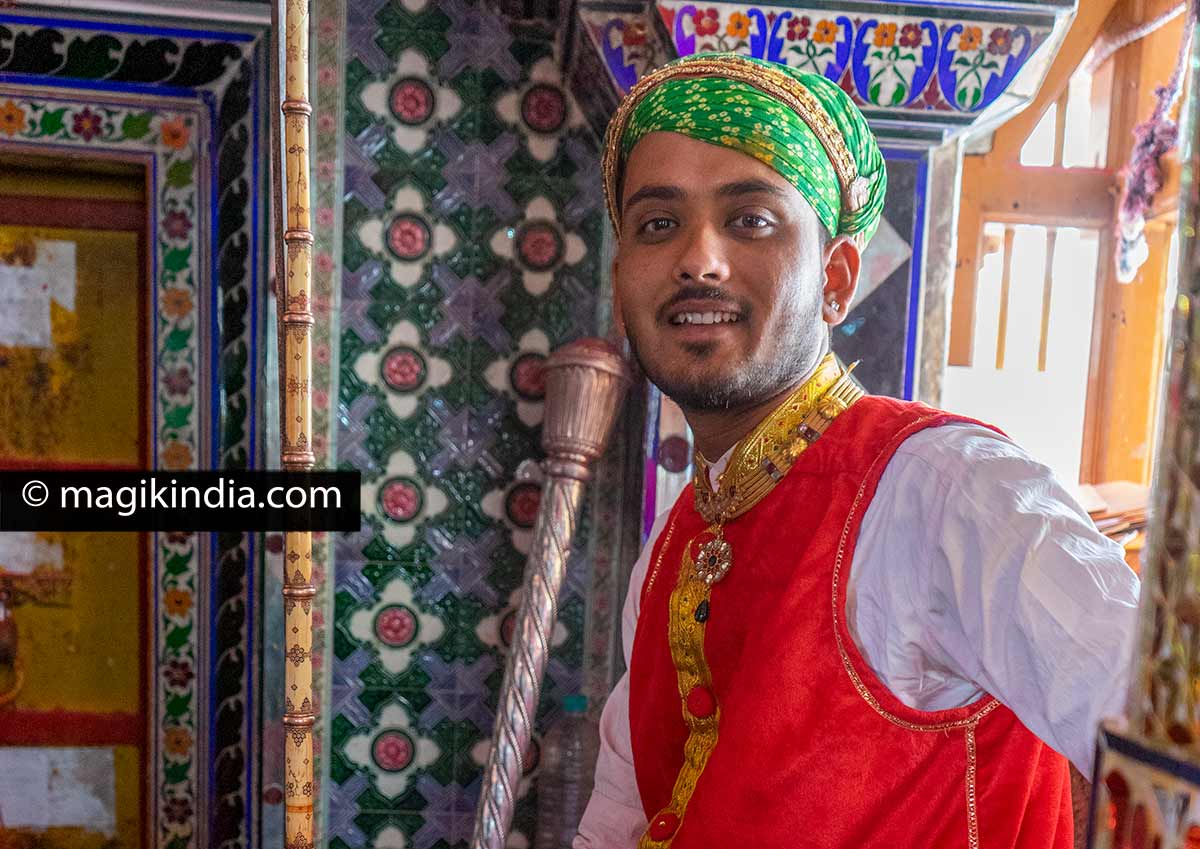 Vikas Gurjar in the shrine of the temple, getting ready for the festivities

The temple festivities follow those of the Hindu calendar, however, two festivals stand out, Holi and the Jhal Jhulni. 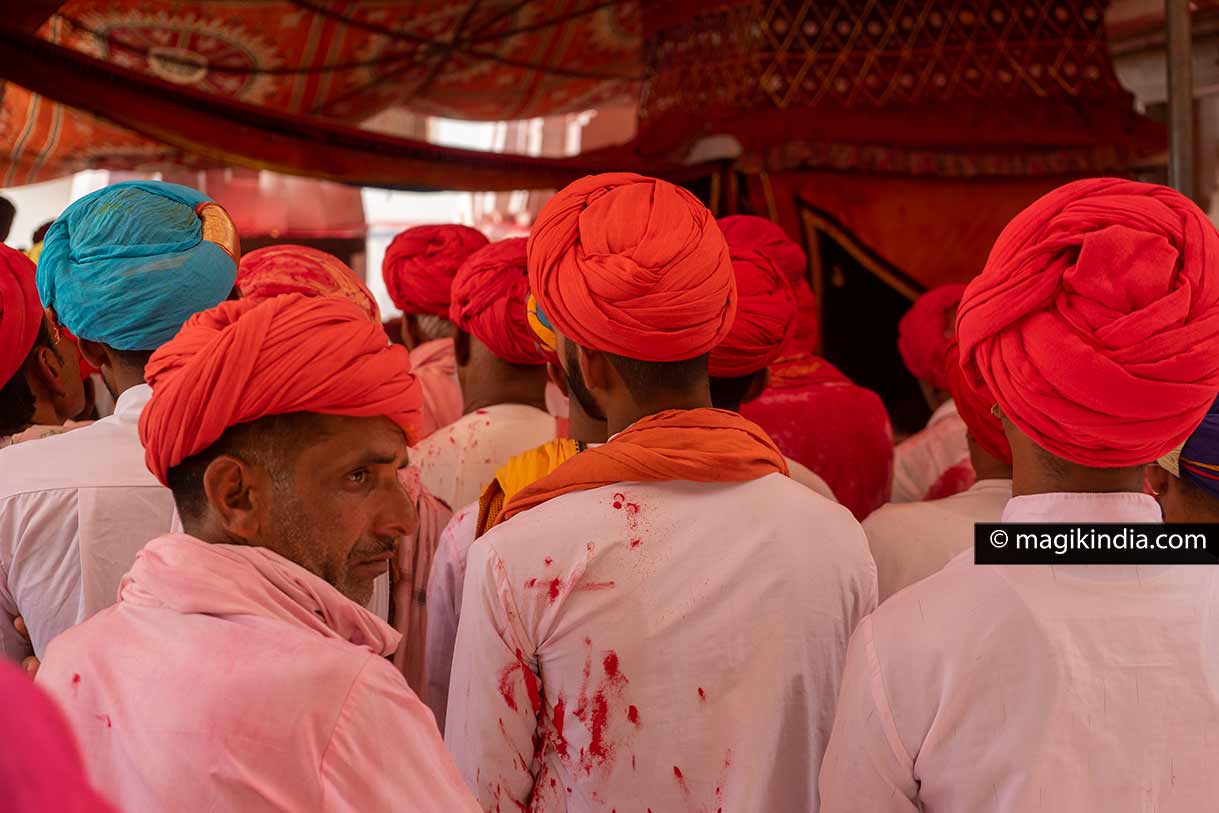 Participants during the Holi festival in Charbhuja

Holi in the Charbhuja shrine is one of my best memories of the festival of colours; the atmosphere is good-natured, far from the drunken and aggressive Holi of many cities. For the occasion, the Gurjar men wear their traditional garb, a brightly colored turban, a white dhoti and to top it off, a lavish gold necklace set with precious stones. Here, Holi lasts no less than 15 days and combines traditional dances, parades and battles of colored powders. 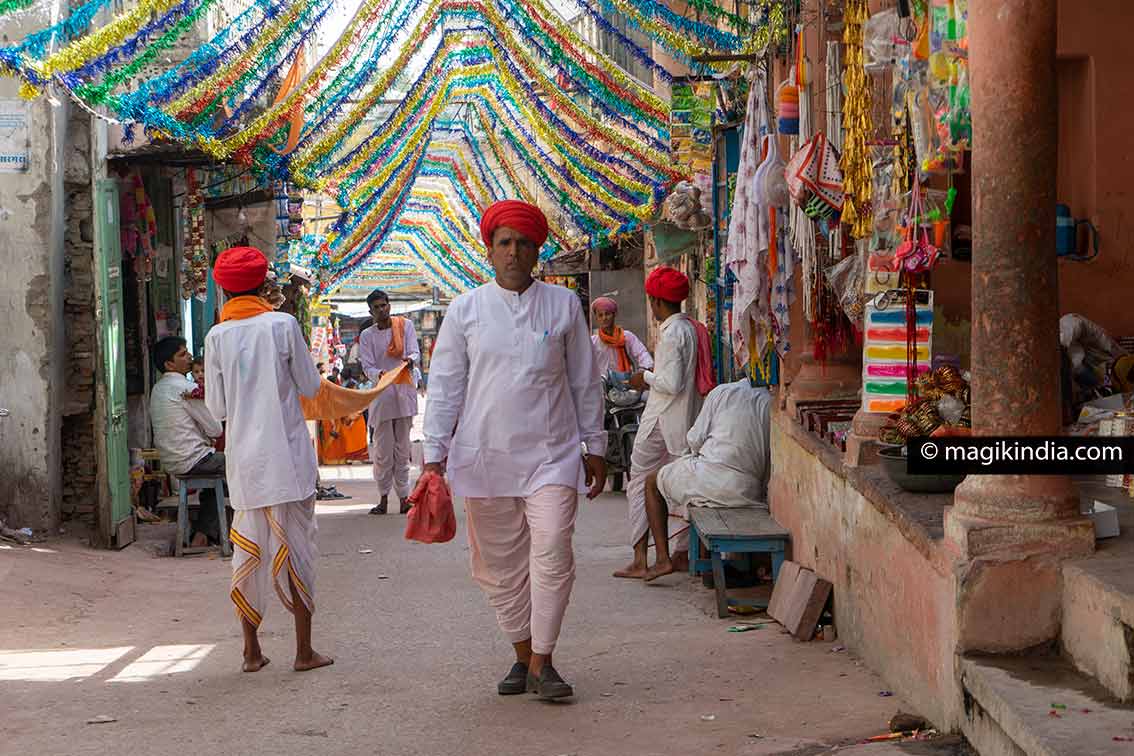 “Jhal Jhulni Ekadashi”, the other signature festival of Charbhuja Temple is observed during the Hindu month of Bhadrapad (August/September), during the waxing phase of the moon (Shukla Paksha), exactly 21 days after Krishna Janmashtami. Tens of thousands of faithful come from all the surrounding villages to take part in this colorful event. 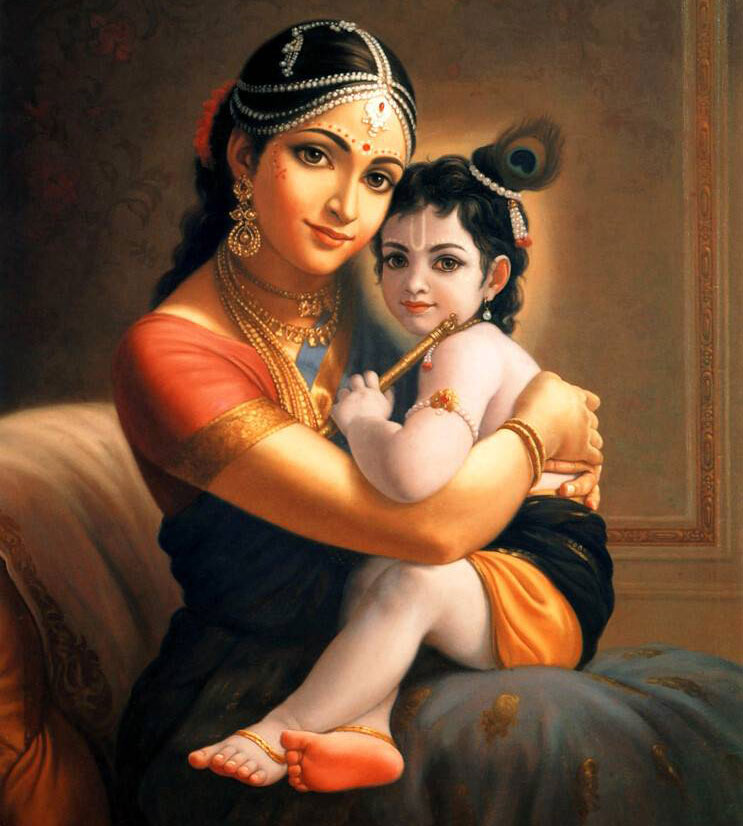 This festival is held in memory of Mata Yashoda, the adoptive mother of Lord Krishna, who washed the infant Krishna’s clothes on this day, after the Sutak period.

In Hinduism, Sutak is a time of seclusion when a child is born (and after a person dies). Family members of the newborn observe a Sutak period of 10 to 20 days depending on the community. They refrain from going to temples or attending ceremonies, for example. However, the general environment is jubilant and joyful. The new mother stays in her room with her newborn baby and they don’t go outside the house. The reason for this is that in ancient times there were many incurable diseases; this isolation allowed both mother and child not to be contaminated during a stage of physical weakness.

On Jhal Jhulni, the Uthsavar, the “double” of the temple statue, goes out in procession to Lake Dooth Talai, one kilometer from the village, in a silver palanquin carried by Gurjar men. The very compact crowd moves with difficulty while the powders of color break over the participants, so much so that after the procession, the streets of the village seem covered with a thick pink carpet. The statue’s clothes are washed in the lake and then, after several rituals, the idol is returned to the temple. Jhal Jhulni is undoubtedly one of the festivals of Rajasthan not to be missed! 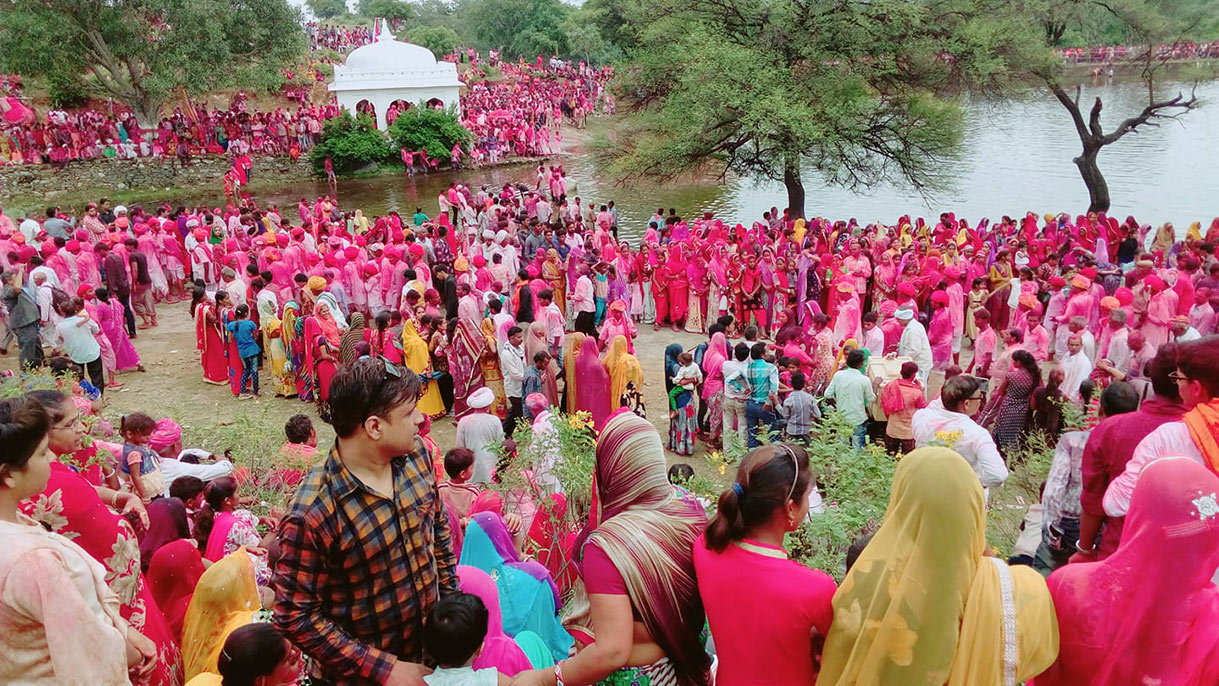 VOUS AIMEREZ PEUT-ETRE AUSSI...
Undavalli, the rock gem of Andhra Pradesh
The Undavalli Caves located 10 km from Vijayawada (Andhra Pradesh), are one of the best examples of rock art in In...
Holi, Festival of Colours of India
Holi is one of India's best-known festivals, providing great material for photographers from all over the world. I...
Osian, a caravanserais in Rajasthan
Gateway to the Thar Desert, the hamlet of Osian, 70 km from Jodhpur, takes us back in time to the days when camel ...
The most beautiful palaces of India
India has an unrivalled heritage influenced by a history that is several millennia old; the palaces are ...
Modhera Dance Festival, Gujarat
The Modhera Dance Festival or Uttarardh Mahotsav is set against the backdrop of Modhera's majestic sun temple, dre...
Kumbha Mela, the world's biggest pilgrimage
The name Kumbha Mela means "festival of the jar". It is probably the world's biggest pilgrimage; gathering up to 1...
← The Arts of Kutch Region, Gujarat
Than Jagir, the monastery of Kanphata yogis →