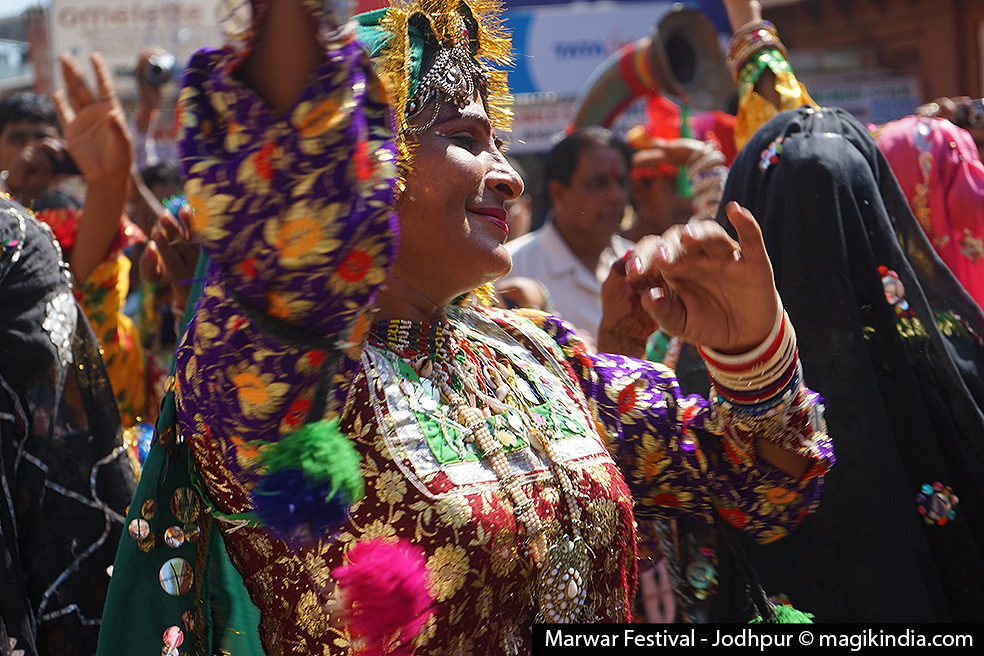 Indian tribal and folk dances are performed on many different occasions such as rites of passage, changes of season and religious and cultural festivals.

Some of them are by no means simple entertaining dances but have all the technical prowess of Indian classical dance and require years of learning and practice. They are usually taught within families or the community.

It is impossible to cover all the folk dances of a country as vast as India, but here we offer a few that we have chosen for their popularity or originality. 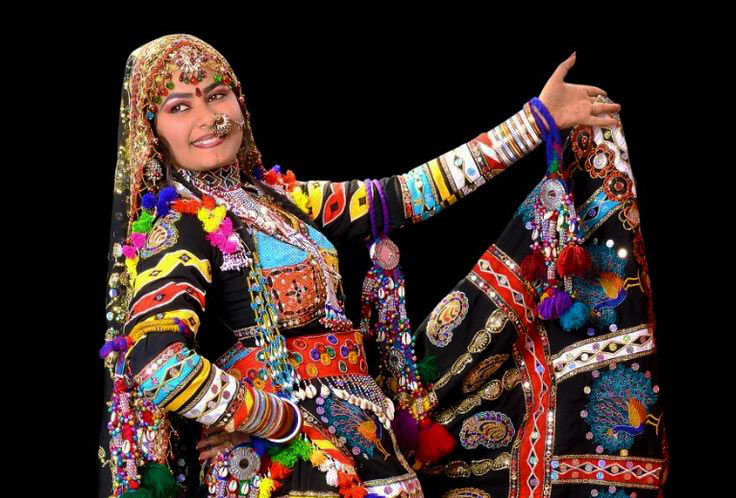 Once professional snake handlers, Kalbelia today evoke their former occupation in music and dance that is evolving in new and creative ways.

Since the enactment of the Wildlife Act of 1972, the Kalbelias have been pushed out of their traditional profession of snake handling. Today, performing arts are a major source of income for them and these have received widespread recognition within and outside India.The dancers are women in flowing black skirts who dance and swirl. All these cloths are mixed in red and black hues and embroidered in such a way that when these dancers perform these clothes represent a combination of colours soothing to eyes as well as to the atmosphere.

The male participants take care of the musical part of the dance. They use the different instruments such as the pungi, a woodwind instrument traditionally played to capture snakes, the dufli, been, the khanjari – a percussion instrument, morchang, khuralio and the dholak to create the rhythm on which the dancers perform.

Kalbelia songs are based on stories taken from Rajasthan folklore and mythology and special dances are performed during Holi. The Kalbelia have a reputation for composing lyrics spontaneously and improvising songs during performances. These songs and dances are part of an oral tradition that is handed down generations and for which there are neither texts nor training manuals. 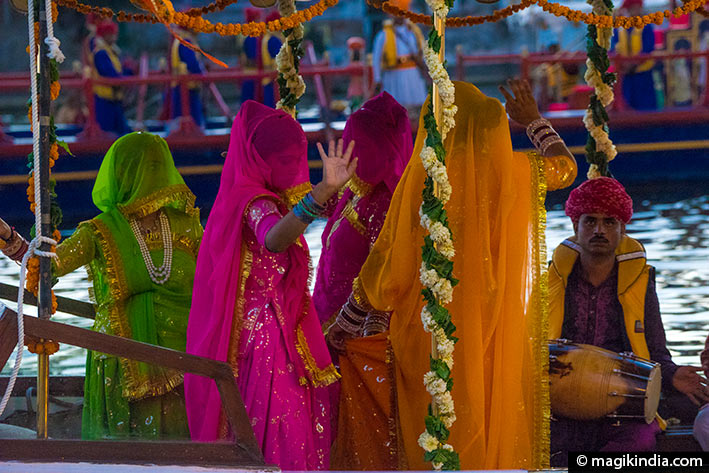 Ghoomar was developed by the Bhil tribe and was then adopted by other Rajasthani communities. It is performed by women in swirling robes, and accompanied by men and women singing together.

This folk dance gets its name from ‘ghoomna’, the pirouetting which displays the spectacular colors of the flowing ‘ghaghara’, the long skirt of the Rajasthani women. There is an amazing grace as the skirts flair slowly while the women twirl in circles, their faces covered with the help of veils.

They use measured steps and various graceful inclinations of the body, beating palms or snapping fingers at particular cadences while singing lilting songs. Mostly Goddess Saraswati is worshiped during this dance. This dance is usually done in a circle. 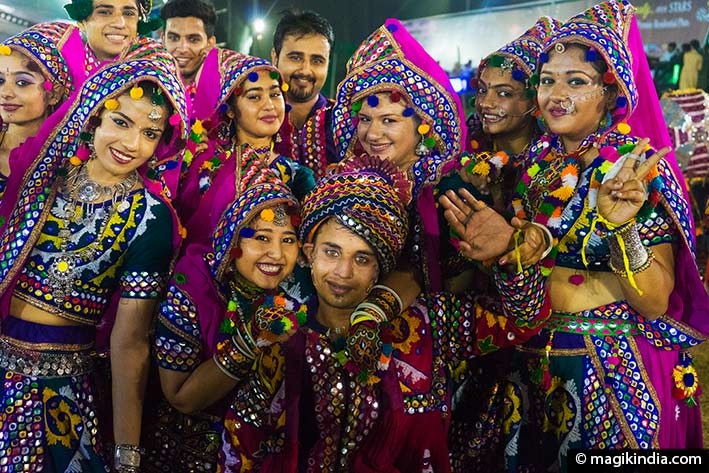 Garba is a form of dance that originated in the state of Gujarat in India. The name is derived from the Sanskrit term Garbha (“womb”) and Deep (“a small earthenware lamp”).

Many traditional garbas are performed around a centrally lit lamp or a picture or statue of the Goddess Durga, the feminine form of divinity. The circular and spiral figures of Garba have similarities to other spiritual dances, such as those of Sufi culture. Traditionally, it is performed during the nine-day Hindu festival Navaratri.

Originating as devotional Garba dances, which were always performed in Durga‘s honour, this dance form is actually the staging of a mock-fight between the Goddess and Mahishasura, the mighty demon-king, and is nicknamed “The Sword Dance”.

During the dance, dancers energetically whirl and move their feet and arms in a complicated, choreographed manner to the tune of the music with various rhythms. The dhol is used as well as complementary percussion instruments such as the dholak, tabla, bongos and others.The sticks (dandiyas) of the dance represent the swords of Durga.

Singhi Chham or Kanchendzonga Dance is a dance form in Sikkim whereby the dancers perform in a lion costume that represents the snow lion.

It is a dance of the Bhutia people, and was said to have been introduced by Chador Namgyal, the third Chogyal of Sikkim, in the 18th century.

It is usually performed during the Panglapsool festival. The dance is accompanied by a single drummer. It has religious association as the peaks of Kangchenjunga (Khang-Chen Dzong Pa), which is sacred to the people of Sikkim, are believed to resemble the legendary snow lion.

The Bihu is a group dance in which males and females dance together. In general, females follow stricter line or circle formations.

The most important musicians are the drummers (dhulia), who play a particular twin-faced drum, the dhol, slung from the neck and played with one stick and a palm.

Some other instruments that accompany this dance are the taal, a type of clash cymbal; the gogona, a reed and bamboo instrument; the toka, a bamboo clapper; and the xutuli, a clay whistle. Bamboo flutes are also often used. The songs (bihu geet) that accompany the dance have been handed down for many generations.

The term bhangra originally designated a particular dance performed by Sikh and Muslim men in the farming districts of the Punjab region of South Asia. The dance was associated primarily with the spring harvest festival Baisakhi, and it is from one of the major products of the harvest—bhang (hemp)—that bhangra drew its name.

After the partition in 1947, millions of people were relocated between the new nations of Pakistan and India. Most of the area in which community bhangra is practiced became contained within Pakistan, however the Sikh and Hindu participants moved to Punjab, India where the free form of traditional Bhangra developed.

By the 1990s, modern Bhangra was being staged in the Punjabi Diaspora, often characterized by a fusion with Western dance styles and the use of prerecorded audio mixes.

Since the 1990s universities and other organizations have held annual modern Bhangra dance competitions in many of the main cities of the United States, Canada, and England as well.

Chhau is a genre of Indian tribal martial dance which is popular in the Indian states of Odisha, Jharkhand and West Bengal.

The Chhau blends within it forms of both dance and martial practices employing mock combat techniques (called khel), stylized gaits of birds and animals (called chalis and topkas) and movements based on the chores of village housewives (called uflis).

The dance is performed by male dancers from families of traditional artists or from local communities and is performed at night in an open space, called akhada or asar, to traditional and folk music, played on the reed pipes mohuri and shehnai.

A variety of drums accompany the music ensemble including the dhol (a cylindrical drum), dhumsa (a large kettle drum) and kharka or chad-chadi. The themes for these dances include local legends, folklore and episodes from the Ramayana and Mahabharata and other abstract themes.

Raut Nacha is a dance performed by yadava/yaduvanshis, a community which considers themselves to be descendants of Krishna.

For them it is as a symbol of worship to Krishna. They perform the dance at the time of ‘dev udhni ekadashi’. It is believed that it is time of awakening of Gods after brief rest according to Hindu pancang (calendar).

The dance is a close resemblance of Krishna’s dance or ‘Raas Leela’. 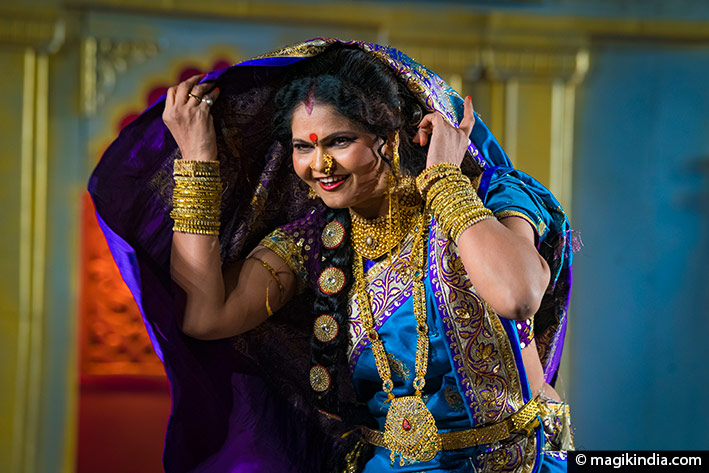 Lavani is a combination of traditional song and dance, which particularly performed to the beats of Dholki, a percussion instrument. Lavani is noted for its powerful rhythm. Lavani has contributed substantially to the development of Marathi folk theatre.

Traditionally, this genre of folk dance deals with different and varied subject matters such as society, religion, politics and romance. Originally, it was used as a form of entertainment and morale booster to the tired soldiers.

The ladies that perform lavani wear a long sari length around 9 metres. They form a bun (juda in Hindi or ambada in marathi) with their hair. They usually put a large bindi of dark red colour on their forehead. The sari they wear is called navvari. The sari is Wrapped beautifully and is much more comfortable as compared to other sari types.

In this dance of Uttar Pradesh, veiled women balancing large multi-tiered circular wooden pyramids on their heads dance to songs about Krishna. Each pyramid has 108 lighted oil lamps arranged in a spiral. It is specially performed on the third day after Holi. It is believed that on that day Radha was born.

According to legend, Radha’s grandmother ran out of the house with the charkula on her head to announce the birth of Radha, Since then, Charkula has formed a popular dance form of Brajbhoomi, performed during various festivities.

It is believed that the Charkula dance celebrates the happy victory over Indra by Krishna and the cowherd community of Braj. This dance, therefore, became a symbol of happiness as well as joyful rapture. Krishna raised the mount Govardhan and as if to re-enact the Govardhan Leela the dancing damsel of Braj raises the 50 Kilo Charkula on her head while performing the Charkula dance.

The dance troop usually consists of two, four or six members. A lead singer in the troupe narrates the story of Daksha yajna as the dance is being performed. A huge decorative pole called Nandikolu which has an orange flag at the top is held by one of the dancers. Traditional percussion instruments called sambal and dimmu lend music to the dance. Cymbals and shehnai and other instruments like karadi and chamala are also used. The dance also involves a ritualistic piercing of a needle across the mouth.

Also named kolattam, ‘stick dance’, this dance is one of the most popular dance narratives in Andhra Pradesh. It’s a rural art usually performed during village festivals. It is a combination of rhythmic movements, songs and music.

The Kolattam group comprises dancers ranging from 8 to 40 where they are grouped in pairs. The sticks provides the main rhythm. The dancers are led by the leader and move about in two circles. The inner circle receive the strikes on their sticks from the artists in the outer circle that deliver them. 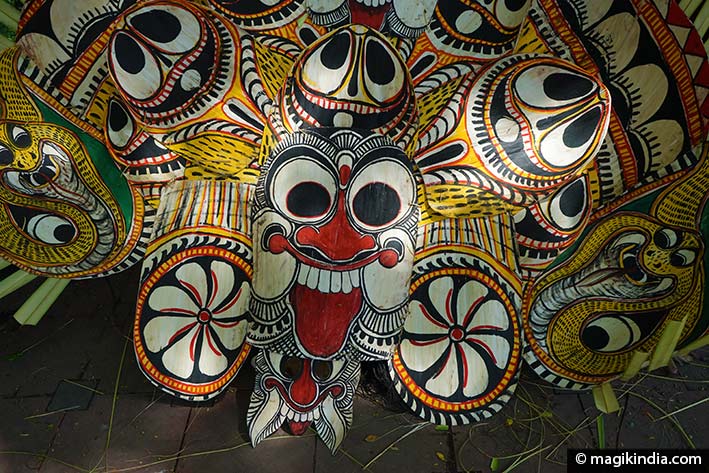 Also called Padeni, (from the Malayalam word for military formations) padayani is a traditional folk dance and a ritual art from the central portion of the Indian state of Kerala. A ceremonial dance involving masks, it is an ancient ritual performed in Bhagavati temples.

The dance is performed in honor of Bhadrakaali. Meaning, a ‘row of warriors’, Padayani is an art form that blends music, dance, theatre, satire, facial masks, and paintings. It is part of worship of Bhadrakali and is staged in temples dedicated to the goddess from mid-December to mid-May. Padayani is regarded as a remnant of the Dravidian forms of worship that existed before the advent of Brahmanism. 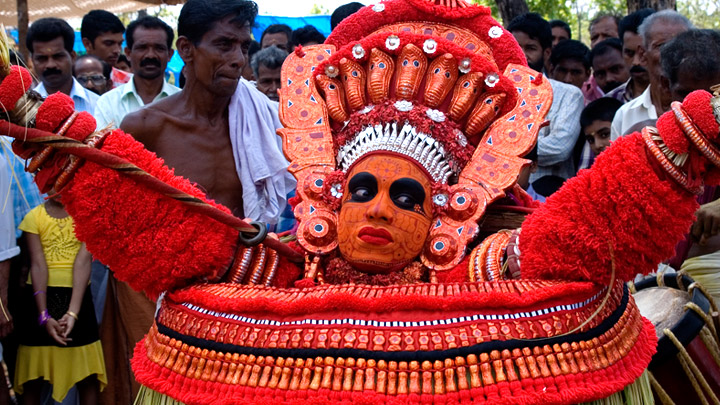 Theyyam also known as Kaliyattam, it is a ritual dance popular in north Kerala or the erstwhile Kolathunadu. Theyyam incorporates dance, mime and music and enshrines the rudiments of ancient tribal cultures which attached great importance to the worship of heroes and the spirits of ancestors.

There are over 400 kind of Theyyams. These are performed in front of shrines, without stage or curtains, by persons belonging to the Vannan, Malayan and other related castes.

‘Thudangal’ (the beginning) and ‘Thottam’ (the invocation) are the introductory rituals of the Theyyam or the Thira, as it is known in south Malabar. The headgear and other ornamental decorations are spectacular in sheer size and appearance.

2 Comments on “Folk Dances of India”