In Tamil Nadu, the nine-day Navaratri festival honoring the Shakti or universal primordial force, is celebrated in a unique way by venerating successively three goddesses: Durga, Lakshmi and Saraswati; three days are dedicated to each of them. This festival punctuated by precise rituals symbolically ends with the victory of light over darkness called Vijayadashami.

The nine nights of Navaratri

In Sanskrit, Nava means ‘nine’ and Ratri ‘night’, the festival is thus celebrated for 9 nights and 1 day, the tenth day being that of Vijayadashami.

The first three nights of Navaratri are dedicated to Durga, the warrior goddess, whose mount is a lion or tiger. She symbolises the forces of destruction and the impurities of the mind.

The last three nights are dedicated to Saraswati, who holds a veena (a stringed instrument) and symbolises art and wisdom.

On the next three nights, Lakshmi is worshipped. Seated or standing on a lotus, gold coins pouring from her right hand, she symbolises spiritual prosperity and plenty.

Symbolically, Durga symbolizes the transformation of the universe and everything in it, Lakshmi represents preservation and Saraswati embodies creation.

“Durga brings out the concealed negativity and Kali destroys this negativity; Durga reveals the hidden garbage and Kali completes the inner cleansing. After three days of removing the ‘weeds’ from the field in this way, the moment comes to plant the seeds. These next three days are Lakshmi’s time to act, purifying our intentions and hearts. After ploughing for three days, it’s time to harvest what you have sown. During the last three days Saraswati manifests herself, bringing wisdom, creativity and clarity of speech.” (source: pathheart)

The 9th day, the day before the victory of light, is called

‘Ayudha puja’: The blessing of the tools

Originally, the warriors had their weapons blessed. Nowadays, all the tools used by people for their work are blessed. Farmers, for example, have their agricultural tools blessed, musicians their musical instruments and students their study books. The vehicles are also blessed.

The small tools and instruments are placed at the foot of the Kolu (see below), a pottu (a point) of sandalwood paste and kumkum is applied to each tool and a flame offering is made (aarti).

The tenth day is commonly called Vijayadashami, the day of victory of light over darkness.

According to Hindu mythology, Vijayadashami is the day the goddess Durga defeated the demon god Mahishasura. Symbolically, it means you have conquered all the qualities of the previous 9 days. It is a day of good omen for starting a new job or a new business. 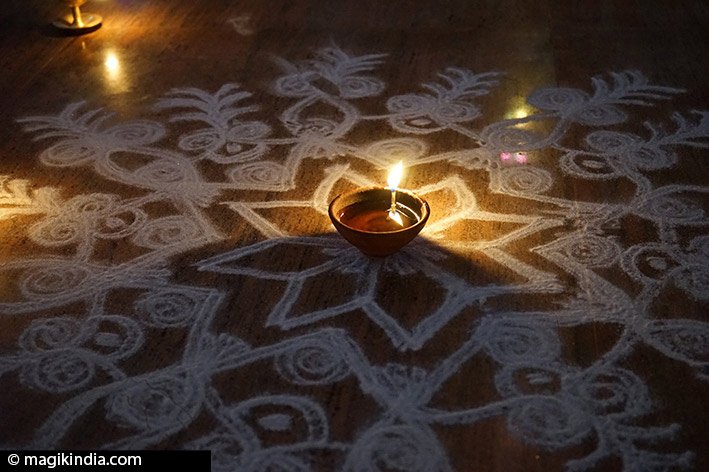 During festivals in Tamil Nadu and in a large part of India, the front of the temples and houses is decorated with Kolams (Rangolis in North India). They are geometric designs made on the ground with rice flour or colored chalk powder. Hindus believe that Kolams bring prosperity and good luck. 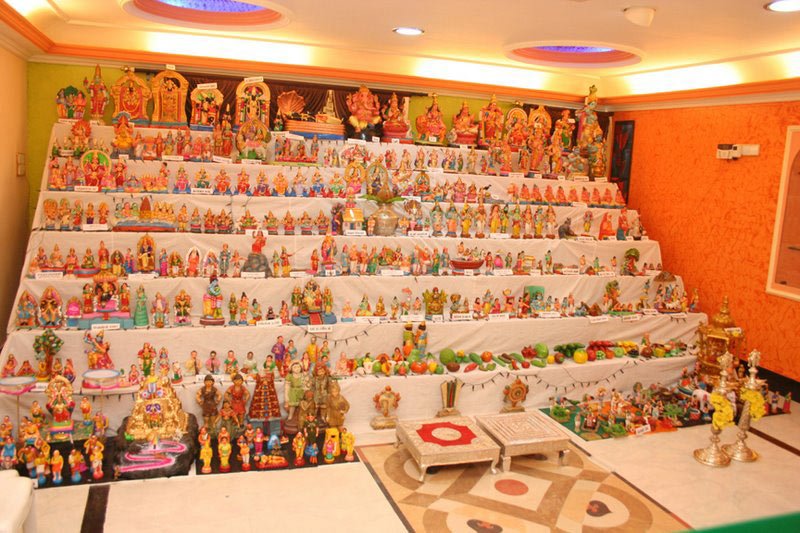 On the first day of Navaratri, after a ritual to Ganesha, the elephant-headed god, a welcoming ritual called ‘Kalasa Ahvanam’ is performed to the goddesses Durga, Lakshmi and Saraswati.

This ritual is followed by the construction of a staircase made of odd-numbered wooden shelves called ‘Kolu‘. After the Kolu has been covered with a cloth, various figurines are neatly placed.

The word Tamil ‘kolu’ means ‘audience at the royal court’. The word was used in ancient times when the king granted Audience to his people.

Thus, the sacred figurines, just like the king, are supposed to grant audience to the devotees. Kolu represents scenes of Hindu mythology as well as scenes of everyday life. 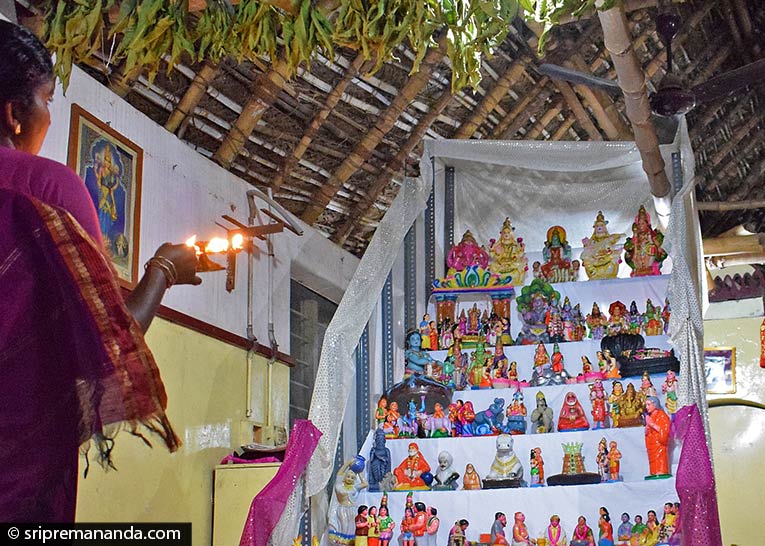 Traditionally, the most important figurines in a Kolu are the ‘Marapaachi’ ie those carved in the wood. Among them, the wooden figurines of married couple called ‘Marapacchi Bommai’ are the most appreciated; they are decorated with new clothes every year and passed from generation to generation to the bride of the family. 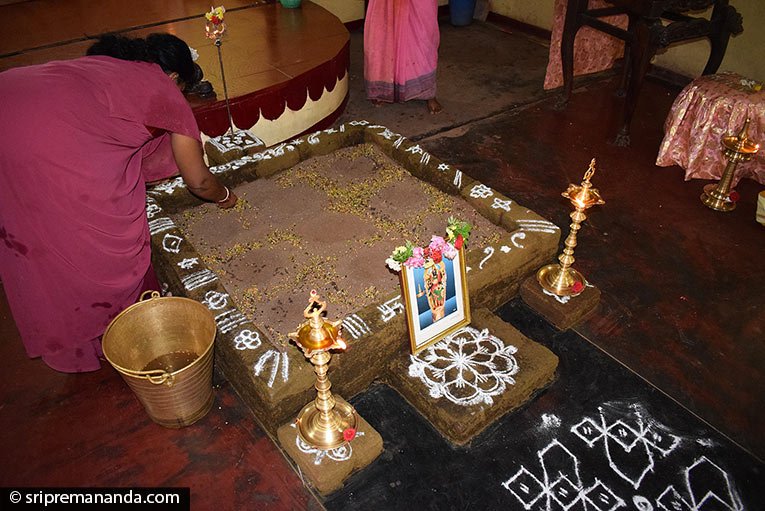 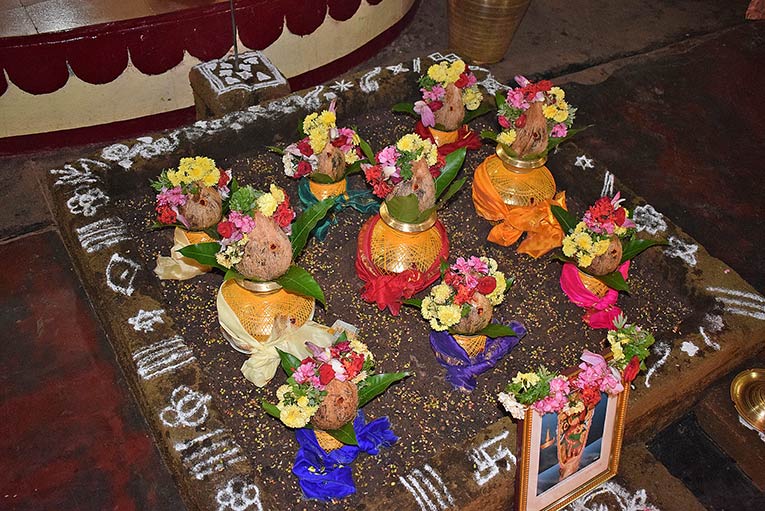 Each seed represents a different kind of ‘Shakti’. These seeds are watered daily during a ritual and if they grow vigorously, this is considered a good omen for the year to come.

Nine kumbams (traditional brass pots) with coconuts on the top are also placed in the planter. On the last day of Navaratri, these nine pots are poured on the statue of the Divine Mother. It is said that the seven sacred rivers of India* are then in these kumbams and give the statue a divine vibration.

Abhishekam is a Sanskrit term for an activity of devotion, which consists of pouring libations on the statue of the deity, punctuated by the sound of the mantras.

The statue is also washed with lime and vibhuti (scented ash), she is dried and ‘pottu’ (dots) of sandalwood paste and Kumkum are applied. The statue is then dressed in beautiful clothes and decorated with garlands of fragrant flowers.

The abhishekam is actually a symbolic act of inner purification, it is not the statue that is dirty and needs to be washed but our inner Self.

Here is what Swami Premananda, a holy man of Tamil Nadu, says about the Abishekam: ““We give names to describe God. We call it God, Lakshmi, Muruga and so on but we cannot see that great energy, the Divine. You do an abhishekam and wash the statue of the Divine Mother in the Ashram. You give the statue a name and put it in a particular place. But you are not doing abhishekam to the divine shakti – only to the statue. Where is the divine shakti? That shakti is inside you. You do the pooja to the shakti outside but you have to come to the stage where you do the pooja to the shakti, the divine energy, within you. You are doing the ‘outside’ pooja. Now you must do the ‘inside’ pooja. The first stage is doing the pooja to the deity, the second stage is doing the pooja inside yourself.”

VOUS AIMEREZ PEUT-ETRE AUSSI...
The most revered Jain places in India
Jainism derives from the Sanskrit verb 'ji', meaning 'to conquer'. This refers to the battle that Jain ascetics mu...
Gwalior, once the pearl of the Mughal Empire
Gwalior, the fourth largest town in the State of Madhya Pradesh, owes its fame to the fort, perched atop a 300ft h...
Chhath Puja, thanksgiving to the Sun God
Originally from the state of Bihar, in north-east India, the festival Chhath Puja celebrates and thanks Surya and ...
Pushkar Camel Fair
Once a year, at Kartik Purnima, the full moon in the October-November lunar month, there are festivities in honour...
Varanasi, the spiritual capital of India
They say that Brahma the creator god once declared, "I had to create the world several times but Varanasi is...
Courtallam (Kutralam), the Spa of South India
Courtallam or Kutralam is a heavenly place with a vegetation as exuberant as in neighbouring Kerala. Kutralam&nbsp...
← Gavari, the mystical folk-opera of the Bhils
The Sandhya mural art of Udaipur →