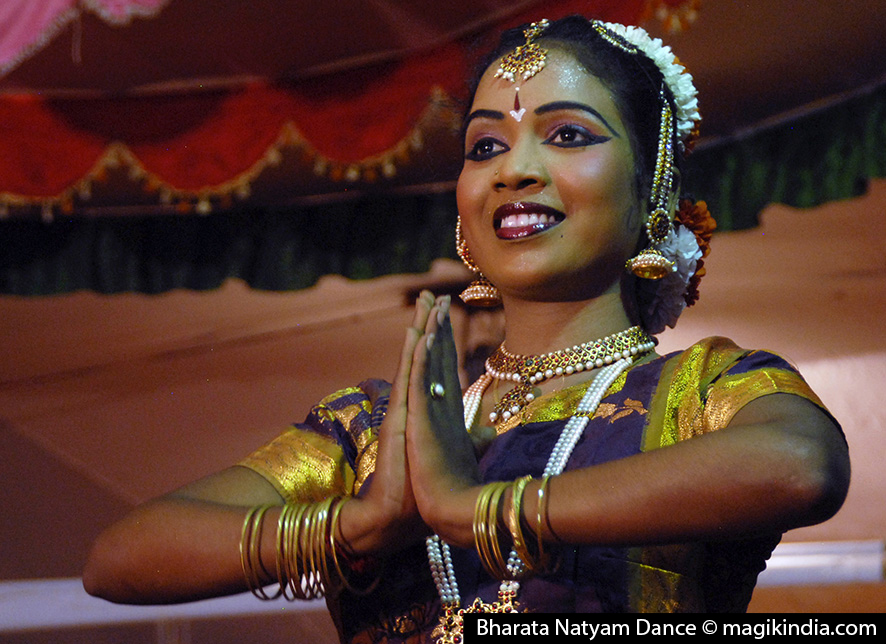 Dance, like music, is a deeply rooted part of Indian culture. The earliest written traces of it are in the Vedas and the Natya Shastra, an ancient treatise of the performing arts.

The Natya Shastra (from the Sanskrit natya (drama) and shastra (treatise)), is an encyclopaedic tome written in the 2nd century CE and attributed to Bharata Muni. It lays down the foundations of Indian theatre and is regarded as the fifth Veda.

It consists of 38 chapters describing the rules of prosody and diction, character types, how to represent feelings, and the movements of the limbs. Sixty-eight mudras (hand positions) and 36 eye movements are described precisely. It is still the foundation of all theatrical creation in India. 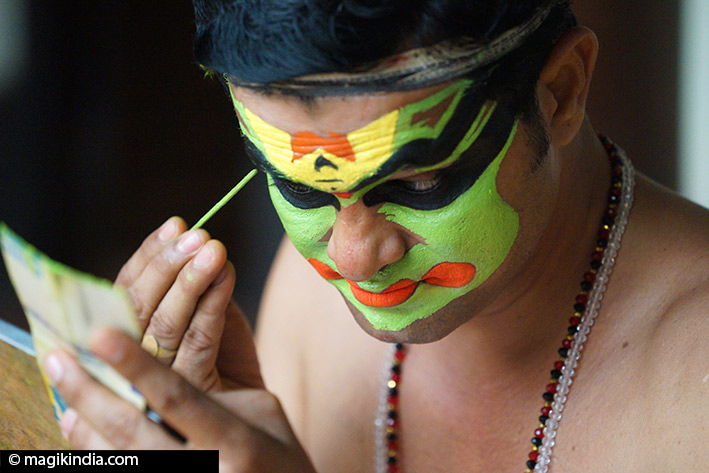 The classical dances were formally defined by the Sangeet Natak Akademi, which was set up by the education ministry in 1952 to promote and preserve the vast cultural heritage of India’s music, dance and theatre.

A dance is considered “classical” if it incorporates techniques described in the Natya Shastra.

Bharata Natyam, which emerged in Tamil Nadu in South India, is considered the oldest Indian classical dance form still practiced. It originated in the early years of the Common Era (Christian era).

Although the dance form itself is old, the name Bharata Natyam has only been used since the 20th century. It means “Dance of India”, Bharat being the old name for India. Bharata is also said to be a composite word made up of Bha from bhavam (emotion, facial expression), Ra from ragam (melodic mode) and Ta from thalam (rhythm). It is also associated with the name of Bharata Muni, author of the Natya Shastra.

Natyam is simply the Tamil word for “dance”.

In the old days, Bharata Natyam was called Dakshinatya and was performed in Hindu temples by devadasi or “servants of the gods”, girls and women trained to perform rituals and to dance and sing in the temples as an offering to the gods. The kings of the Pallava, Chola, Pandya, Nayaka and Maratha dynasties kept up the tradition and also invited the women to dance at court.

Bharata Natyam began to decline with the Mughal invasions and the fall of the Hindu kingdoms in the South.

Bharata Natyam was codified in the form known today during the reign of the Maratha king Saraboji II (1798-1832), by the Tanjore Quartet. These four musician brothers at the Tanjore court, Chinnayya Pillai, Ponniah Pillai, Sivanandam Pillai and Vadivelu Pillai, also made a major contribution to music.

In the late 19th century India’s British rulers, regarding the devadasi as prostitutes, passed a law abolishing their status and banning the dance from the temples. From then on women were excluded from temple service and only men were allowed to perform temple rituals.

In the 20th century a complete restructuring took place. The dance of the devadasi was revived as a stage performance and Bharata Natyam became an artistic and academic discipline. 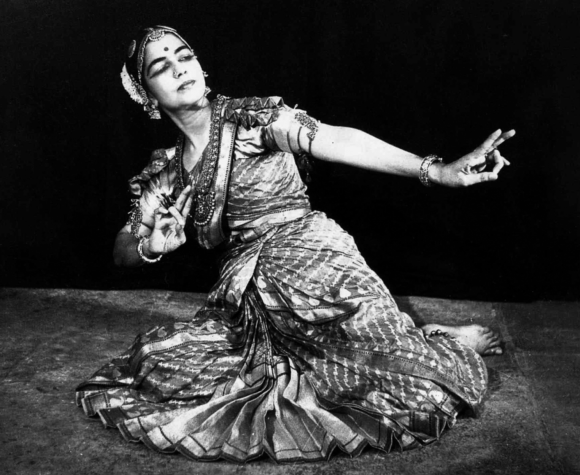 The emergence of the celebrated dancer Rukmini Devi opened a new chapter in the history of Bharata Natyam. It was she who gave it that name. She also refined the dance and in 1936 set up the Kalakshetra academy with the help of scholars, musicians and renowned dance masters.

A new revival period began after India’s independence and today there are countless schools and institutions around the world teaching Bharata Natyam.

The choreography consists of six tableaus presented in an order laid down by tradition. The dancers use their whole bodies, including the face and eyes, in accordance with the Natya Shastra rules.

The stage is also arranged according to precise rules. To the left are the musicians and the singer or singers, led by the nattuvanar, who sets the beat with finger cymbals. The rhythm is sustained by a percussionist on the mridangam, a horizontal two-ended drum. The music is Carnatic in style.

Odissi originated in Odisha, East India. Although its origins date back 2000 years, like Baratha Natyam it had virtually disappeared during the colonial period. Odissi as danced today is a reconstruction.

India’s independence brought a major change to Indian dance. Like the other classical arts, dance was regarded as a way of asserting India’s national identity. The patronage of government institutions and NGOs increased considerably and the few Odissi dancers who remained began the vast enterprise of reconstructing the dance. This involved closely reading ancient texts and attentively examining the dance postures represented in temple bas-reliefs such as those in the Udayagiri and Khandagiri caves.

One of the most characteristic features of the Odissi dance is the tribhangi or “three part” posture, in which the body is angled at the neck and hip so that the head, trunk and legs form a serpentine S curve. This creates very characteristic poses that are more sensual and supple than those found in other Indian classical dances.

The themes addressed in Odissi are almost entirely religious. Most are about the god Krishna and his beloved Radha.

Kathakali is recent compared to other Indian classical dance traditions; it emerged in the 18th century in Kerala, South India. It is a form of danced drama; in the Malayalam language katha means “story” and kali means “game” or “play”.

Kathakali is a spectacular combination of drama, dance, music and ritual.

The performers, with sophisticated costumes and elaborate makeup, reconstitute episodes from Hindu epics like the Mahabharata and Ramayana or the life of the god Krishna.

A Kathakali show used once to be lit by oil lamps and generally lasted 12 hours, from dusk to dawn. This has been reduced to three or four hours but some temples in Kerala continue the old tradition, especially during festivals such as Onam.

Normally all the characters in Kathakali, both male and female, are played by men. However, in recent years some women have found a place in the tight circle of Kathakali performers.

The extremely complex makeup, based on rice paste, is applied by specialist makeup artists. It can take several hours to make up the dancers before a performance.

The dancers are accompanied onstage by musicians and two singers. The instruments used are the maddalam (a horizontal drum), chenda (a vertical drum) and itekka (a small drum played for female characters), plus cymbals and a gong played by the singers.

The language of Kathakali songs is Manipravalam, a mixture of Sanskrit and Tamil used in liturgies. As a rule they are sung to ragas of the South Indian Carnatic tradition. There is a particular Kerala style of rendition called sopanam sangitam, based on Vedic hymns. 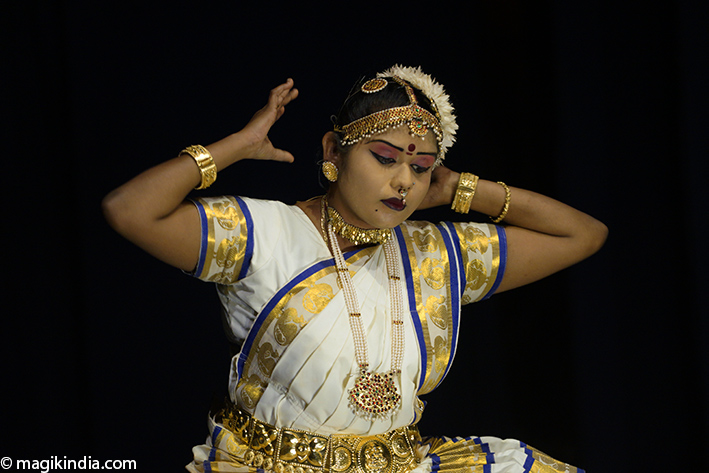 Mohiniyattam is a classical dance form from Kerala, India. The term Mohiniyattam comes from the words “Mohini” meaning a woman who enchants onlookers and “aattam” meaning graceful and sensuous body movements. The word “Mohiniyattam” literally means “dance of the enchantress”.

There are two arguments on the etymology of this dance form. One being the historical lineage and the other being the mythological lineage.

Then the mythical lineage is explained with two stories of the Lord Vishnu disguised as a Mohini. In one, he appears as Mohini to lure the asuras (demons) away from the amrita (nectar of immortality) obtained during the churning of the palazhi (ocean of milk and salt water).

In the second story Vishnu appears as Mohini to save Lord Shiva from the demon Bhasmasura. The name Mohiniyattam may have been coined after Lord Vishnu; the main theme of the dance is love and devotion to God, with usually Vishnu or Krishna being the hero.

The dance involves the swaying of broad hips and the gentle movements of erect posture from side to side. There are approximately 40 basic movements, known as atavukal.

The costume includes white sari embroidered with bright golden brocade (known as kasavu) at the edges.

The vocal music of Mohiniyattam involves variations in rhythmic structure known as chollu. The lyrics are in Manipravalam, a mixture of Sanskrit and Malayalam.

Kathak is a traditional narrative dance from North India. Originally a religious dance form, Kathak evolved during the Islamic period into a form intended more for entertainment.

After a propitiatory introduction, passages of pure dance alternate with narrative passages. The circular movements of the hands and wrists give the dance its characteristic style. The pace of the dance accelerates from a slow beginning.

The dancer must deploy great physical energy and her movements must be graceful despite the very rapid pace of the dance. Hand movements are as important as the intricate, rhythmic footwork. Also typical of Kathak are its pirouettes and statuesque poses.

Kuchipudi originated in a village of that name in the South Indian state of Andhra Pradesh.

Like most Indian classical dances, it used to be danced in temples, and only by Brahmin priests, who played both male and female parts. Today Kuchipudi can be danced by women and even as a solo dance.

Kuchipudi always begins with traditional prayers and offerings and is accompanied by strongly rhythmic Carnatic music.

It is renowned for the fluidity of the dancers’ movements.

The most remarkable of the many dance figures in Kuchipudi is the tarangam or “tray dance”, in which the dancer demonstrates his or her rhythmic prowess while dancing on the edge of a brass tray.

Whereas most Indian classical dances have had to be reconstructed, Sattriya has been a living tradition since it was created in the 15th century by the saint Mahapurush Sankardeva, founder of the Assam Vaishnavite religion.

Sankardeva introduced the theatrical Sattriya dance in Assam as a way of propagating the Vaishnavite faith. For centuries it was danced, nourished and preserved in sattras or Vaishnavite monasteries – whence its name.

Sattriya is largely based on classical dance principals, combined with folk dances of various Assam ethnic groups including the Mishings and Bodos. It is these that give it its unique character.

Manipuri dance originates from Manipur, a state in north-eastern India on the border with Burma.

The traditional Manipuri dance style embodies delicate, lyrical and graceful movements. The aim is to make rounded movements and avoid any jerks, sharp edges or straight lines. It is this which gives Manipuri dance its undulating and soft appearance. Manipuri dancers do not wear ankle bells to accentuate the beats tapped out by the feet, in contrast with other Indian dance forms, and the dancers’ feet never strike the ground hard.

The most obliging aspect of Manipuri culture is that, it has retained the ancient ritual based dances and folk dances along with the later developed classical Manipuri dance style. Among the classical categories, ‘Ras Leela’ – a highly evolved dance drama, choreographed on ‘Vaishnavite Padavalis’ composed by mainly eminent Bengali poets and some Manipuri Gurus, is the highest expression of artistic genius, devotion and excellence of the Manipuris.

4 Comments on “Classical dances of India”