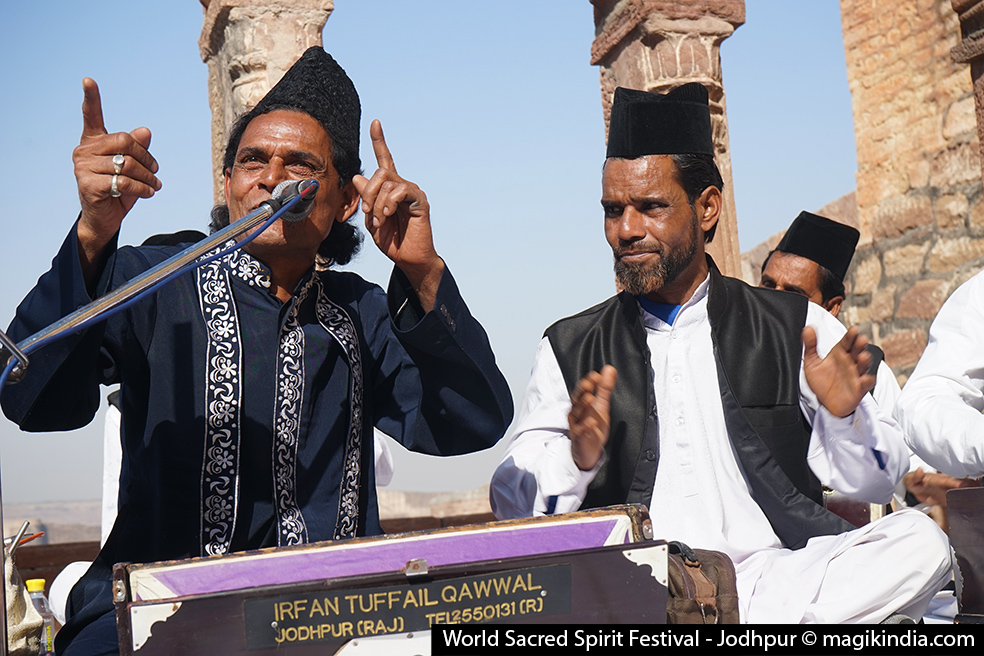 Thumri is one of the most important forms of North Indian music after the khayal classical form. Its exact origins are not very clear. First appearance of Thumri go back to 15th century. Thumri arose in popularity during the 19th century in the Lucknow court of nawab Wajid Ali Shah. At that time, it was a song sung by courtesans, accompanied by dancers.

The text is romantic or devotional in nature, and usually revolves around love for Krishna. Thumri is characterized by its sensuality, and by a greater flexibility with the raga.

Dadra is a semi classical form that is somewhat similar to thumri. It was originally accompanied by ‘dadra’  tala (6 beats) from where the term for the genre was borrowed, but later dadra compositions are often found in other light talas such as ‘keherwa’.

Qawwali is a form of Sufi devotional music popular in North India. It is a musical tradition that stretches back for more than 700 years. in the late 13th century in India, Delhi’s Sufi saint Amir Khusro Dehlavi of the Chisti order of Sufis is credited with fusing the Persian, Arabic, Turkish, and Indian musical traditions to create Qawwali as we know it today.

Originally performed mainly at Sufi shrines or dargahs throughout South Asia, it has also gained international popularity through the work of the late Pakistani singer Nusrat Fateh Ali Khan.

The songs which constitute the qawwali repertoire are primarily in Urdu and Punjabi.

The poetry is implicitly understood to be spiritual in its meaning, even though the lyrics can sometimes sound wildly secular, or outright hedonistic. The central themes of qawwali are love, devotion and longing (of man for the Divine).

A group of qawwali musicians, called a party (or Humnawa in Urdu), typically consists of eight or nine men including a lead singer, one or two side singers, one or two harmoniums. If there is only one percussionist, he plays the tabla and dholak, usually the tabla with the dominant hand and the dholak with the other one.There is also a chorus of four or five men who repeat key verses, and who aid percussion by hand-clapping.

The ghazal is a poetic form consisting of rhyming couplets and a refrain, with each line sharing the same meter. A ghazal may be understood as a poetic expression of both the pain of loss or separation and the beauty of love in spite of that pain.

The form is ancient, originating in Arabic poetry in Arabia long before the birth of Islam.

The ghazal spread into South Asia in the 12th century due to the influence of Sufi mystics and the courts of the new Islamic Sultanate.

The subject of love can usually be interpreted for a higher being or for a mortal beloved. The love is always viewed as something that will complete a human being, and if attained will lift him or her into the ranks of the wise, or will bring satisfaction to the soul of the poet.

A bhajan, from the Sanskrit bhajana (worship) is a Hindu devotional hymn to a god (such as Shiva, Krishna, Lakshmi or Ganesh) or a holy person. Bhajans are sung throughout India, taking different forms in different regions. Bhajan singing has great appeal for many Westerners, too.

The practice of bhajans has its roots in the hymns of the Sama Veda, the fourth Veda in the Hindu scriptures. Some of these songs are very old, while others are modern compositions.

Bhajans express love for the divine, focusing on particular attributes or virtues of a god. These hymns are part of bhakti yoga, the aim of which is to focus the believer’s attention on spirituality instead of the material world, and so lead to spiritual awakening.

Bhajans are lively and mesmerising. I often call them “Hindu Gospel songs”. Because of their typically repetitive style, words, tunes and rhythms, these songs very quickly become familiar and singing them produces a liberating ecstatic state.

Bhajan singing is group singing with a lead singer. Each phrase is repeated twice to a slow rhythm, then once at a faster pace. The singers are accompanied by instruments such as the harmonium for melody and the tabla for rhythm.

The art of bhajan can also be more sophisticated, as in the dhrupad and kriti genres which are based on the ragas and talas of Indian classical music.

The kirtan, from the Sanskrit kirtana (a prayer to God), is similar to the bhajan; the word is applied to the devotional songs of various spiritual traditions in India sung to the accompaniment of harmonium and tabla. Bhakti yoga has adopted the practice as part of its tradition.

Kirtans are longer than bhajans and are sung at a faster tempo. In North India, mainly in Krishna temples, devotees often dance to kirtans.