The most famous Indian Beverages

A selection of the most popular non-alcoholic beverages of India. 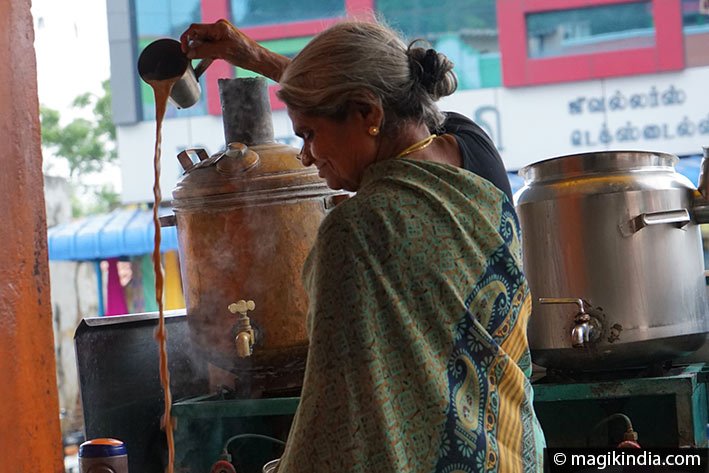 Let’s start by the most popular beverages of India: chai tea!

Chai is a black tea with milk and a good dose of sugar :). Mixed with spices, it takes the name of “masala chaï”. The word chai (tea in Hindi) is the name given in the north of India, in Tamil Nadu it is called Teythani or Teyilai.

There is no fixed recipe or preparation method for masala chai and many families have their own versions of the tea. Most chai contains 1/3 of black tea. Usually, a specific type of Assam is used called “mamri”, a granuled tea.

For a masala chai, the spice mixture, called Karha, uses a base of ground ginger and green cardamom pods. Other spices are usually added to this base like cinnamon, star anise, fennel seeds, peppercorn, nutmeg, cloves and also lemongrass and mint like in Gujarat. Certain type of spices will be used according to the season. 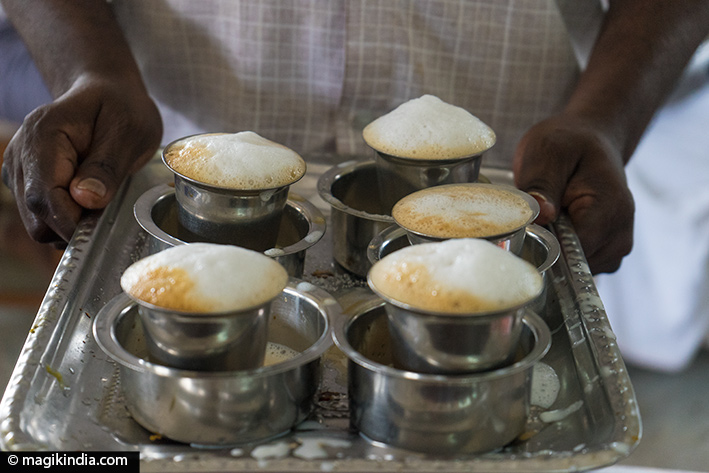 Indian coffee is made by mixing frothed and boiled milk with coffee powder in a traditional Indian filter.

The drink is also known as kaapi (the South Indian phonetic rendering of “coffee”). Outside India, the term “filter coffee” may refer to drip brew.

The most commonly used coffee beans are arabica and robusta of South India hills.

In South India, the coffee is drunk from the tumbler but is often cooled first with a “dabarah” a wide metal saucer with lipped walls. 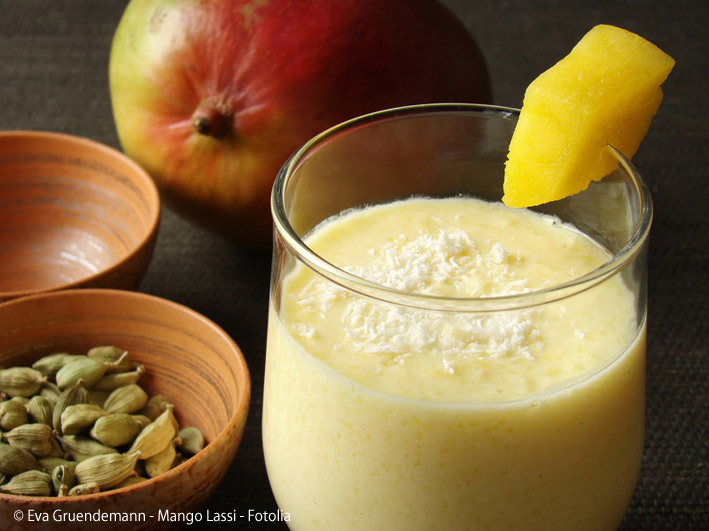 Another famous drink of India. Lassi is a blend of yogurt and water.

Traditional lassi is a savoury drink, sometimes flavoured with ground and roasted cumin.

Sweet lassi, however, contains sugar or fruits, instead of spices. Lassis are enjoyed chilled as a hot-weather refreshment, mostly taken with lunch. 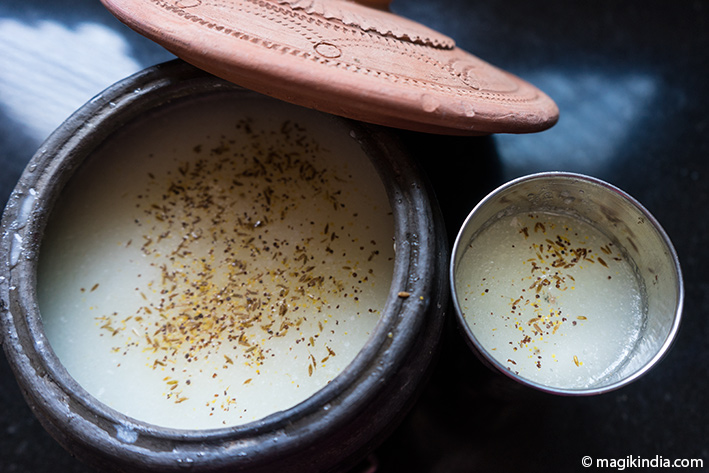 Chaas, pronounced ‘Chaach’ is a yogurt-based drink popular across India. It is a kind of buttermilk.

Chaas is made by churning yogurt and cold water together in a pot, using a hand-held instrument called madhani (whipper).

This can be consumed plain or seasoned with a variety of spices.

Chaas is very close to Lassi, with two major differences: Chaas is more dilute (with water) than lassi and unlike lassi, Chaas does not have added sugar.

Chaas can be consumed plain, but a little salt is usually added. Numerous other seasonings and spices can be added to salted Chaas, either singly or in combination with each other. The spices which can be added thus are: Coarsely ground and roasted cumin seeds, curry leaves, asafoetida, grated ginger, very finely diced green chillies and Mustard seeds. 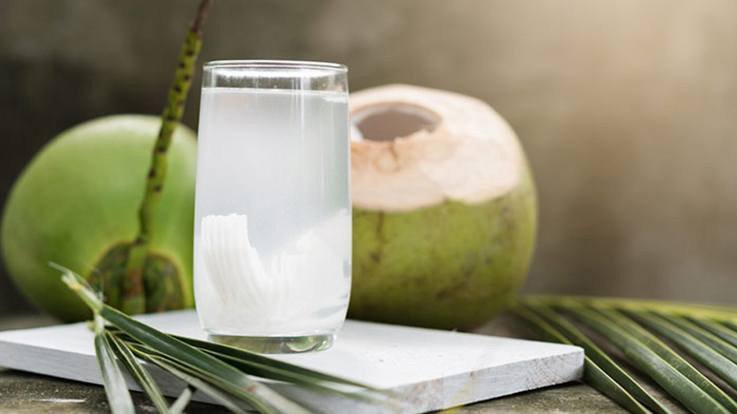 Coconut water has long been a popular refreshing drink in the tropical countries.

Coconut water is the clear liquid inside young green coconuts (fruits of the coconut palm). Fresh coconuts are typically harvested from the tree while they are green. A hole may be bored into the coconut to provide access to the liquid and meat.

They are often sold by street vendors who cut them open with machetes or similar implements in front of customers.

In recent years, coconut water has been marketed as a natural energy or sports drink having low levels of fat, carbohydrates, and calories, and significant electrolyte content. However this is disallowed by certain regulatory agencies. 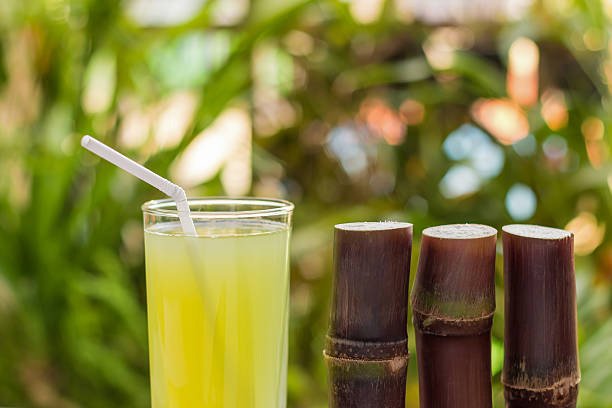 Sugarcane juice is the juice extracted from pressed sugarcane. It is obtained by crushing peeled sugar cane in a mill.

It can be a hand-cranked machine, or powered. It is served, often cold, and sometimes with other ingredients, such as a squeeze of lemon, black salt or mint.

The juice is very healthy and tasty but you have to be very careful about hygienic conditions. 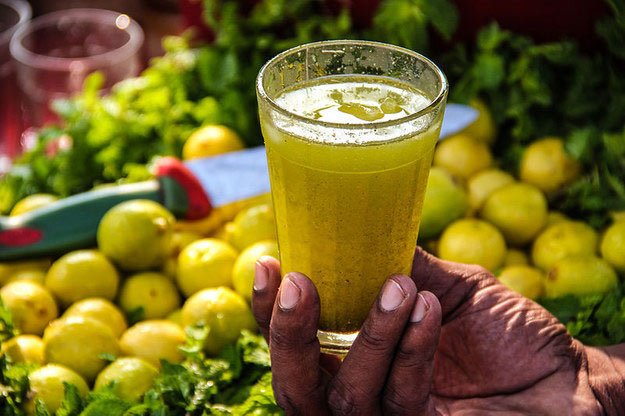 Shikanjvi or Nimbu Pani is a type of traditional lemonade from North India.

While the base ingredients include lemon or lime juice and sugar, shikanjvi often contains other ingredients such as chaat masala, salt, saffron and cumin.

VOUS AIMEREZ PEUT-ETRE AUSSI...
Main Courses
In India the main dish is usually a vegetable, meat, or pulse curry with rice and/or some form of bread. Rice is t...
Indian Spices
Indian food without herbs and spices is unimaginable. They are at the heart of every dish. They have been used sinc...
Indian Breads
Most Indian breads are flatbreads, made without leavening and cooked on a flat or concave pan called a tava or frie...
Side Dishes and Condiments
Sambar Sambar is a lentil-based vegetable stew or chowder based on a broth made with tamarind and other spices...
Onam, the return to Earth of the king Mahabali
Onam is Kerala's biggest festival. It falls in the Hindu month of Chingam (August-September) and marks the return ...
Indian Snacks
Indians love snacking and there are snack stalls on every street corner. Here are a few examples of the infinite va...
← Indian Desserts
World Sacred Spirit Festival, Nagaur, Jodhpur →

12 Comments on “The most famous Indian Beverages”