Although few foreign tourists come here, this peaceful village on the banks of the River Pampa is an important place of pilgrimage for Hindus and is famous for its Krishna temple and the “snake-boat” race held every year during the Onam festival. Aranmula also has another unique claim to fame: sacred mirrors called kannadi are made there using a centuries-old technique whose secret is closely guarded.

The Parthasarathy temple, built in typical Keralan pagoda style, is one of the 108 revered Vishnuite divya desam temples and also one of Kerala’s Pancha Pandava temples. According to Hindu legend, these temples were each built by one of the five Pandava brothers. 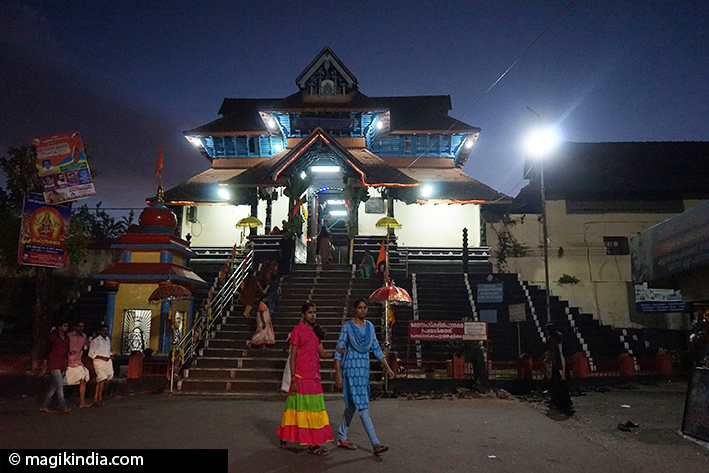 The legend goes that after King Parikshit was crowned the Pandava brothers set off on a pilgrimage. They visited Kerala and each built a temple there. Yudishthira built one at Thrichittatt, Bhima at Puliyur, Arjuna at Aranmula, Nakula at Thiruvanvandoor and Sahadeva at Thrikodithanam.

It is said that Arjuna built the Parthasarathy temple at Nilakkal near Sabarimala, to atone for a sin. But Nilakkal was in dense forest, making it difficult to perform daily rituals there. The idol was therefore brought to Aranmula on a raft made of six bamboo poles – whence the name Aranmula, which means “six bamboo stems”. 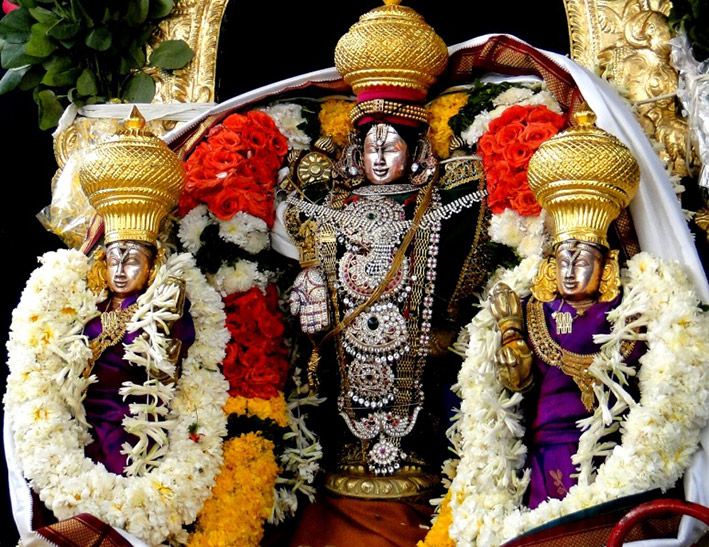 Several “snake boats” or chundan vallams accompanied the procession across the River Pampa. The idol was installed in the temple on the day of Uthrattathi in the month of Chingam (August-September) according to the Malayalam calendar, Uthrattathi being Arjuna’s birthday. The village of Aranmula celebrates this event each year with a snake-boat regatta during the Onam festival.

The main idol in the temple is a statue of Lord Krishna as Parthasarathy, i.e. in his role as the charioteer who drove Arjuna into battle in the Kurukshetra war, as described in the Mahabharata epic.

The Aranmula Uthrattathi Vallamkali or snake-boat race is one of the year’s biggest festivities in the village of Aranmula and one of the oldest traditional races in Kerala. 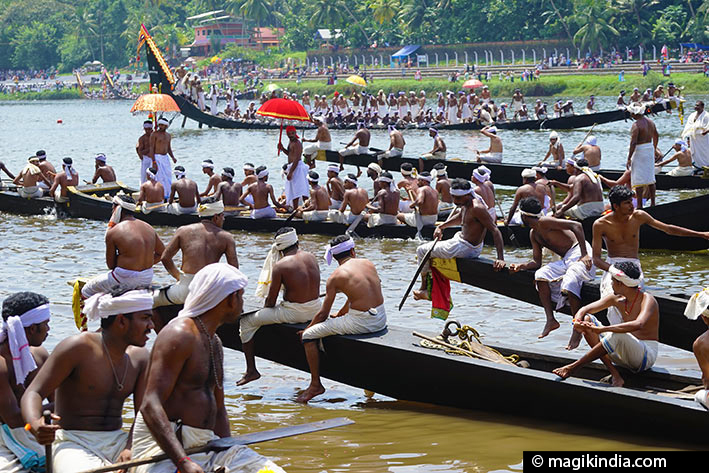 The snake boat of Aranmula

It is linked to the Parthasarathy temple and takes place every year on Uthrattathy day in the month of Chingam in the Malayalam calendar (August-September), four days after Thiruvonam (the Onam festival). 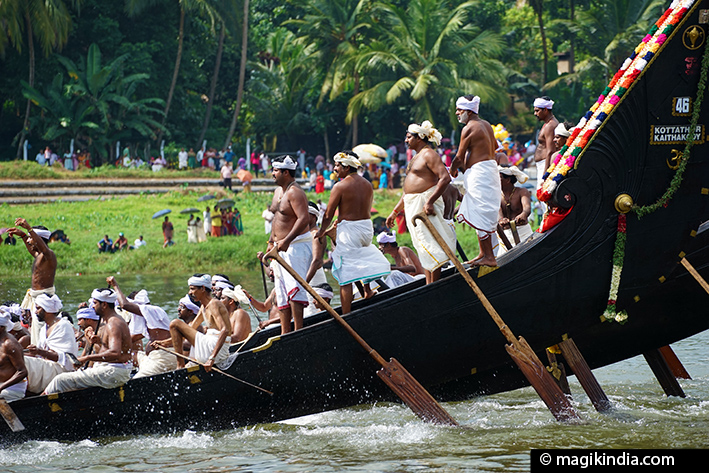 The snake boat race of Aranmula

People of all social classes and religions living in and around Aranmula get involved in the Vallamkali. It is organised by the Seva Sangam Palliyoda, an organisation made up of two members from each of the 48 villages or karas that possess a snake-boat.

=> READ MORE ABOUT THE SNAKE-BOAT RACE ! 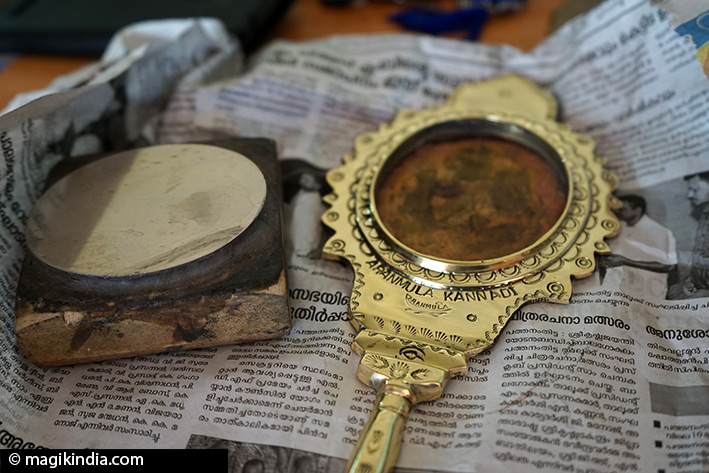 The precious and mysterious kannadis of Aranmula are metal mirrors of a unique kind. They are made only in this village and are exported throughout the world.

The story goes that a few generations ago, eight families from Tirunelveli who specialised in temple art came to Aranmula at King Pandalam’s command to work on the building of the Parthasarathy Temple.

While working on the temple idol’s bronze crown the craftsmen discovered the exceptional reflective qualities of a particular alloy of tin and copper. But they were unable to reproduce the alloy until Parvathi Amma, a widow in their community, received the exact composition of the alloy in a dream. That composition is kept secret to this day by the few artisan families still transmitting the craft from generation to generation. 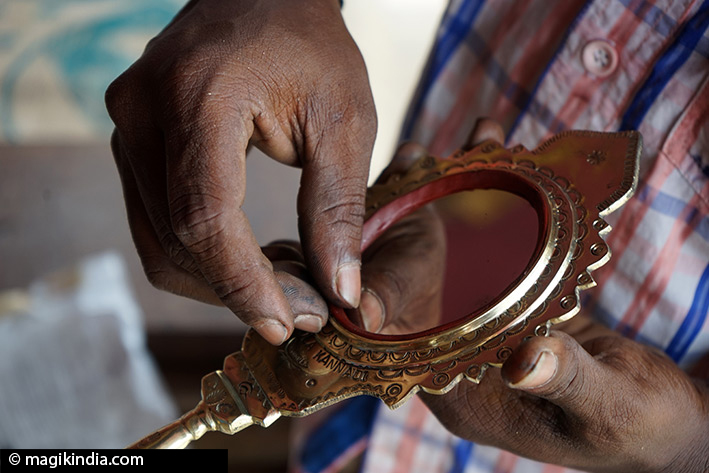 Most mirrors consist of a sheet of glass with a silver or aluminium backing which reflects objects through the glass. 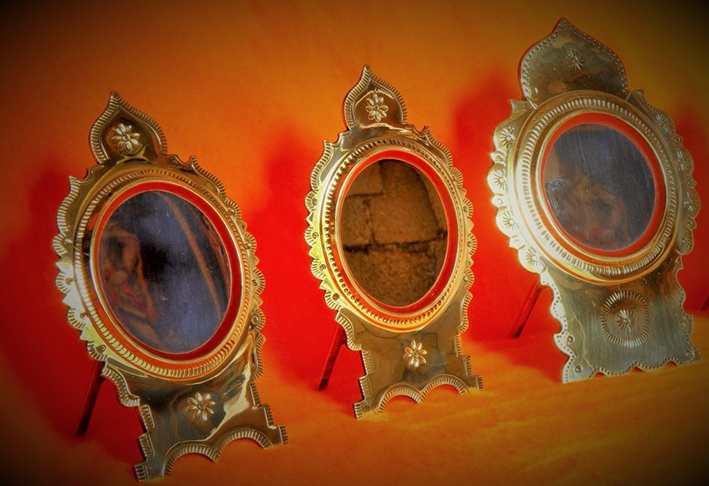 The kannadi of Aranmula have a distinct old-world charm. They are generally round or oval hand mirrors set in brass frames. These are stamped, as the mirrors are protected by an official Geographical Indication. They count among the eight auspicious objects or ashtamangalyam in a Kerala bride’s trousseau.

VOUS AIMEREZ PEUT-ETRE AUSSI...
Indian Spices
Indian food without herbs and spices is unimaginable. They are at the heart of every dish. They have been used sinc...
Wayanad, the green paradise of Kerala
This 20,000-hectare green forest paradise at the southern tip of the Deccan plateau, in Kerala, is home to one of ...
The best places to visit 100km around Jaipur
If you want to extend your trip to the region of Jaipur (Rajasthan) and if you are looking for places to visit wit...
Shekhawati, Rajasthan's open-air art gallery
Organised tours often bypass the Shekhawati region in northwest Rajasthan, yet in the 18th and 19th centuries it w...
Alappuzha (Alleppey) and its romantic backwaters
Tucked between the Laccadive Sea and a network of interconnected rivers and lagoons, Alappuzha (Alleppey) offers a...
Jodhpur, the blue city of Rajasthan
Overlooked by its imposing fort (called "the magnificent"), the blue city makes the most of its heritage with a nu...
← Udupi, a Mukti Kshetra pilgrimage site
Tirupati, the abode of Lord Vishnu on earth →