Chandigarh is the first new city of independent India, both an Indian territory and the common capital of Haryana and Punjab. Its history is closely linked to the partition of India of 1947 when the Punjab split in two between India and Pakistan needed a new capital. Chandigarh has been made world famous for its urbanism planned by the French-Swiss architect Le Corbusier.

Chandigarh was created following the partition of India in 1947 to replace Lahore that was now located in Pakistan. Shimla, the current capital of Himachal Pradesh, assumed this function from 1947 to 1953 and then Prime Minister Jawaharlal Nehru decided to build a new capital for the Punjab: Chandigarh (“the Chandi Fort”), which derives its name from the Hindu goddess Chandi whose temple is near the city.

In 1966, the state of Haryana was detached from Punjab. Chandigarh, located on the border of the two states, became a territory, capital of both Punjab and Haryana.

This place both eccentric and genial was imagined by Nek Chand, a a government official who used his spare time to create a garden dotted with elegant sculptures and structures entirely made of recycled materials (glass, ceramics, pipes, etc.). .

Nek Chand had no building permit, he thus worked at night and managed to hide his work during 18 years. When his masterpiece of 10 ha was finally discovered by the authorities, it was about to be destroyed but Nek Chand finally rallied public opinion on his side and in 1976, the park was inaugurated and opened to the public.

The Capitol Complex is a set of administrative buildings listed as World Heritage by Unesco and designed by Le Corbusier. They include the High Court of Justice, the Secretariat and the Vidhan Sabha (the Legislative Assembly) and reflect Le Corbusier’s brutalist style manifested by the absence of ornaments, the repetition of windows and the rawness of the concrete (hence ‘brutalism’).

This complex housing government buildings, the visit is necessarily guided; you must register for this at the High Court Tourist Office.

Within the complex, there is also the Open Hand, a symbolic sculpture designed by Le Corbusier. It is the emblem of the Chandigarh Government and symbolizes peace and reconciliation, the hand that gives and receives.

Several museums are worth a look:

The Government Museum & Art Gallery has a fine collection of sculptures from ancient India and Pahari and Rajasthani miniature paintings.

The ‘Chandigarh Architecture Museum’ was designed by the architect S.D. Sharma, trained by Le Corbusier and Jeanneret. The museum presents the original correspondence between the administrators and architects who planned the city of Chandigarh as well as original drawings and plans.

The Natural History Museum includes various sections including dinosaurs and ancient manuscripts. The exhibits in this museum cover 5,000 years of Indian history, from the Indus valley civilization to the present day. 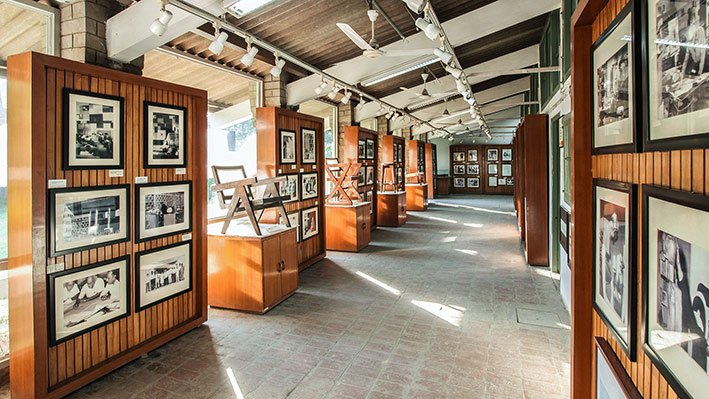 If you are interested in architecture, Le Corbusier Center exhibits, with photos and writings, the projects and achievements of the new city planned by Le Corbusier.

This artificial lake of 3 km² was designed by Le Corbusier and Verma at the foot of the Shivalik Hills. It offers little tourist attraction, it is mainly a place for picnics and leisure activities for Indian families.

If you want to give yourself a spiritual break, the Mansa Devi temple is definitely worth a visit. It is dedicated to the Shakti in the form of three goddesses: Mansa Devi, Maya Devi and Chandi Devi. The atmosphere is very pious and the building has beautiful frescoes on Hindu mythology.

VOUS AIMEREZ PEUT-ETRE AUSSI...
Bodhgaya, the land of Buddha’s Enlightenment
At the age of 29, Siddharta Gautama, Prince of Kapilavastu, abandoned his material and worldly life to find the tr...
Udaipur, the romantic city of lakes
Udaipur, city of lakes, an oasis in the arid wastes of Rajasthan, a sweet dream where majestic palaces are reflect...
Baneshwar fair, the Kumbh Mela of Bhils
Baneshwar Fair is a huge folk fair held in Dungarpur district in Rajasthan. The 5-day event, which is sometimes ca...
Les plus beaux palais de l'Inde
L'Inde, du fait de sa culture millénaire, possède un patrimoine d'une richesse inégalée ; les palais font partie d...
The most popular religious festivals of India
India is a pious country and religion plays an important part in the lives of most Indians. Ritual and worship are...
Saputara, the monsoon hills of Gujarat
Saputara 'the abode of snakes' in the local language is a charming hill resort of Gujarat perched at 1000m altitud...
← Chittorgarh, city of courage and devotion
The most popular religious festivals of India →

2 Comments on “Chandigarh, a Le Corbusier city in India”