Sanjhi, the art of stencil in India

The Sanjhi is an ancient art of religious origin, which consists of creating drawings on the ground or on water using finely cut stencils that are filled with colored powders. Traditionally, this art depicts the mythological legends of India and especially those of Lord Krishna. The Sanjhi, which has gradually fallen into disuse, has nevertheless evolved into contemporary forms of great creativity that are exhibited in the best art galleries in India.

The origins of Sanjhi

‘Sanjhi’ derived from the word ‘sajja’ meaning ‘decoration’ or ‘sanjh’, ‘dusk’, referring to the time of day during which the Sanjhi drawings were revealed to the public. 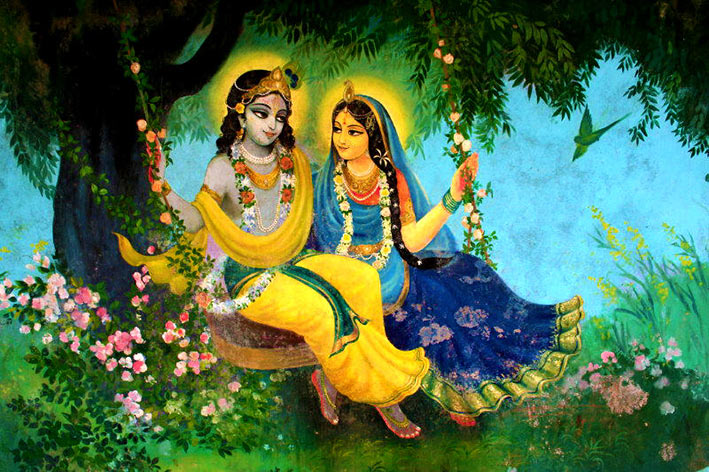 It is said that the Sanjhi art appeared 400 years ago in Mathura, the birthplace of Lord Krishna. This art was used as an element of decoration in the temples of Mathura and Vrindavan dedicated to RadhaKrishna during special festivities like Holi (the festival of colors) and Janmashtami (birth of Krishna). 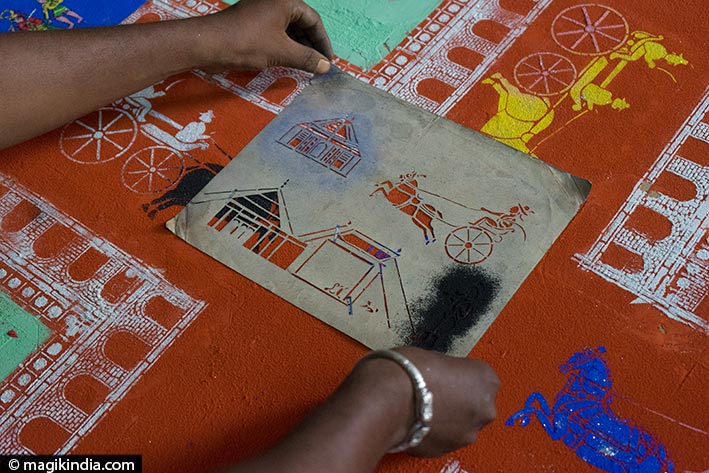 Sanjhi on a wooden base in the Radha Wallabh Ji temple

The creation of the religious Sanjhi is not merely a recreational drawing but is part of the ‘Radha Krishna Bhakti’, ie the expression of love and devotion for Lord Krishna and Radha, and for the divine in general. The process of the making of the drawing is a form of meditation in itself offering a real moment of introspection; The Sanjhi looks very much like Buddhist mandalas.

For many centuries, this particular art has persisted within the community of Vaishnava priests in Mathura and Vrindavan, and it has slowly been forgotten. Luckily, some temples, in Vrindavan, Mathura and also in Rajasthan (see below), still continue to perpetuate this unique art. 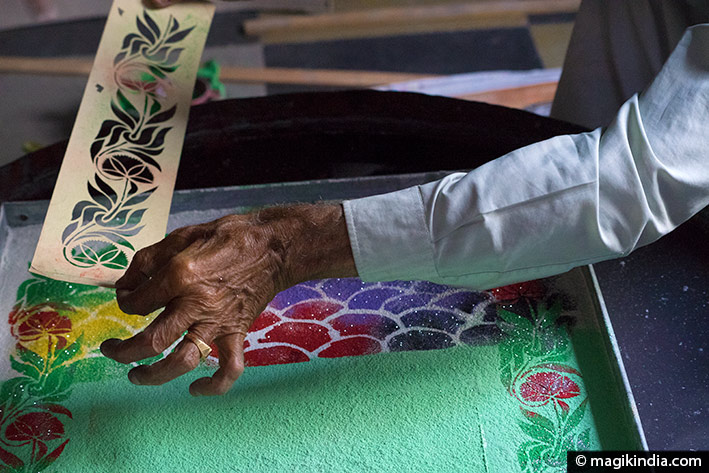 The making of a stencil drawing in Radha Wallabh Ji temple 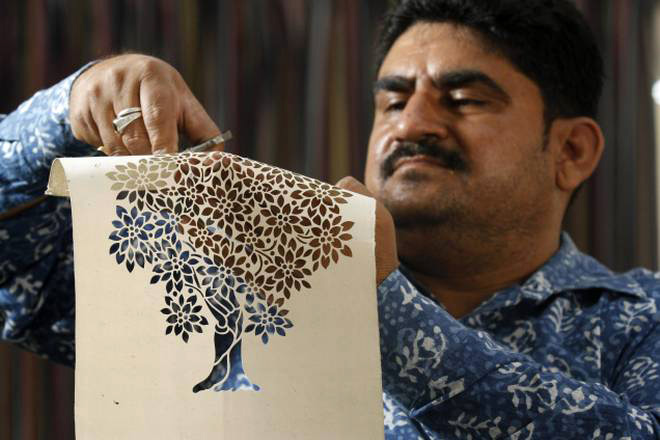 The stencils called ‘khakha’ are carefully cut with small special scissors. The process requires a lot of skill and patience. The resulting stencils most often reflect the leelas (divine games) of the dark-faced god, Krishna. 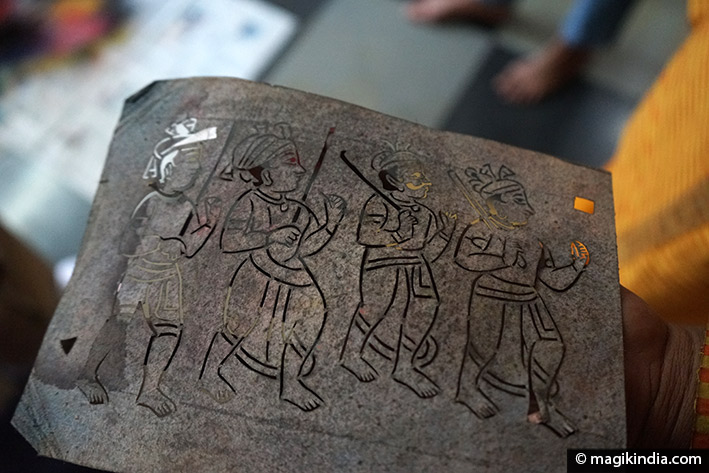 An old stencil of the Radha Wallabh Ji temple in Udaipur

The most elaborate Sanjhi drawings are created with stencils that are superimposed on each other and filled with powders of different colors until the final pattern appears. The final image then presents a more complex design and depth (see above).

This art is now revisited by different artists such as Mohan Kumar Verma from Mathura and Ram Soni, and their works of art are exhibited in many art galleries all over India. 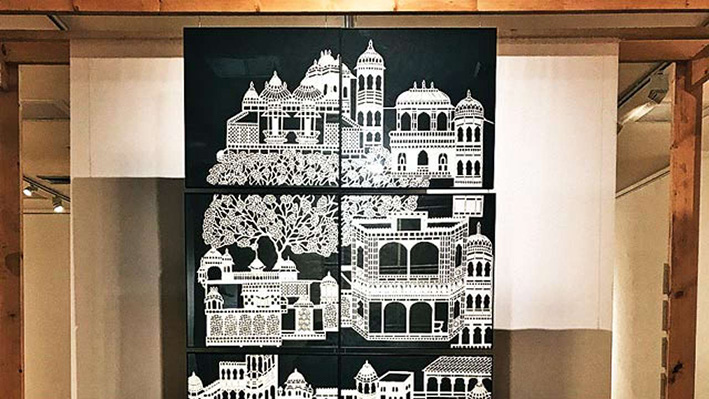 As we have seen above, the art of religious Sanjhi is becoming more and more rare in India, but fortunately it is still perpetuated in a few places like the Radha Wallabh Ji temple located in Udaipur, Rajasthan. The Pancholi brahmin family tries to keep this art alive and their specialty is the ‘Jal Sanjhi’, the art of Sanjhi on the water!

Pancholi family, heirs of the Sanjhi art in Udaipur 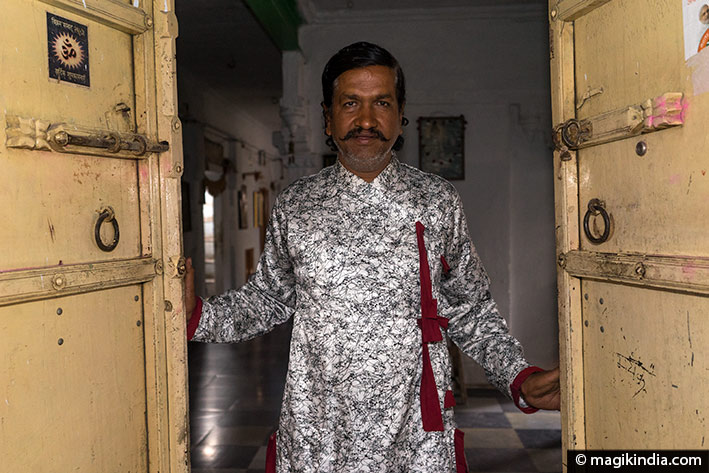 Rajesh Pancholi, one of the priest of the Radha Wallabh Ji temple

The art of Sanjhi was introduced in the Radha Wallabh Ji Temple by M. Madhav Lal Pancholi around 60 years ago. He created the paper stencils still used today in the temple. His sons Rajesh Pancholi and Narayan Pancholi then took over followed by his grandsons Gunjan Pancholi and Parag Pancholi.

The Sanjhi drawings of this temple are performed 5 days annually during the 16-day period of Pitru Paksha (September-October) during which Hindus pay tribute to their ancestors, mainly in the form of food (shradh). As a sign of respect to their elders, all other festivities are prohibited during this period.

In the evening, the public comes to admire this unique art while the sound of Bhajans (devotional songs) resonates in the temple. 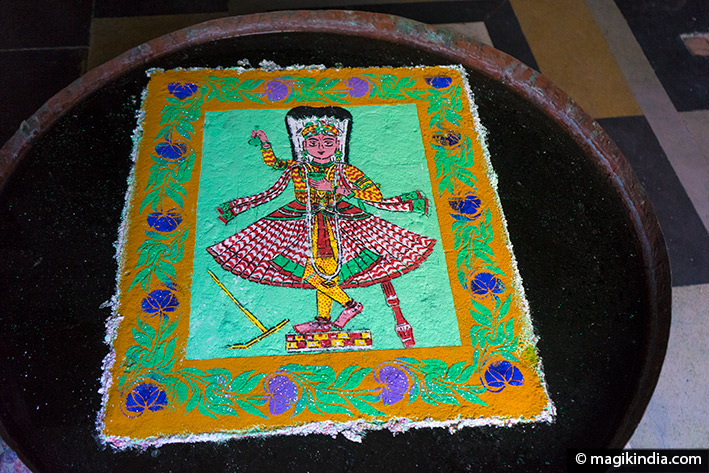 A Sanjhi on water

Different designs covering the life of Lord Krishna such as Govardhan leela or Naag leela are created on small basins filled with clear water.

To obtain the final pattern, a large number of stencils are required which, placed on top of each other, give the desired result.

[ WATCH ! My video of Sanjhi making ]

This meticulous process can last up to 4 hours. A few hours later, the colors begin to dissolve in the water, symbol par excellence of the impermanence of life …

The temple offers Sanjhi workshops, contact me if you wish to participate.

VOUS AIMEREZ PEUT-ETRE AUSSI...
Siddhpur, a Matru-Shradh place in Gujarat
Siddhpur "the pious" is a surprising town, on the banks of the Saraswati river. Its sacred atmosphere is rather re...
Rakhi, Raksha Bandhan, the brother-sister bond
Raksha Bandhan or Rakhi is a Hindu festival that takes place every year in August, mainly in the North of India, an...
Baneshwar fair, the Kumbh Mela of Bhils
Baneshwar Fair is a huge folk fair held in Dungarpur district in Rajasthan. The 5-day event, which is sometimes ca...
Konark, the magnificent sun temple of Odisha
Konark and its Sun Temple – another of those wonders that only India can produce! This architectural exploit is an...
Aranmula and the fascinating Vallamkali Snake-Boat Race
If there is one imperishable memory to be brought back from a trip to Kerala it is the fascinating Aranmula regatt...
Radhakrishna, the symbol of divine love
Radhakrishna represents the unique union of the Goddess-gopi Radha and her beloved Krishna, two highly revered dei...
← Agra, town of the Legendary Taj Mahal
Kinnaur Valley, a hidden gem in Himachal Pradesh →

2 Comments on “Sanjhi, the art of stencil in India”