Thanjavur (Tanjore), once the capital of the Chola empire, is an important centre of South Indian culture ; The Tanjore style of painting originated here. The town boasts a Unesco-listed world heritage monument, a marvel of Dravidian architecture: Brihadeeswarar temple.

The Brihadeeswarar temple is dedicated to Shiva. It is one of India’s largest temples and was built by order of Raja Chola I in the 11th century CE. The architecture is impressively rich.

At the entrance to the temple stands a colossal statue of the holy bull Nandi, Shiva’s mount. It is 4m high by 6m long and weighs 25 tons. The inner sanctum houses a huge Shivalingam nearly 4m tall, which makes it one of the biggest in India. The temple tower or vimanan is 66m high. The bulbous top of the vimanan has been carved from a single block and is estimated to weigh about 80 tons.

Near the Nandi statue is a fine 13th-century shrine to Amman.

In the days of the Chola empire, nearly 1000 people worked in the temple including 400 dancers of both sexes, so it is no surprise to learn that the temple made a major contribution to the local economy.

The Tanjore painting style is a classical style of Indian painting that began in the town of Thanjavur.

It emerged around 1600CE in the time of the Nayak dynasty. Tanjore paintings are essentially religious; most represent Hindu gods or goddesses, Krishna especially, or Hindu saints.

To produce a Tanjore painting, a long sequence of steps must be scrupulously followed.

It is usually done on a panel of wood commonly called palagia padam (palagia means wooden board, padam means photo).

The first step is to stretch and glue a piece of fabric over the wood panel. Next, a mixture of powdered chalk and water-soluble glue is applied to the fabric.

This paste provides a ground and is used to create relief shapes that give the picture depth. Precious gems are inlaid in areas of the picture like clothing, jewellery and architectural elements. Lace, wire and gold leaf are also used. Coloured paints are applied to clothes and background; the faces are painted last of all. 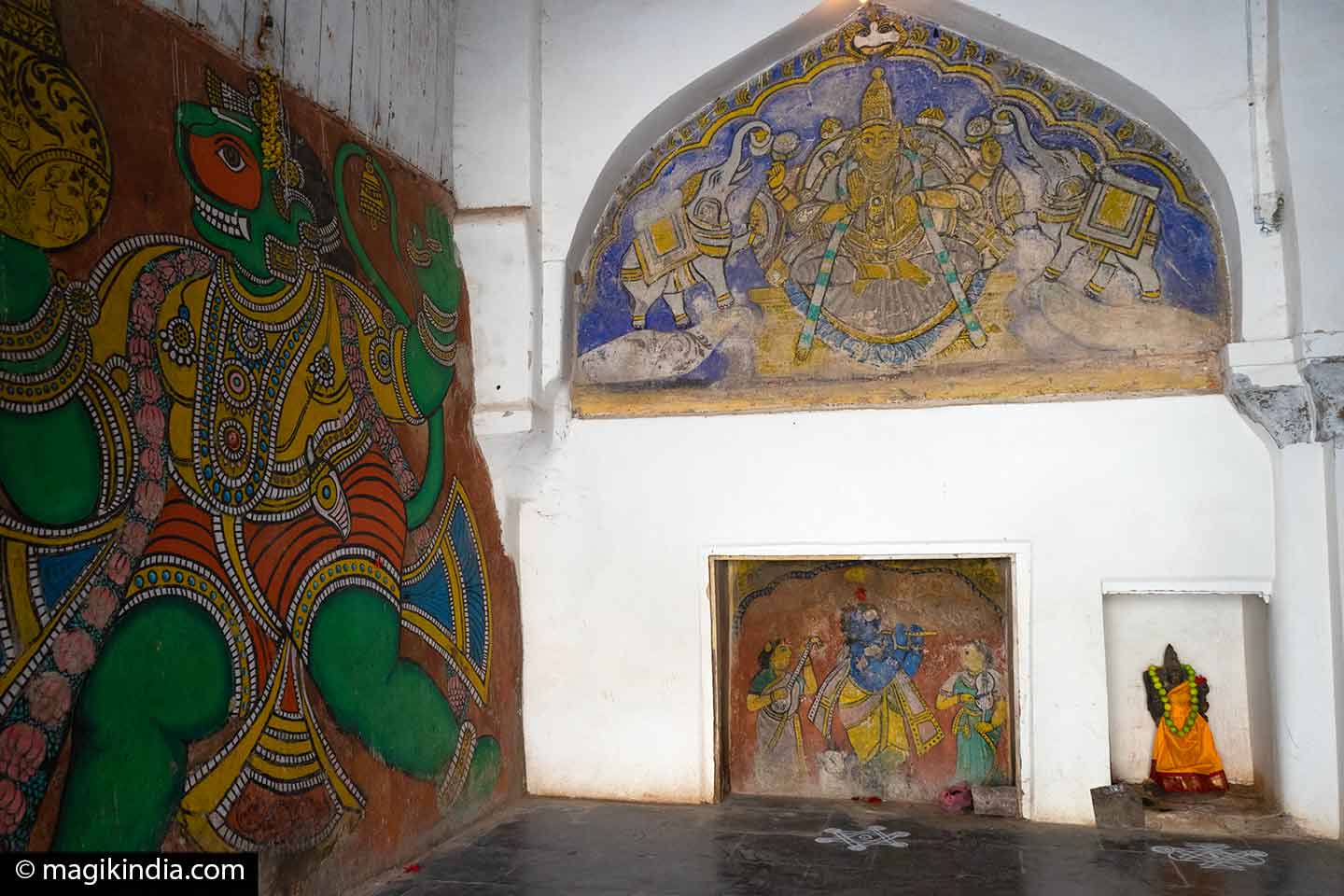 Many visitors forget to visit the Thanjavur palace, it is nevertheless a visit that is really worth the trip, for its historical side of course, but also for its art gallery and its magnificent audience hall.

Thanjavur Palace was the residence of the Nayak kings. Built in the 16th century, it became in the 17th century the seat of the Marathas sovereigns and therefore it is often called ‘Maratha Palace’. The palace is actually a complex that consists of several parts:

The Durbar Hall also called Lakshmivilasam is surely the most spectacular building in the complex. It was once used as a courtroom by the Marathi kings. This hall is covered with shimmering murals and stucco images from the Maratha era. The colourful octagonal columns, the magnificent arcades and the walls of the hall are adorned with deities. 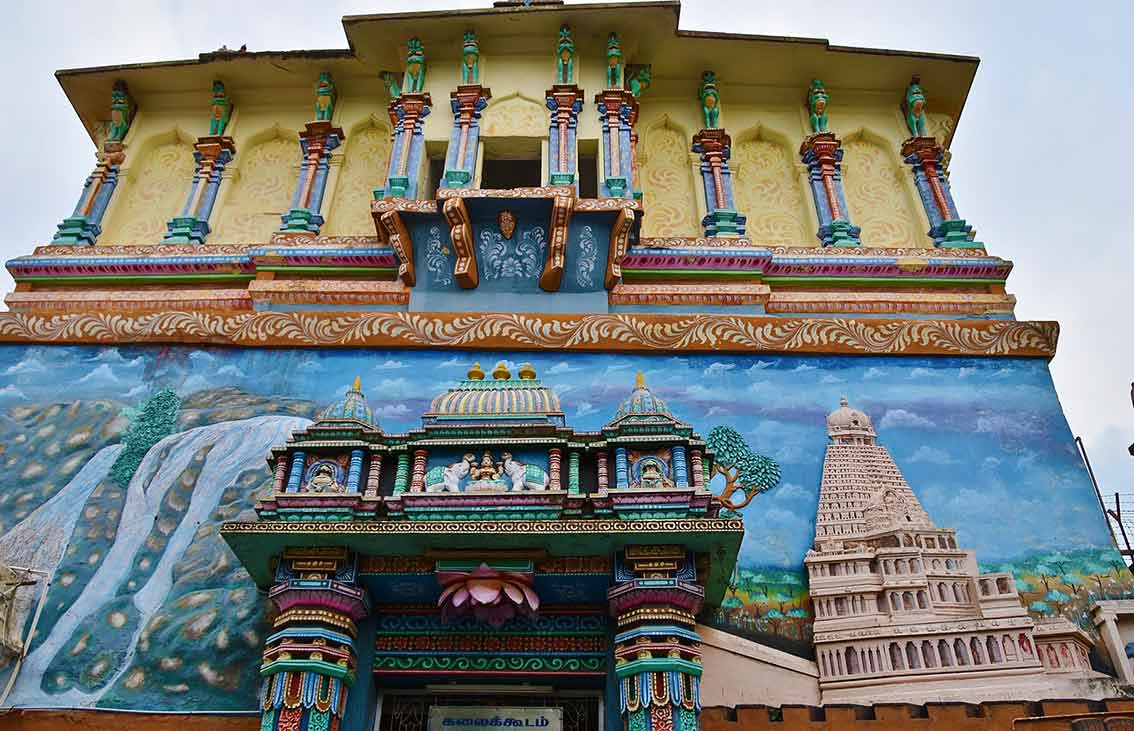 The other amazing place in the palace complex is its Raja Raja Chola art gallery which contains magnificent bronzes and stone statues from the Chola era. 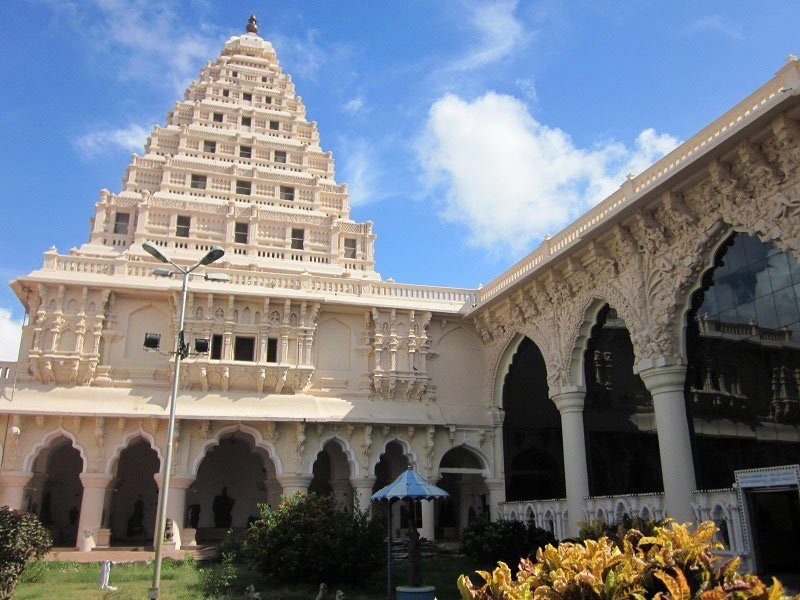 The 60 m high arsenal tower is also called Indhira Mandhiram. It was the room of the Nayak kings and they used to stay in one of the seven floors of the tower. During the period of the Marathas kings, it was used to store weapons and ammunition and also serve as a watchtower. 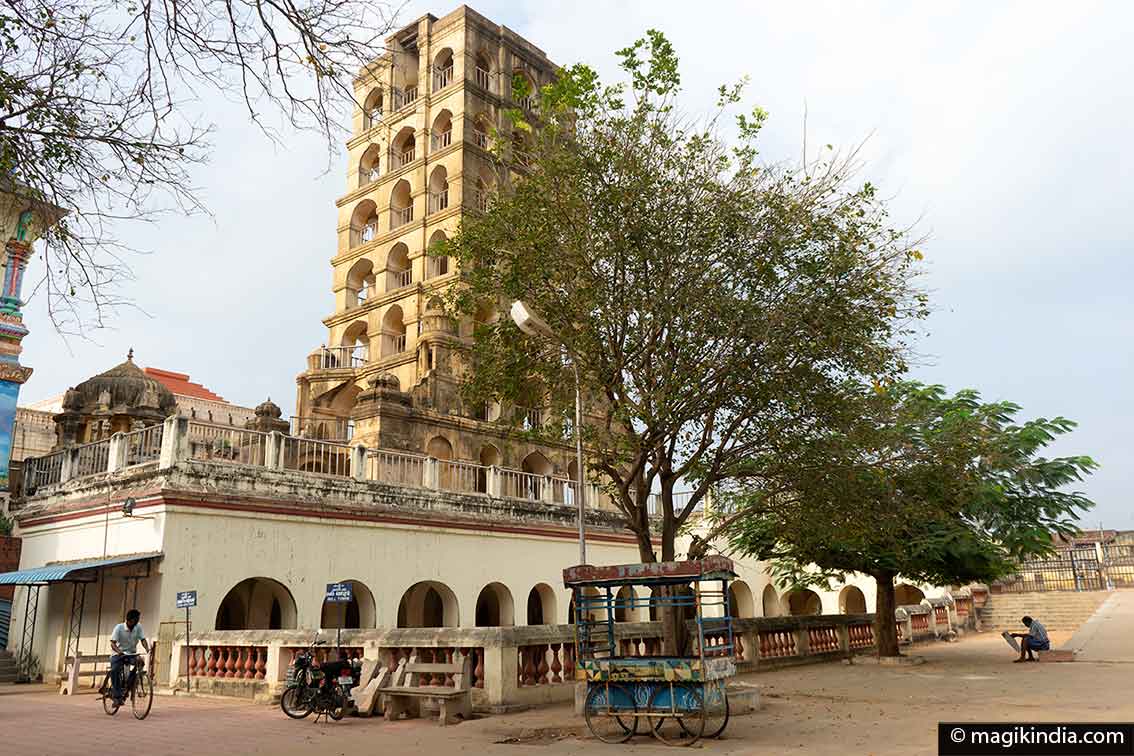 This tower is located to the northwest of the arsenal tower. Originally, it was used as a bell tower, to announce the time by blowing in conch shells. At the foot of the bell tower, a sculpture of Rajagopalaswamy was installed by the Nayak kings and the place was also used for discussions with poets and intellectuals. 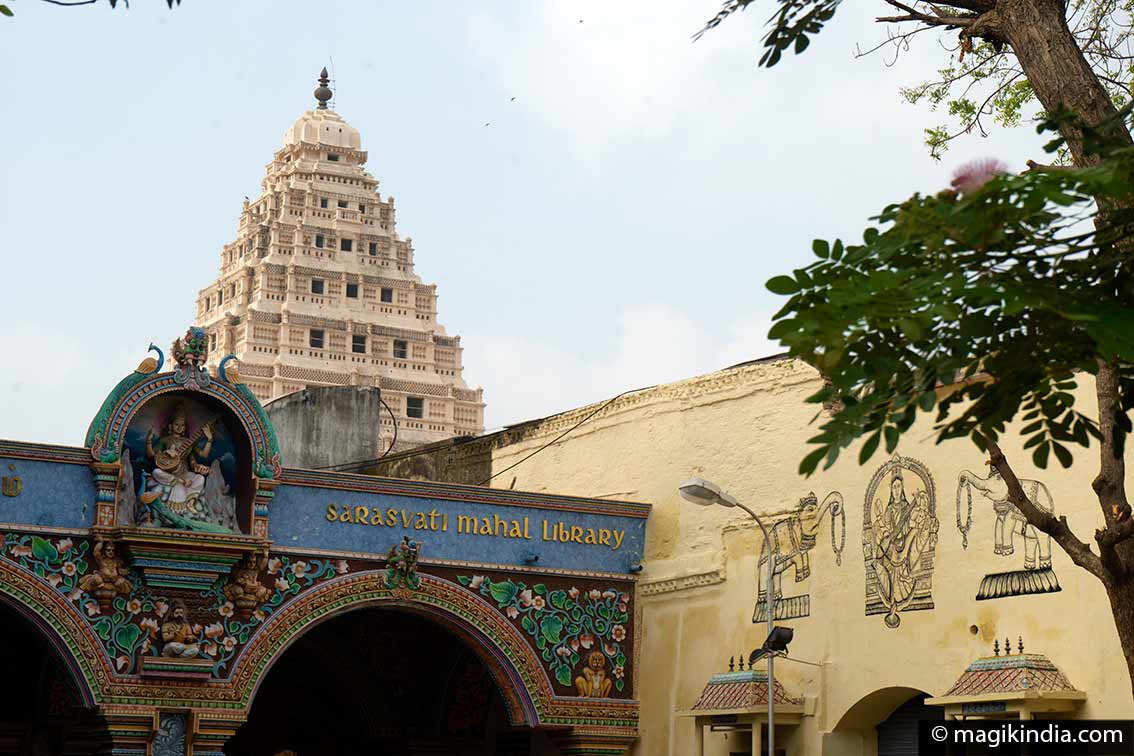 ‘Serfoji Saraswati Mahal’ library which exhibits among other things a rare collection of palm leaf and paper manuscripts written in Tamil, Hindi, Telugu, Marathi, English and other indigenous languages of India. 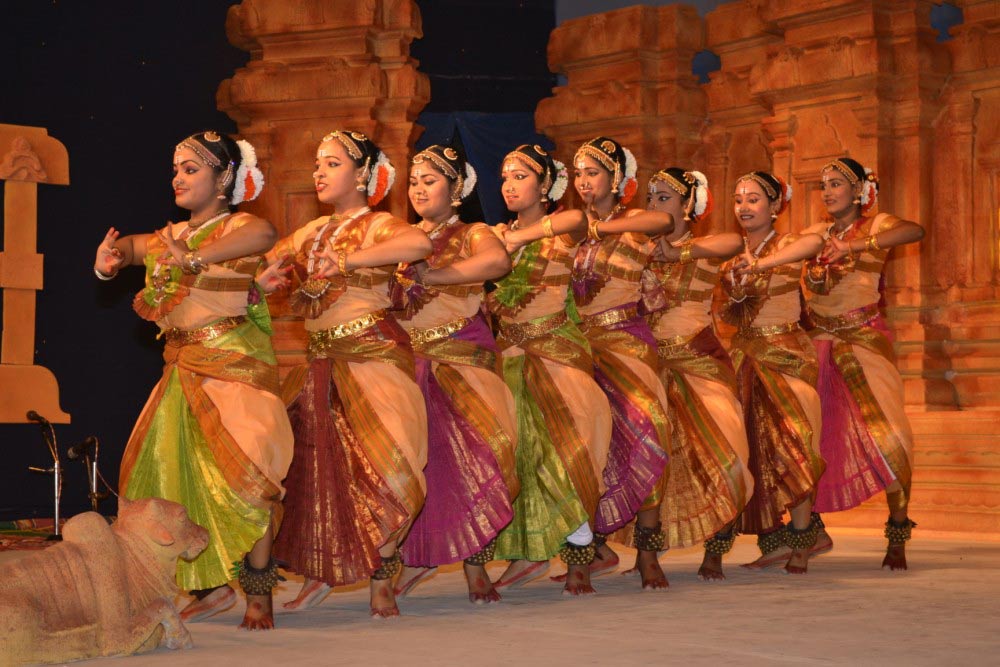 VOUS AIMEREZ PEUT-ETRE AUSSI...
Rameshwaram, the legendary island of Tamil Nadu
An island surrounded by crystal waters and edged with delightful fishing villages, and a temple with endless pilla...
Durga-Puja, the divine festival of Kolkata
In West Bengal and its capital Kolkata, the great festival of Navaratri celebrating the Divine Mother is called Du...
Khonoma, the green village of Nagaland
Khonoma … I had planned to stay there for only one day, I almost settled there! This ancient village has a real en...
The most popular religious festivals of India
India is a pious country and religion plays an important part in the lives of most Indians. Ritual and worship are...
12 good reasons to visit India
India still suffers from a bad reputation. Archaic, poor, dirty... Gandhi's country is fortunately not limited to ...
Thirukokarnam, abode of the goddess Praghathambal
Thirukokarnam temple, 5km from Pudukkottai, is dedicated to the Hindu goddess Praghathambal or Araikasu Amman and ...
← Courtallam (Kutralam), the Spa of South India
Chettinad, the forgotten splendour of Tamil Nadu →

2 Comments on “Thanjavur (Tanjore), capital of the Chola Empire”