Varanasi, the spiritual capital of India

They say that Brahma the creator god once declared, “I had to create the world several times but Varanasi is different. It was created by Shiva in person”. Varanasi, Benares, Kashi, city of light, is a town to be lived in and felt rather than visited. The city of Shiva speaks to the soul.

Varanasi, on the left bank of the Ganges, is one of the Sapta Puri, the seven most ancient and holy cities of India. It is considered the country’s spiritual capital.

Its historic and religious heritage goes back a very long way. In the 6th century BCE when the Buddha gave his first discourse at Sarnath, a few miles away, Kashi was already the centre of Brahmanic learning. It has been an important cultural, literary and artistic hub and is still a thriving centre for Hindustani classical music.

There are said to be more than 20,000 temples in Kashi. One of them houses one of the 12 Jyotir Lingams. However, much of the town was plundered and destroyed by Mohammed Ghauri in the 12th century and most of the existing temples are no older than the 18th century.

Varanasi also famous for its Ghats (flight of steps). Hindus perform their ritual ablutions at the ghats and make offerings there (see below).sv

An absolute must-see! Dev Diwali, “the Diwali of the gods”, is celebrated on the day of the full moon, 15 days after Diwali. For this festival thousands of deepam (oil lamps) deck the ghats of Varanasi in honour of Ganga, goddess of the river. Legend has it that on this day the gods come down to earth to bathe in the Ganges… MORE +

Ganga Mahotsav is celebrated just before Dev Diwali. At this occasion, the holy city celebrates the Ganga river by performing Indian classical style music and dance. It provides an immense chance for tourists to see the real presentation of the Indian classical dance and music.

Nag Nathaiya festival is a part of the Krishna Leela ceremony, a mythological tradition involving depiction of a famous episode in the life of lord Krishna. The Nag Nathaiya festival of Varanasi is held at the Tulsi Ghat. The festival celebrates Krishna’s conquest of the serpent Kaliyah and it is held between November and December.

Dhrupad Mela is a five-day long musical festival devoted to Dhrupad style and organized at Tulsi Ghat in the month of February or March. During these five days renowned artists from all over the country come to perform Dhrupad. Dhrupad singing is actually rare because it has remained unchanged since the Vedic times, when it used to be the accompanying music to the chanting of Vedic hymns and mantras and was also sung at the royal courts of the Mughals. 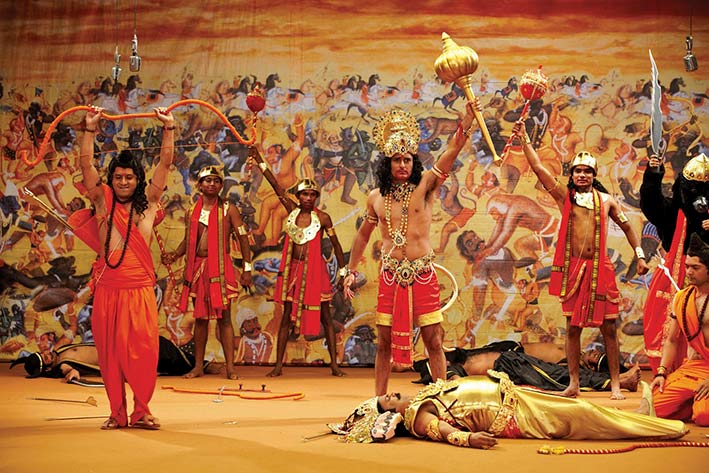 Ramlila is a dramatic presentation of the whole life of Lord Rama, which starts from the history of Rama of his young age and ends up with the battle for 10 days between the Lord Ram and Ravan. According to the great Hindu epic Ramayana, Ram Leela is an old religious and cultural tradition that plays on stage every year for the 10 successive nights. A big fair is held during this period so that everyone may enjoy fair and Ram Lila drama. The traditional staging of the Ramlila fair is held at the Ramnagar (fort of the Kashi Naresh, see below) located at the banks of river Ganges.

What I love best in Varanasi, and by far, is strolling through the galis, the lanes of the old quarter. Just getting lost there. Then drinking in the atmosphere of the Ghats, especially after dark when there is a special atmosphere.

There are 88 ghats in Varanasi, from ‘Assi Ghat’ to ‘Shri Panch Agni Akhara Ghat’. These are mostly ghats for ablutions and rituals, the others are private or they are cremation ghats (see below). Most of Varanasi’s ghats were built or rebuilt in 1700 AD, when the city was part of the Marathi Empire.

One of the most popular attractions in Varanasi is a boat trip on the Ganges, at the first rays of the sun, along the ghats. For photographers, this is the perfect time to capture the mystical beauty of the city.

Cremation is a rite of passage for Hindus and Varanasi is considered the holiest place in India to be cremated in. Hindus believe that those who die in Kashi obtain moksha, liberation from the cycle of birth and death (reincarnation). In Varanasi life and death coexist quite simply and naturally. It’s a real life lesson.

Each year around 30,000 bodies are cremated in Varanasi. This practice has become controversial regarding the pollution it causes to the river. Several actions are now underway to combat sources of pollution along the Ghats of Varanasi. However, it will take a while for Varanasi to become clean, these millennial practices and habits cannot be changed with a single click.

The Vishwanath temple with its golden dome is the beating heart of Varanasi. The name of Vishwanath or Vishweshwara, its main deity, means “ruler of the universe”. The temple boasts one of India’s12 Jyotir Lingams or ‘lingams or light’, The most revered Shiva temples in India.

The legend, from the Shiva Purana scriptures, tells that Shiva created a city and placed it on his trident. He declared that this city would be a place for austerities and that the faithful should go there to benefit from its spiritual aura. An earring fell from Shiva’s ear and fell on the spot where the Manikarnika Ghat is now. Shiva appeared at the spot in the form of Rudra and consecrated a Jyotir Lingam. He declared that this lingam was part of himself. He took the city down from his trident and placed it beside the Ganges

Inside the temple, as at all major pilgrimage sites in India, there is a dense jostling crowd and only by using your elbows will you get to see the lingam for a few seconds of darshan (i.e. the sight of a sacred object or person). But, as always, it’s worth it!

N.B.: If you are not Indian you cannot just walk into the sanctum here, you must first register at the police at the entrance of the temple and they may ask you why you want to see the lingam, if you are a believer, etc.

Annapurna temple in Vishwanath Gali, near Kashi Vishwanath temple, is a very important temple for Varanasi, Annapurna being the city’s supreme goddess. She symbolises prosperity and happiness. Anna is Sanskrit for “food” and purna is “full, complete”.

The Ganga Arti takes place at sunset each day on Dashashwamedh Ghat. It is performed by Brahmin priests in a highly choreographed form to the sound of mantras and bhajans (devotional songs).

In my opinion the arati (ritual of flames) to the Ganges river is a spectacle rather than an authentic ritual but it’s worth seeing at least once even so.

This superb little Nepali style temple is a curiosity for Varanasi and a lovely surprise when you come across it by Lalita Ghat.

Inside, there is a lingam called Pashupatinath Mahadev Shivalinga. The atmosphere is wonderfully peaceful.

The submerged temple of Scindia Ghat

The partially submerged temple dedicated to Lord Shiva is located on the Scindia ghat bordered by the Manikarnika ghat. It is believed that the temple gradually sank due to its excessive weight.

Kalbhairav is one of the incarnations of Lord Shiva, in wrathful form. It is said that no one can live in Kashi without his blessing. The atmosphere here is very special and the temple’s structure is interesting.

Sankatha, near Sindhia Ghat, is dedicated to the “goddess of remedies”, Sankatha Devi, whose commemoration is celebrated on the 8th day of Navaratri. She is said to bring prosperity and to maintain the body’s energy.

The inner courtyard of the temple has an impressive Banyan tree that grows on several small temples.

This 18th-century Durga temple, red all over, is also called the “monkey temple” owing to its large simian population.

According to legend, the Durga statue in this temple is not man-made but appeared spontaneously. Millions of pilgrims flock to this temple to pray during Navaratri, one of the biggest Hindu festivals.

Sankat Mochan Hanuman Temple is one of the holiest Hindu temples in Varanasi. It is near the Durga Monkey Temple and the New Vishwanath Temple and it houses an idol of the monkey god Hanuman.

Sankat mochan means “he who gives relief from troubles”. The existing structure was built in the early 1900s by Pandit Madan Mohan Malviya, founder of the Hindu University of Benares. But legend has it that it was originally founded by Tulsidas, author of the Ramcharitmanas, an epic poem based on the Ramayana and written in the Awadhi dialect of Uttar Pradesh (the original Ramayana was written in Sanskrit by Valmiki).

The new Vishwanath temple is inside Benares Hindu University (BHU).

It is also called Birla temple after the famous family of Indian industrialists who built it.

This temple was built in 1964 by the Birla family of industrialists, on a site that is said to be where the 16th-century poet-saint Goswami Tulsidas wrote the Ramcharitmanas, a vernacular version of the Ramayana epic.

The imposing white marble temple is dedicated to the god Rama and contains some verses from the Ramcharitmanas.

The Bharat Mata temple stands in the Mahatma Gandhi Kashi Vidyapeeth campus. It is dedicated to Bharat Mata, the personification of India as a mother goddess; her representation in this temple is a huge marble relief map of the country. The temple, a gift from philanthropist Shiv Prasad Gupta, was opened by Mahatma Gandhi in 1936 as a cosmopolitan platform for people of all religions, races and castes.

Sarnath is a major place of pilgrimage for Buddhists. It is here that the Buddha delivered his first discourse.

The famous mantra Buddham saranam gacchami owes its origin to Sarnath. According to the sutras, on the eve of his death Buddha told his disciples that Sarnath along with Lumbini, Bodh Gaya and Kushinagar were the four places his devotees could “visit with feelings of reverence and awe”.

There are various Buddhist buildings at Sarnath. The most important are the Dhamekha Stupa, built in 500 CE in the place where the Buddha is supposed to have pronounced his first discourse after achieving enlightenment, and the Chaukhandi Stupa.

There are several monasteries at Sarnath, of various schools of Buddhism from Japan, China, Thailand, Myanmar and elsewhere. The Mahabodhi Society, an Indian Buddhist organisation, has built a temple in a huge park, where a relic, a tooth of the Buddha, is said to be kept.

This fort was the ancestral home of the Maharajas of Benares. Maharaja Balwant Singh built it in the18th century. It now houses a museum displaying the royal collection and several temples.

Vous aimerez aussi...
Baneshwar fair, the Kumbh Mela of Bhils
Baneshwar Fair is a huge folk fair held in Dungarpur district in Rajasthan. The 5-day event, which is sometimes ca...
World Sacred Spirit Festival, Nagaur, Jodhpur
Each February, the World Sacred Spirit Festival brings together eminent musicians from all over the world to explo...
Mahabalipuram, architectural masterpieces
The little spray-swept village of Mahabalipuram, 60km south of Chennai, is a delight, although very touristy. The ...
← Palani, the third ‘Aarupadai Veedu’
Udaipur Lake Festival →

2 Comments on “Varanasi, the spiritual capital of India”