Jyotir lingams, the 12 lingams of light

The lingam is the symbol of the Hindu god Shiva. There are numerous lingams throughout India, but the twelve Jyotir lingams or ‘lingams of light’ are the holiest and most worshipped of all. Jyoti means ‘light’ and lingam means ‘mark’ or ‘sign’. According to Hindu tradition, the Jyotir lingams pilgrimage washed off bad karma and makes the soul and body pure.

The legend of the Jyotir Lingams

The Siva Mahapurana, an ancient mythological and religious scripture, tells of a quarrel between Brahma the creator and Vishnu the preserver. Each claimed to be the Supreme Lord and a terrible battle ensued, plunging the universe in confusion and causing great distress to living creatures.

Neither could find what they were looking for. They came back exhausted and disoriented. At that moment, the central part of the pillar opened up and Shiva was revealed in all his glory. Brahma and Vishnu realised they were wrong and acknowledged Shiva as the Supreme Being.

The Jyotirlingams are located in places where Shiva appeared as a pillar of light. Each one bears the name of the deity that lives there; each of these deities represents a different aspect of Shiva and a different energy.

A distinction is made in India between two types of lingam: Manusi lingams are man-made lingams and Swayambhu lingams are ‘self-created’ or natural lingams, discovered in the places where they now stand. Most of these are oval-shaped stones. The twelve Jyotir lingams are all natural lingams. In most cases they have not been moved, a temple having been built around them where they were found.

These ‘lingams of light’ do not need a prana pratistha, the Hindu ceremony for consecrating an idol, because a Jyotir lingam already inherently embodies the power of Shiva.

The symbolism of the Jyotir Lingams

At the spiritual level, the twelve Jyotir lingams symbolise the state of enlightenment. Humans are completely absorbed by material life and worldly preoccupations; they do not know there are other states of consciousness and that they are capable of achieving them. The Jyotir lingams show us that there is a higher goal in life, beyond our earthly incarnation.

A Jyotir lingam represents Atman, the soul. Coming into contact with the light of the lingam awakens a person’s inner light, the light of Atman. 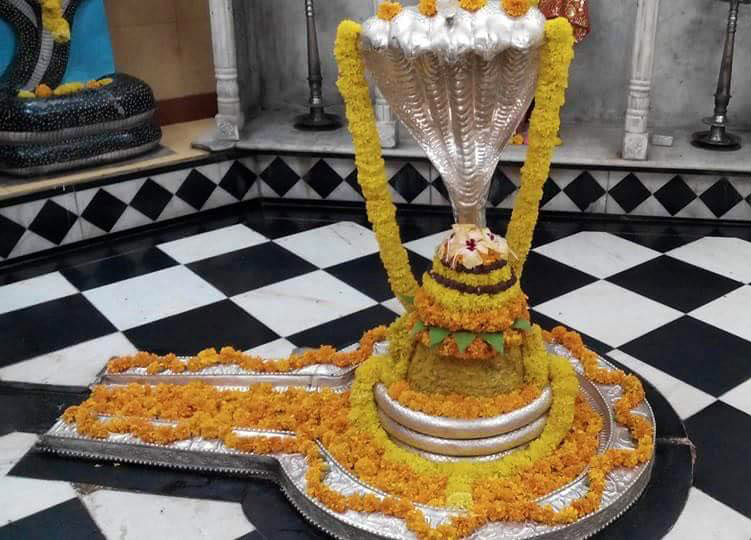 Yogis point of view: during the practice of yoga a transcendence of the body and the mind may happen. Then some inner experiences may occur. These experiments, according to some yogis often take the form of columns of light. Now these light columns are not necessarily the same for everyone. Sometimes, it can be seen as an oval shape, sometimes a round one, and sometimes as a pillar. This experience of enlightenment, which has been described by many different yogis, is what can be heard by Shiva. (source : yogamag.net)

1- Somnath, the Lord of the moon (Gujarat)

The temple at Somnath houses the “Lord of the moon”, foremost of the twelve Jyotir Lingams or “lingams of light”. Somnath lies on the Gujarat coast at Veraval and attracts millions of pilgrims every year…

The Jyotir Lingam Mallikarnuja is located on the hill of Sri Sailam in the city of Kurnool (Andhra Pradesh). This is one of the oldest and most sacred cities in South India, located on the banks of the Krishna River.

Sri Sailam is a “Shiva Shakti Peetha” or “siddhakshetra”, ie where Shiva and Parvati reside permanently together. The temple is also one of 18 “Maha Shakti Peetha”.

3 – Omkareshwar, the Lord of the sound Om (Madhya Pradesh)

The Narmada is one of India’s seven sacred rivers, the others being the Ganges, Godavari, Kaveri, Saraswati, Sindhu and Yamuna rivers. Legend has it that the Narmada was the sweat that flowed from Shiva’s body when he danced his cosmic dance, the Tandhava.

Ujjain is one of the Sapta Puri, India’s seven most holy cities, and as such it is a major pilgrimage centre.

It is especially holy owing to the presence of Mahakaleshwar, “Lord of time and death”, one of the 12 Jyotir Lingams or “Lingams of light”. There are two Jyotir Lingams in the state of Madhya Pradesh, the other being Omkareshwar.

The temple is not directly accessible by road. It is reached by a trek of 18 km.

One of the legends relate that King Kamrupeshwar, King of Kamrup, was an ardent devotee of Lord Shiva. One day a demon appeared in his kingdom and began to disturb his subjects.

The demon also tried to kill the king Kamrupeshwar with his sword. However, he missed the target and the sword fell on the Shiva-Lingam worshipped by the king. Lord Shiva then appeared and killed the demon. It is said that after killing the demon, the drops of sweat of Shiva fell on the ground and were turned into a stream. This stream has then turned into a river named Bhima, the very one that flows through the city.[/section]

7 -Vishwanath, the ruler of the universe (Varanasi, Uttar Pradesh)

According to the legend in the Shiva Purana scripture, Shiva created a city and placed it on his trident, declaring that this city would be dedicated to austerities and that the faithful should go there to obtain the benefit of its spiritual aura. An earring fell from Shiva’s ear at the site of the Manikarnika Ghat. Shiva appeared there as Rudra and consecrated a Jyotir lingam. He declared that this lingam was a part of himself. He took the city from the tip of his trident and placed it on the bank of the Ganges.

The Trimbakeshwar Jyotir Lingam is situated in the village of Trimbak, 30 kms away from Nashik. It is also known for being the place where the Godavari river rises. This is one of the seven sacred rivers of India.
Legend has it that after a plot concocted by Rishi Kapila, the sage Gautama was accused of killing a sacred cow (gauhatya). He was then banished.

Gautama had to perform a long penance (tapasya) on the Brahmagiri hill that rises above the present temple. He invoked the sacred Ganga and took a bath to wash his sin. He led together with his wife Ahalya hundreds of pujas (rituals) on thousands shiva lingams. Happy to see this devotion, Shiva blessed him and brought on earth the Ganges, the holy river, which asked Shiva to remain in this place.

The devotees who come to visit the temple, are to do ablutions in the Kushavarta Teertha (sacred pond) first to purify themselves. It is believed that bathing in the waters of the Godavari bring “moksha” or salvation.

Vaidyanath or Baidyanath is a temple complex located in the city of Deoghar composed of the main Baba Baidyanath temple where the Jyotirlinga is installed, and 21 other temples.

According to the legend told in the Shiva Purana, the demon Ravana, king of Lanka, estimated that his capital would not be perfect or immune to enemies unless Shiva remains there forever. He did intense austerities in that way. Ultimately, Shiva gave him a lingam he could take with him in Sri Lanka. Shiva told him though not to put the lingam down otherwise it would remain fixed there forever.

The other gods were worried about Ravana’s new power. They thought that if Ravana could bring the lingam in Sri Lanka, he would then become invincible.

On his way back to Mount Kailash, Ravana wanted to make a Sandya-Vandana (recitation of the Vedas three times a day). He looked for someone who could hold the lingam during the ceremony. Lord Ganesha appeared dressed as a shepherd. Ravana asked him to hold the lingam and performed the ritual. Ganesha, pretending the ritual was taking too much time put the lingam down, which fixed there. When Ravana returned, he could not move the lingam. So the lingam remained at Baidyanath and the gods were happy.

10 – Nageshvara, the Lord of Cobras (Gujarat)

Nageshwar temple houses the Lord of Cobras. it is situated 18km north-east of the sacred town of Dwarka.

Ramanathaswamy temple is a major pilgrimage site for Hindus, for several reasons.

It contains one of the 12 Jyotir Lingams or “lingams of light”. It is also one of the 275 Paadal Petra Sthalams, the Shiva temples glorified in the verses of the three most venerated Nayanars (Shivaite saints), Appar, Sundarar and Tirugnana Sambandar.

Lastly, the temple is one of the Char Dham, the four most holy places in India, the others being Badrinath, Puri and Dwarka.

Near the Ellora caves, in a small village called Verul, stands the Lord of Tapasvi. It is believed to be the last Jyotir Lingam, and it is where the pilgrimage round the Jyotir Lingams ends.