Hampi, the city of the Vijayanagara kings

The city of the Vijayanagara kings is one of the most grandiose sights in India. A listed Unesco World Heritage site, it features thousands of vestiges spread over an area of more than 4000ha. Hampi is a treasure chest lost in a desert of rocks lovingly polished by time.

For the most part Hampi consists of vestiges of the capital of the 14th-16th-century Vijayanagara empire, the last great Hindu kingdom founded by Telegu princes in 1336.

At its peak, the city had a population of over a million, making it a very large town for its time. Exploring the wonders of the site one can easily imagine Hampi’s original wealth and importance. The city was abruptly abandoned, plundered and destroyed after a defeat by the Deccan Muslims in 1565.

You will need at least two days to see it all, and three if you also cross the Tungabhadra to visit the other shore. 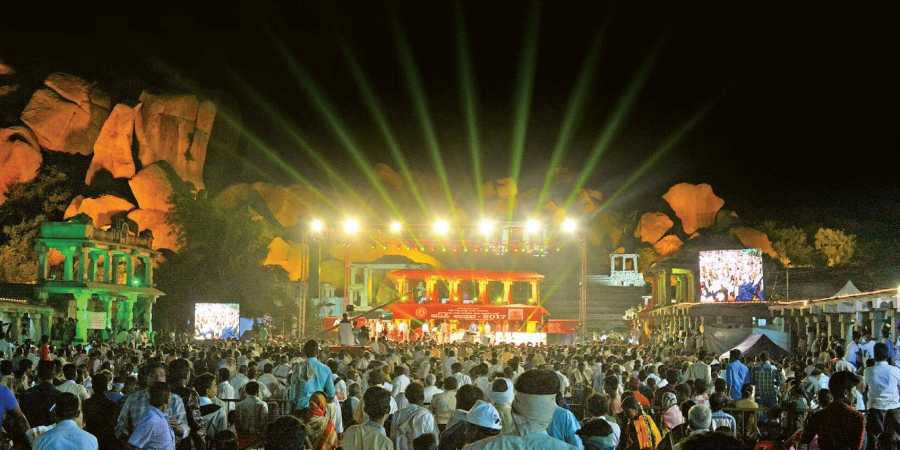 Hampi Utsav, also known as the Vijaya Utsav, Festival of Hampi has been celebrated from the times of the Vijayanagar reign. This event has been reiterated as the “Nada Utsava “ by the Government of Karnataka. This festival is attributes to the mega cultural extravaganza. Renowned artistes all over India come forward in bringing the grandiose days of the Vijayanagar Period to the present day. 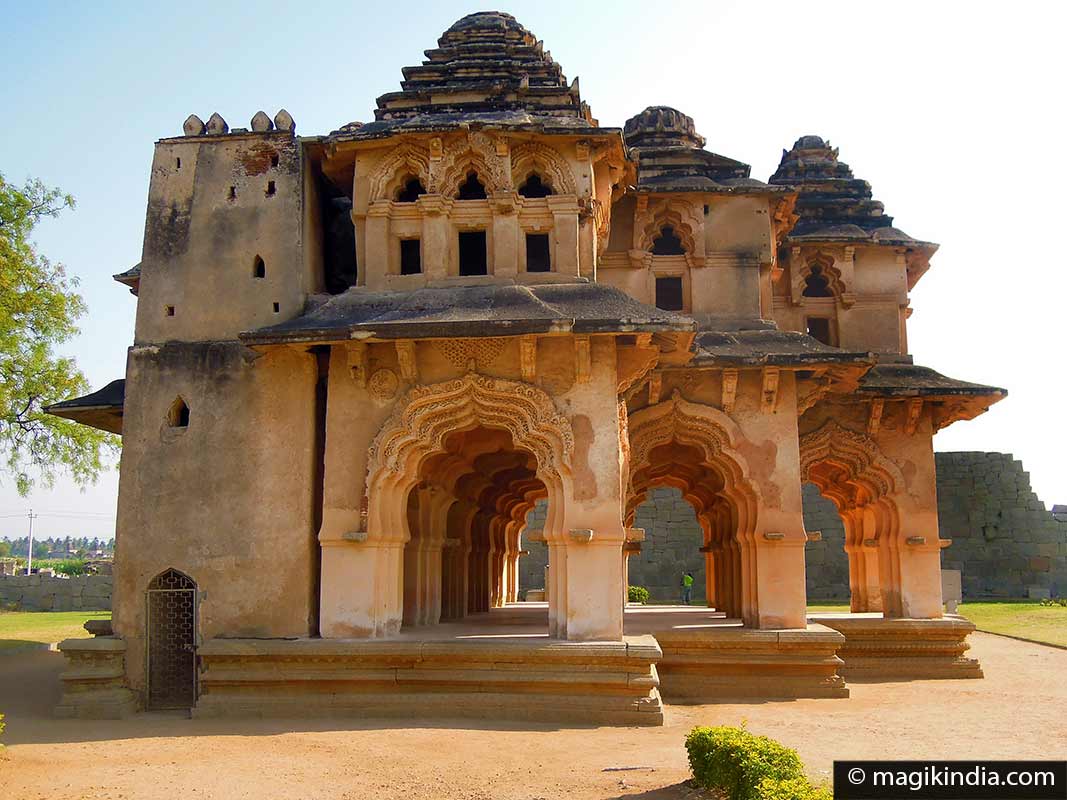 This small pink building is called Lotus Mahal because of its shape, like a half-open lotus bud.

It is not known what its function was. It is located in the zenana (the harem). However, some archaeologists think this cannot have been the zenana because it was close to the elephant stable and royal guard buildings. 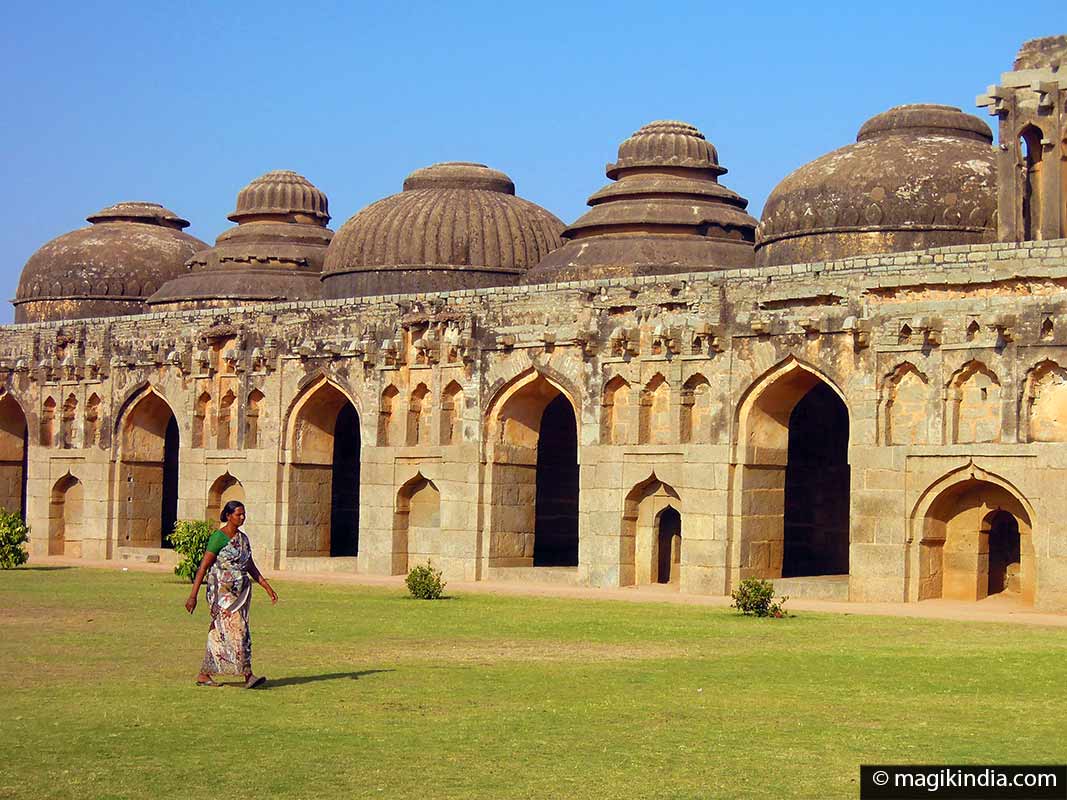 The elephant stable is one of Hampi’s best-preserved buildings.

It is a magnificent piece of architecture, built in Indo-Islamic style and comprised of 11 domed halls where the royal elephants were kept. 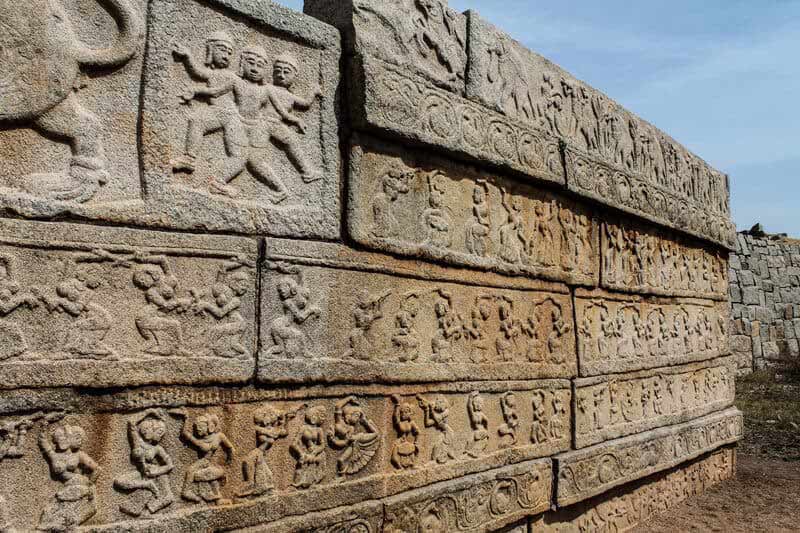 This platform structure, looking rather like the base of an Inca pyramid, was in fact a victory memorial built by King Krishnadevaraya to celebrate the conquest of the Udayagiri kingdom.

The structure was later used for various activities including as a stage for entertainments. It boasts some lovely, finely-carved bas reliefs of human figures and animals. 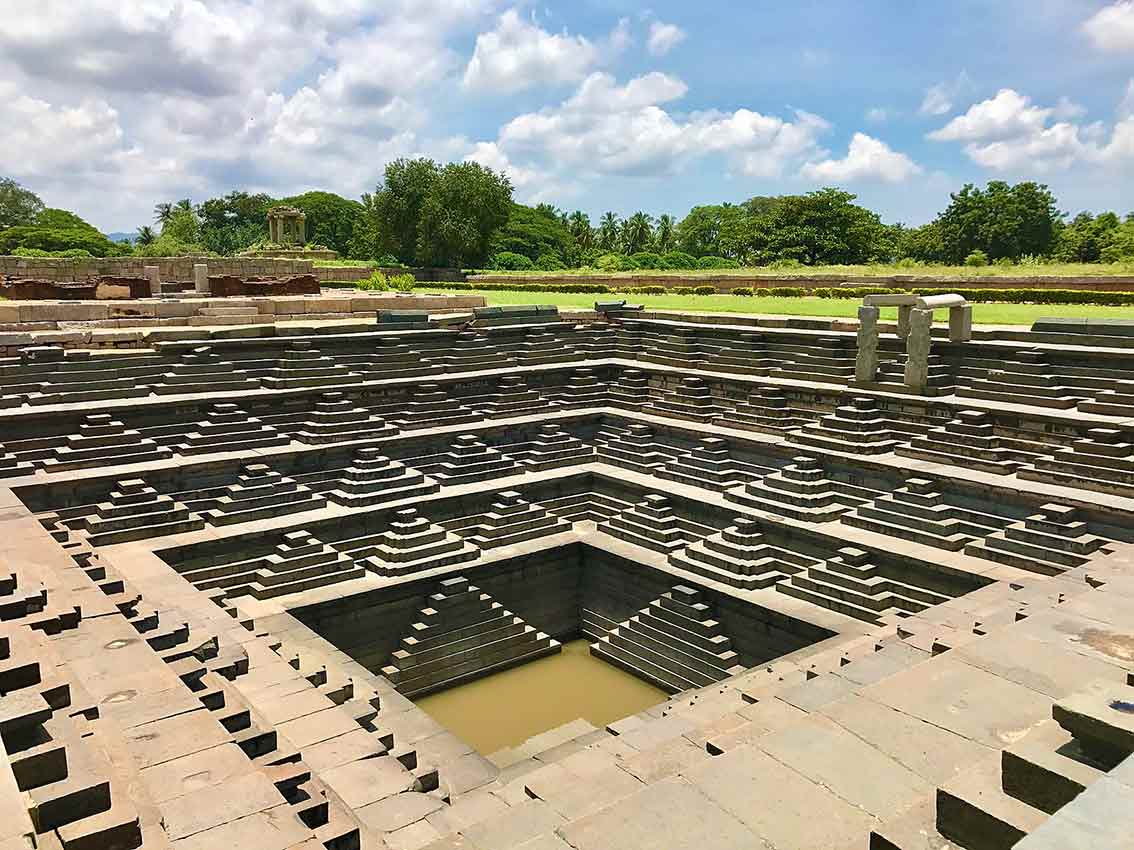 A few yards from the Mahanavami Dibba, an aqueduct raised on stone blocks guides us to a magnificent and perfectly symmetrical stepwell.

The tank is 22m wide and 7m deep. It has only recently been discovered and excavated, having been completely buried until then.[/section] 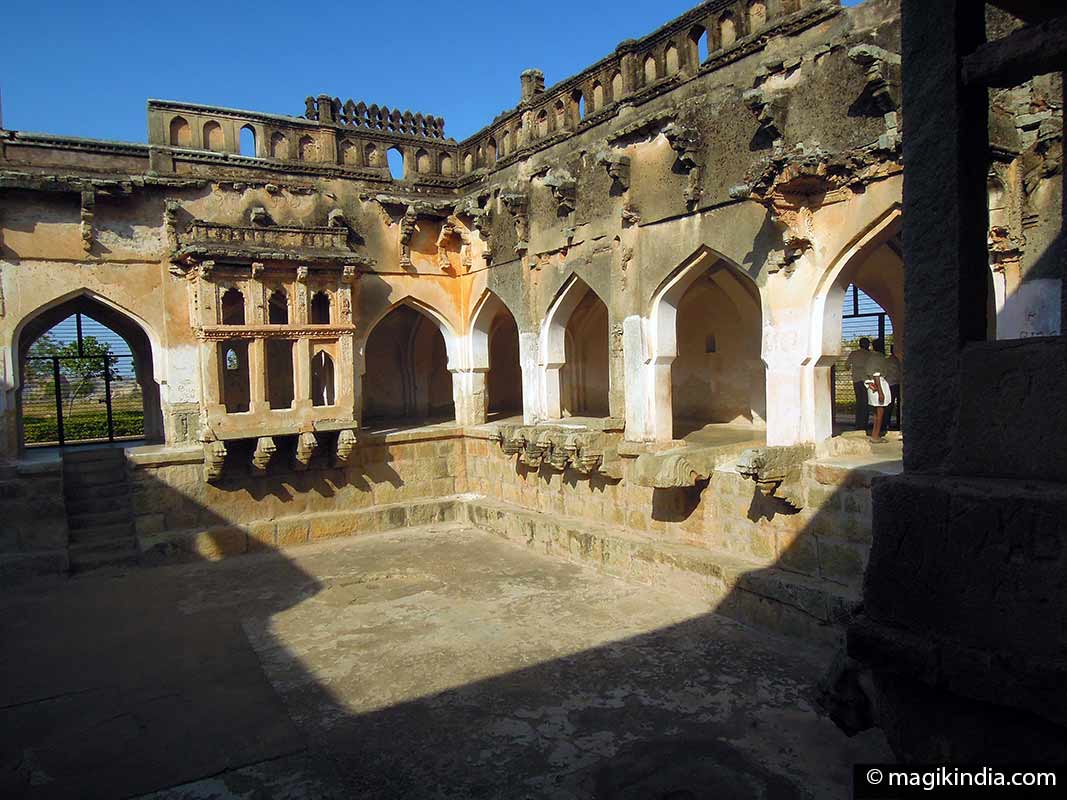 From the façade of this building you would not guess how refined and sophisticated the interior is.

The rectangular bathing tank is surrounded by a veranda and balconies, in Indo-Islamic style. It was probably used by the queens of the harem. 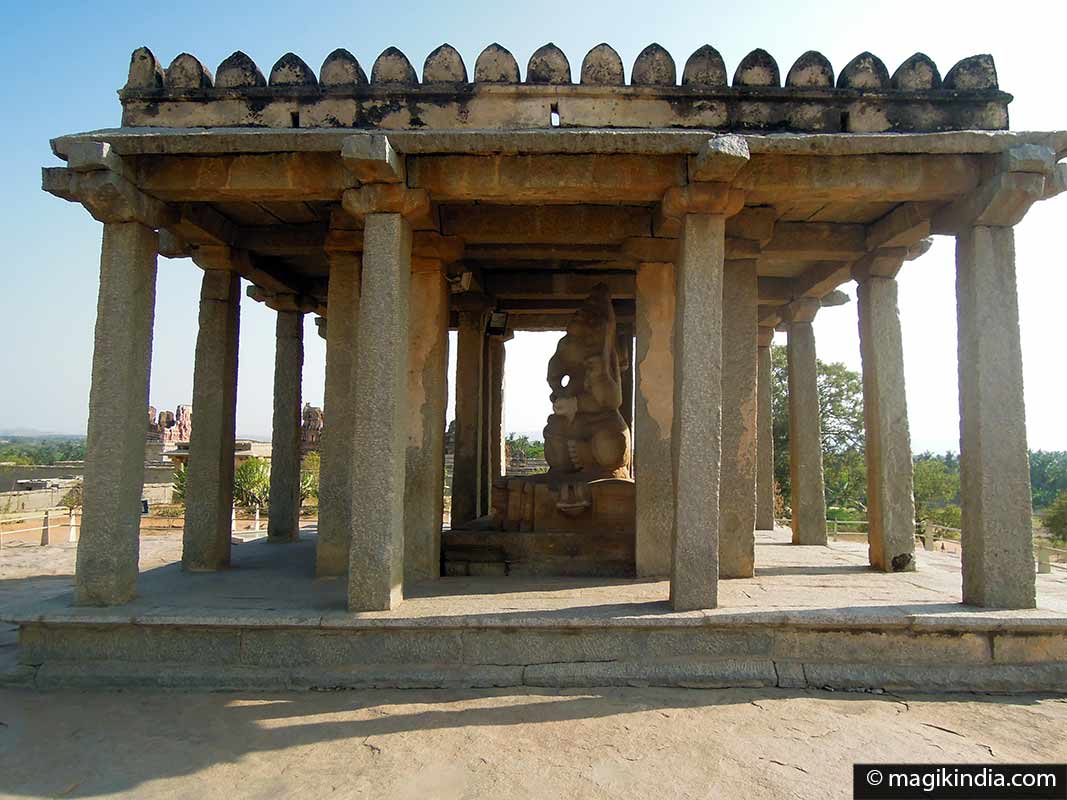 Sasivekalu means “mustard seed”, and that’s the name affectionately given to this 2.4m tall monolithic Ganesha statue, perhaps because of the god’s round belly.

In Hindu mythology, Lord Ganesha is known for his gluttony. It is said that one day he ate so much that his belly almost burst; so he caught a snake and tied it round his middle by way of a support belt. 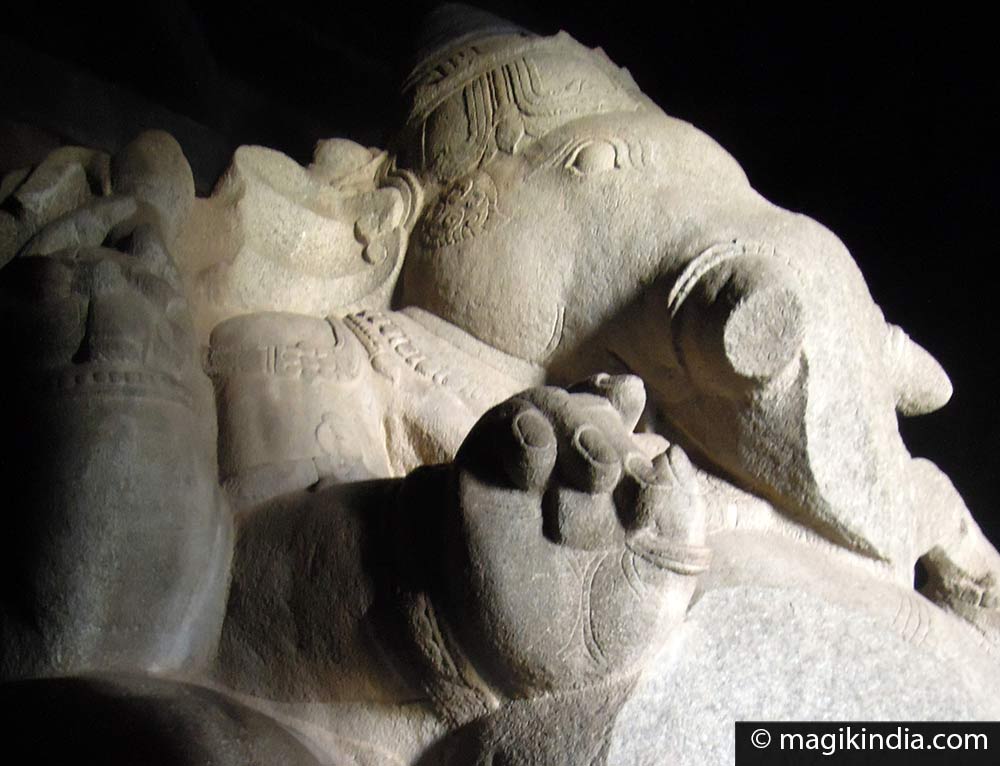 Kadalekalu is another monolithic statue of Ganesha. It is 4.5m tall and stands in a sanctuary whose tall columns are sculpted with mythological themes. 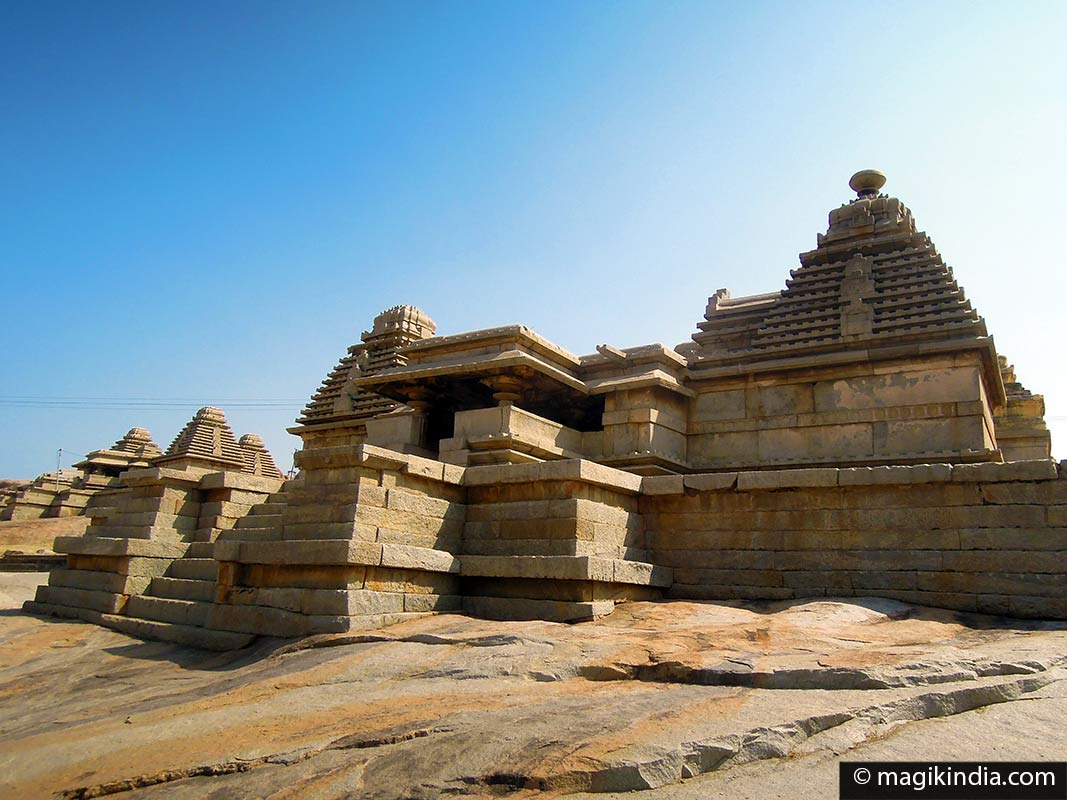 This hill near the Virupaksha temple is dotted with 30 small sanctuaries, arcades and pavilions.

The entire hill was once fortified with thick stone walls whose vestiges can still be seen.

According to legend, it was on Hemakuta hill that Lord Shiva paid penance before marrying Pampa, a goddess associated with the river Tungabhadra. Shiva was so impressed by her devotion to him that he agreed to marry her. Thereupon a rain of gold fell on the hill. (Hema is “gold” in Sanskrit).

That is why some of the temples on the hill are dedicated to Shiva. Some are earlier than the Vijayanagara period; one dates from 1309-1310.Others are notable for the pyramid shape of their shikharas (tower above the shrine), like those of Jain temples. 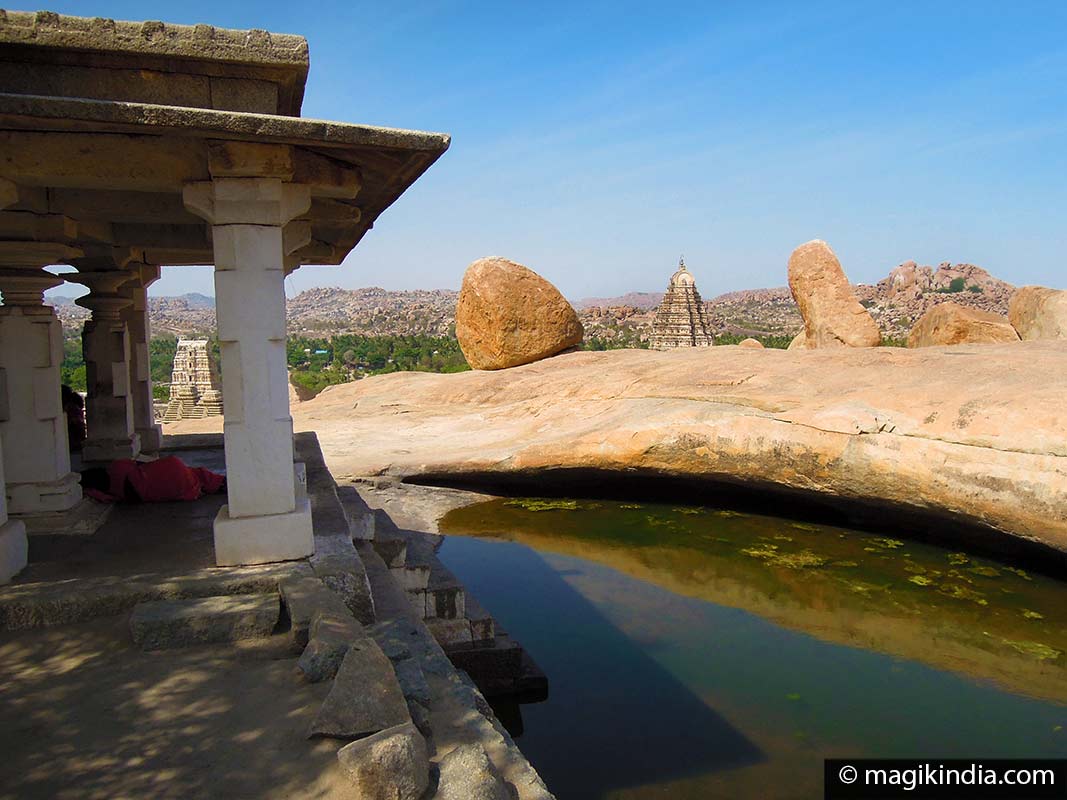 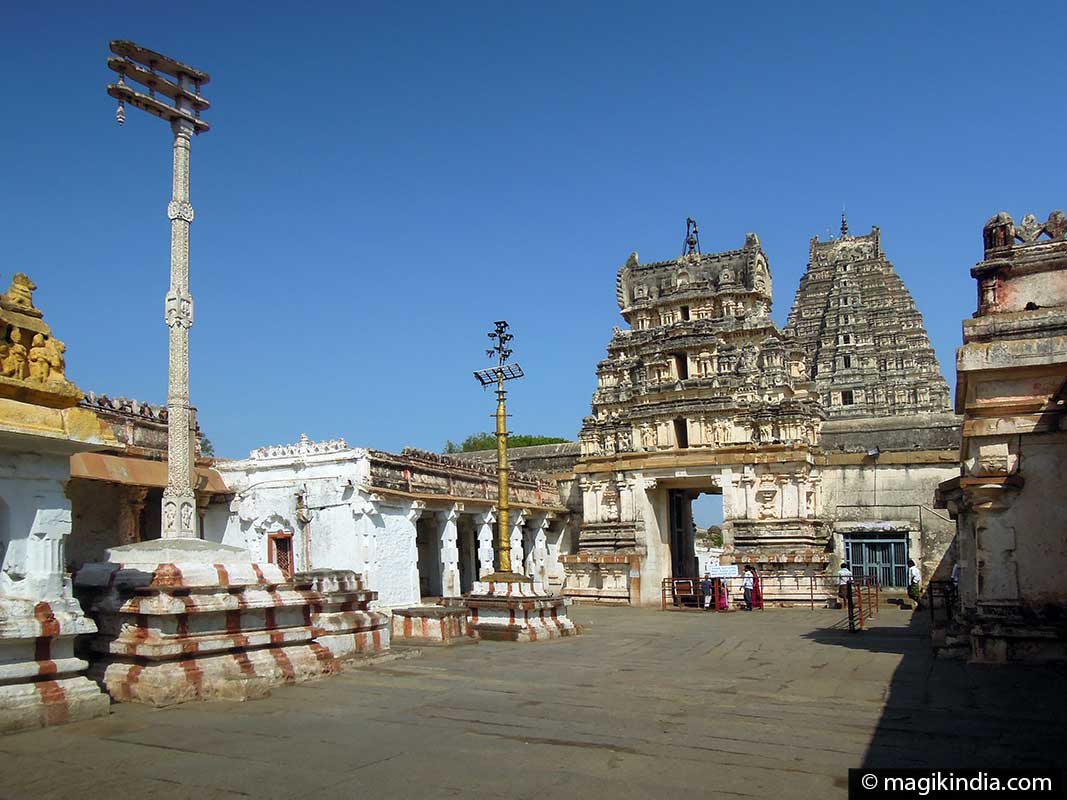 Virupaksha temple, still in operation, is Hampi’s main temple. Its story begins in the 7th century, long before the Vijayanagar empire. At that time the temple was a small one; the Vijayanagar kings enlarged it. It is dedicated to Shiva in his Virupaksha form, i.e. as partner of the local goddess Pampa. 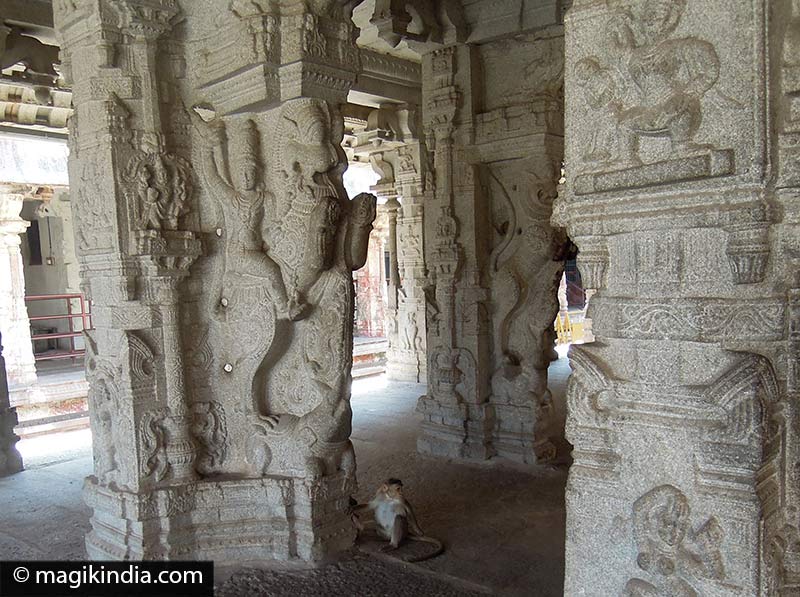 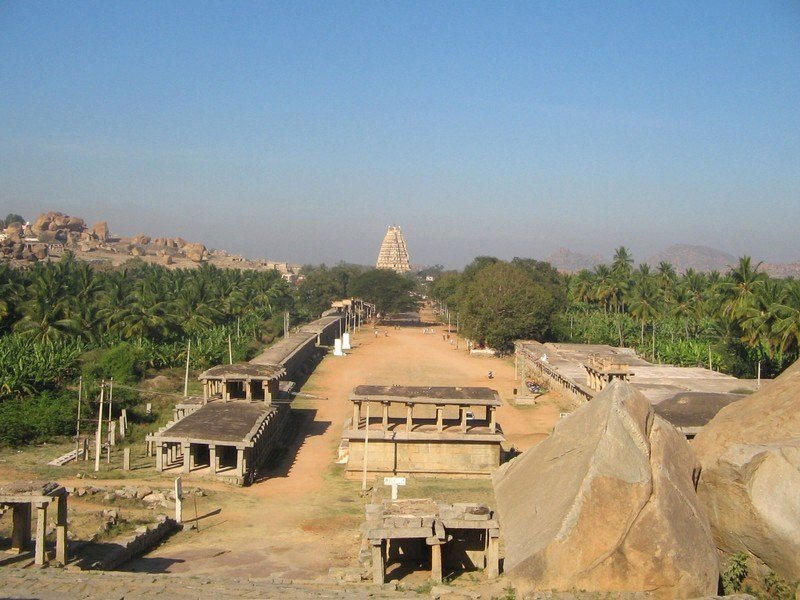 The Hampi bazaar, also known as Virupaksha Bazaar, is one long street from Virupaksha temple to the Nandi monolith.

Both sides of the street are lined with pavilions that once serves as shops and noble dwellings. Later, the local population took over the pavilions; they were evicted quite recently. 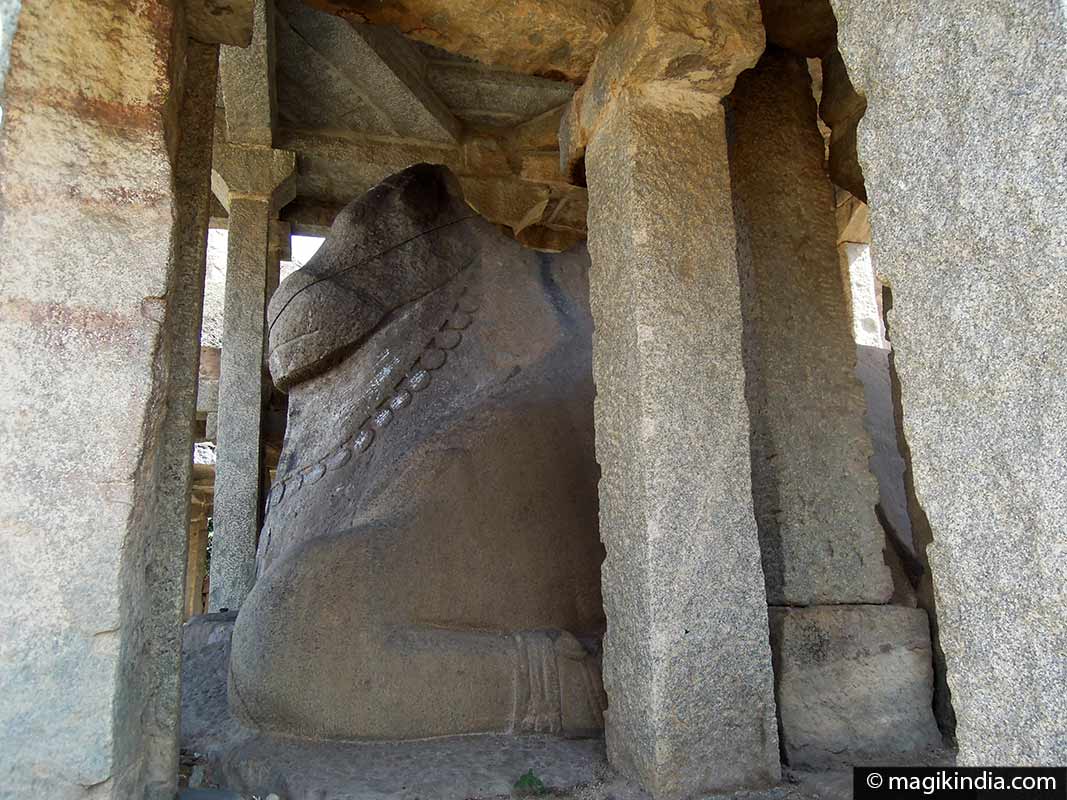 At the far end of Hampi Bazaar stands a large statue of Nandi carved from a single rock. Nandi is Shiva’s vahana (mount or vehicle). 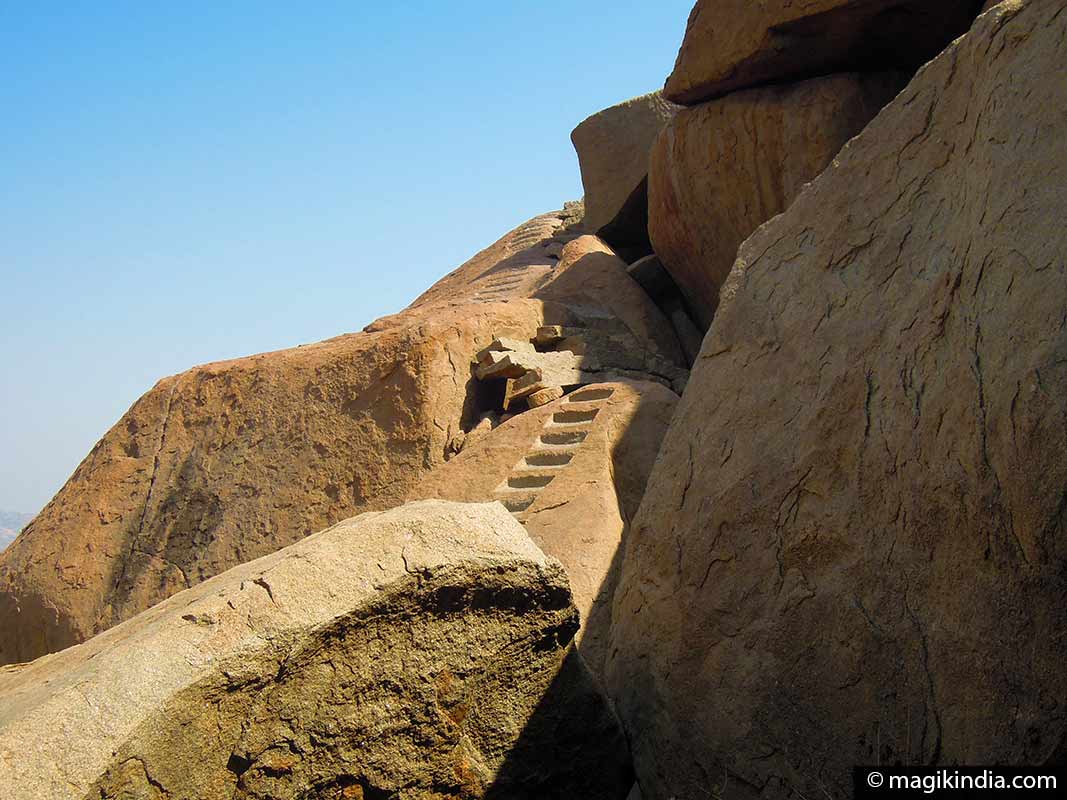 This is where to go for a panoramic view of Hampi.

After a half-hour climb among boulders a ruined temple to Veerabhadra greets you at the top.

Matanga Hill is mentioned in Hindu mythology, in the Ramayana. It is where the sage Matanga is said to have had his hermitage. 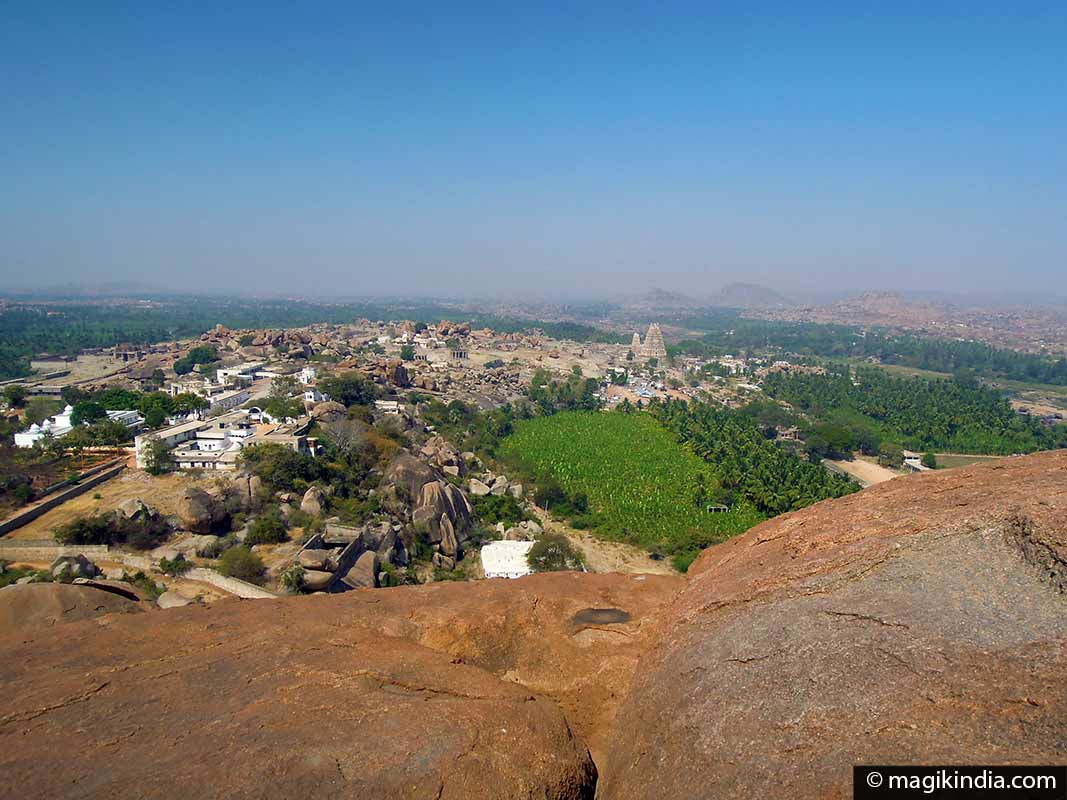 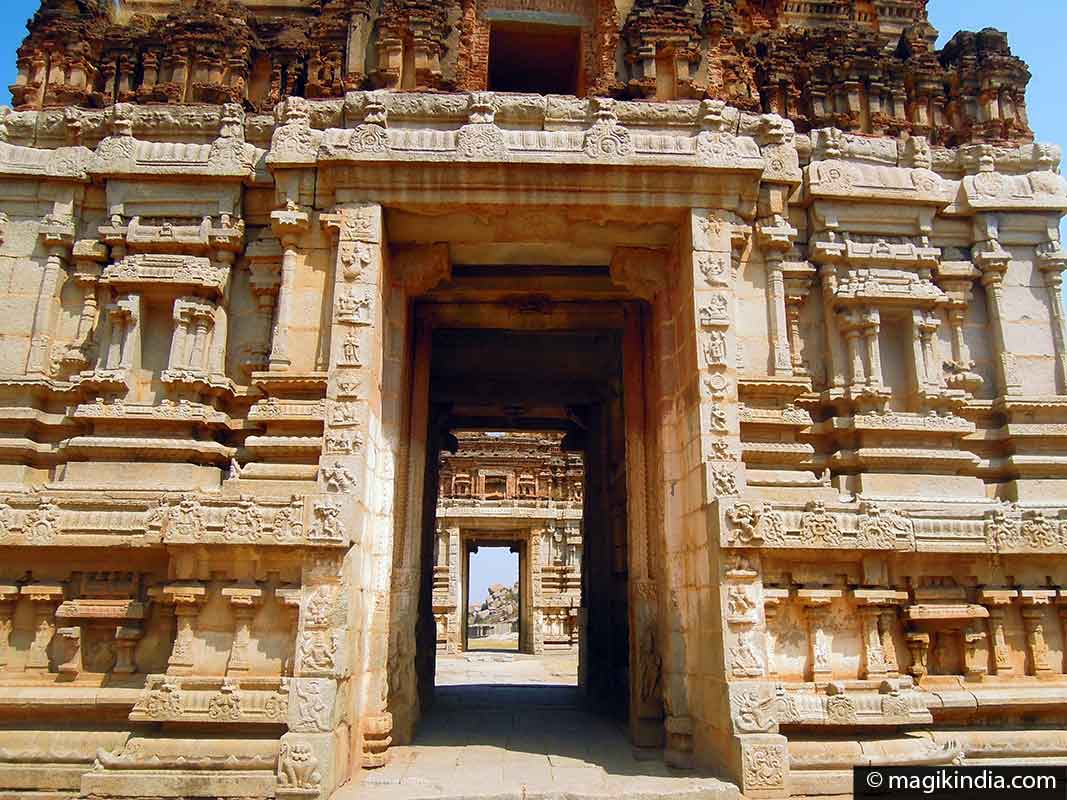 Built in 1534, this temple is an excellent example of Vijayanagar architecture in its most advanced form.

It was one of the last building projects before the fall of the empire. It is dedicated to Tiruvengalanatha, a form of the Hindu god Vishnu. 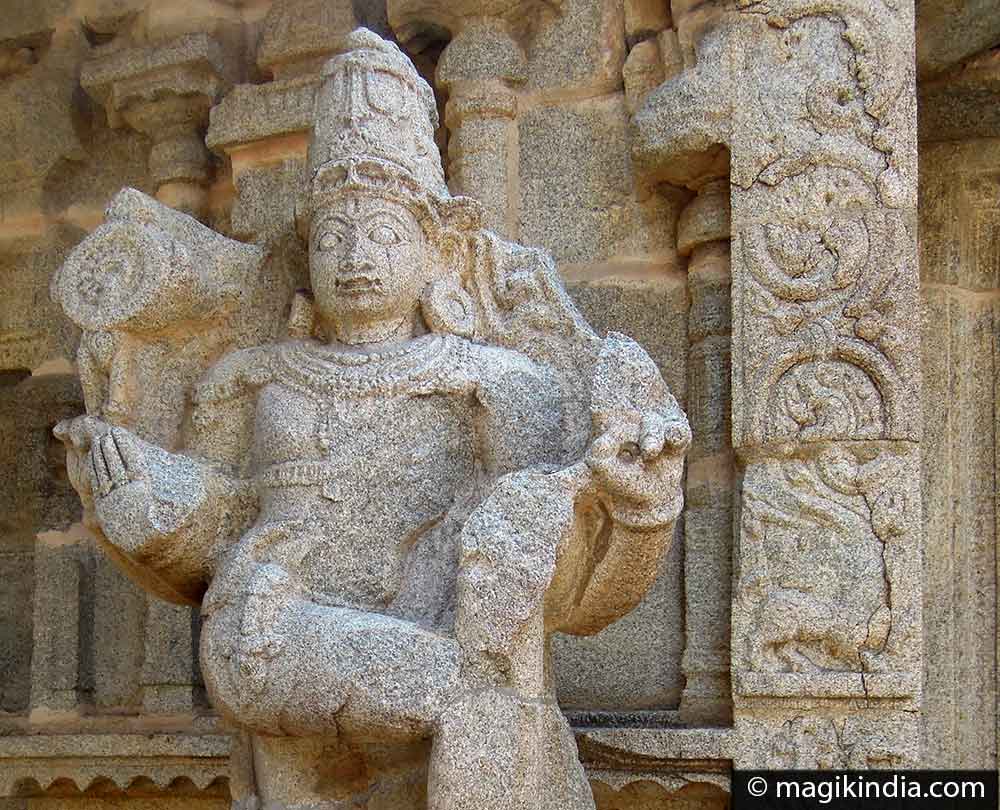 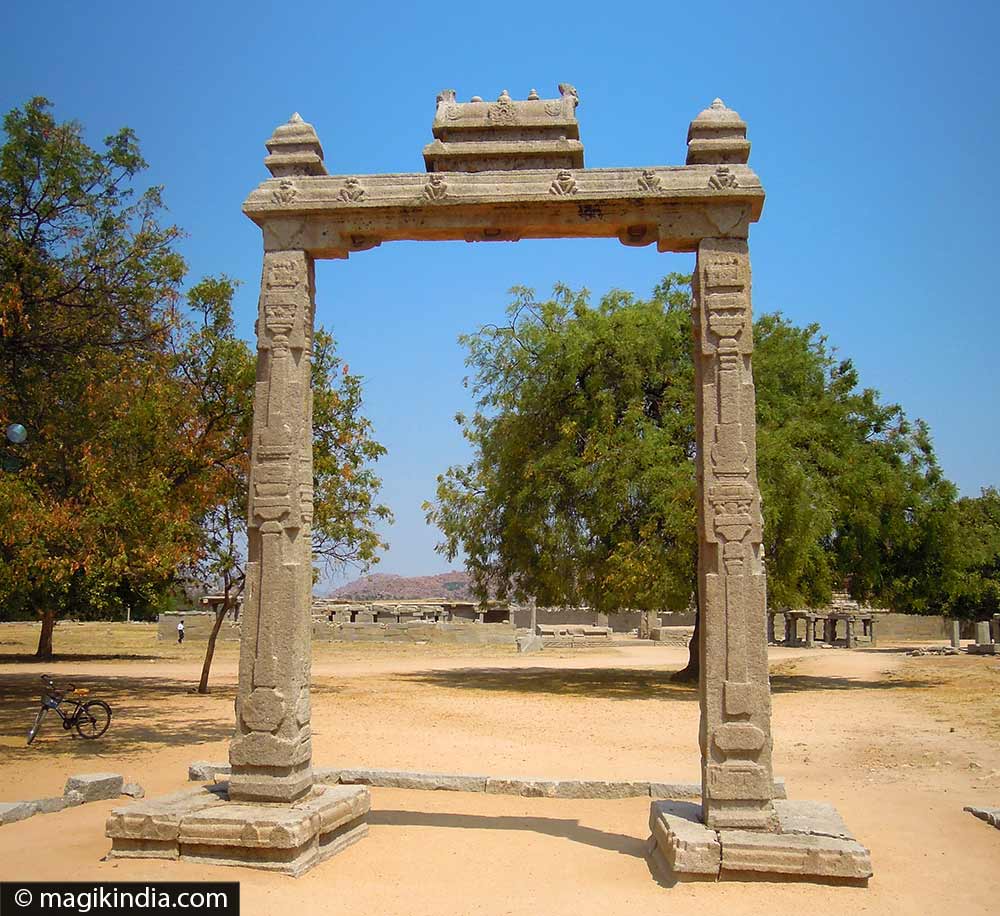 King’s Balance is a 5m tall structure from which a balance used to hang.

It is said that on special occasions the king weighed himself against gold and precious stones, which were then distributed among the priests. 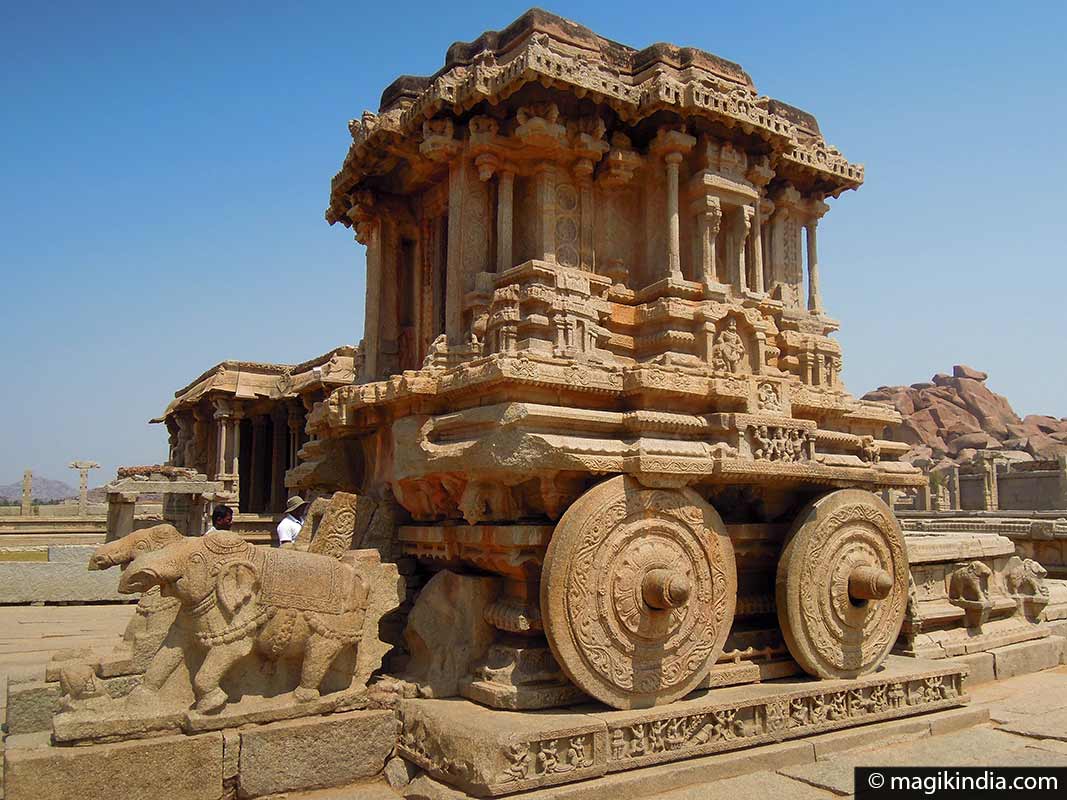 This Vishnu temple is the most famous of Hampi’s temples.

It is in the Dravidian style and magnificently sculpted. Apart from the very beautiful stone chariot, one of the temple’s chief attractions is its set of 56 musical pillars, also known as SA RE GA MA pillars after the names of the first notes in the Indian scale. There is a magnificent ancient frangipani tree in the courtyard. 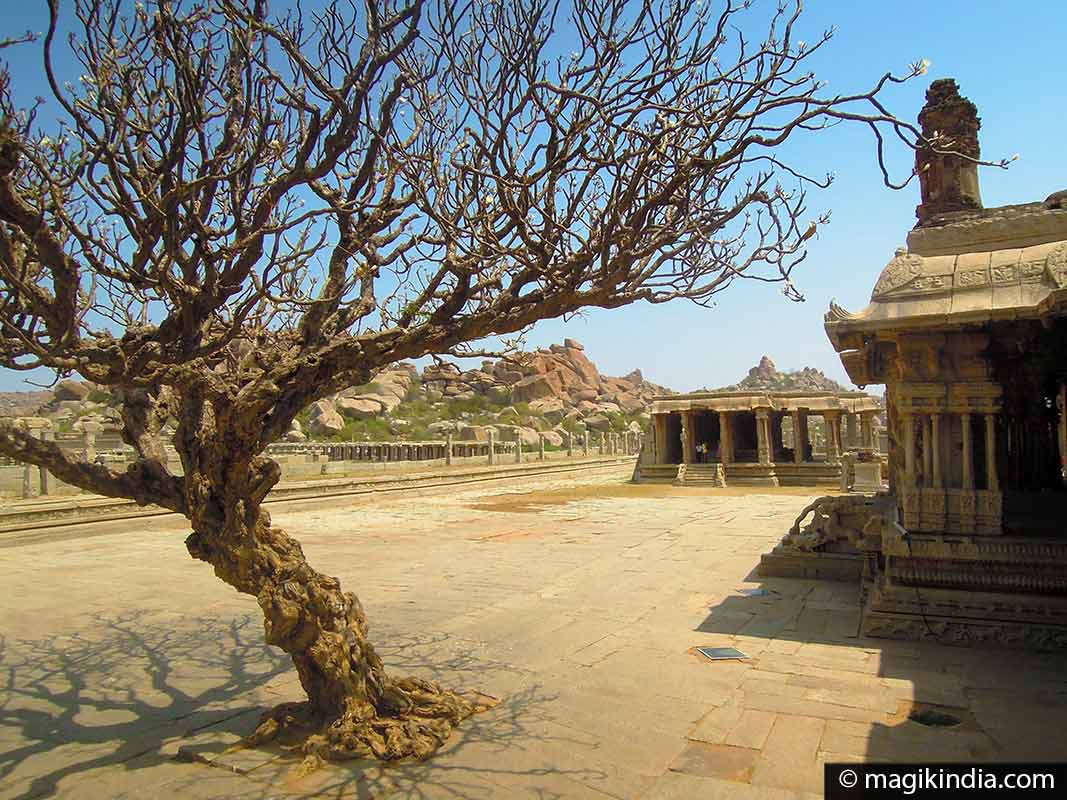 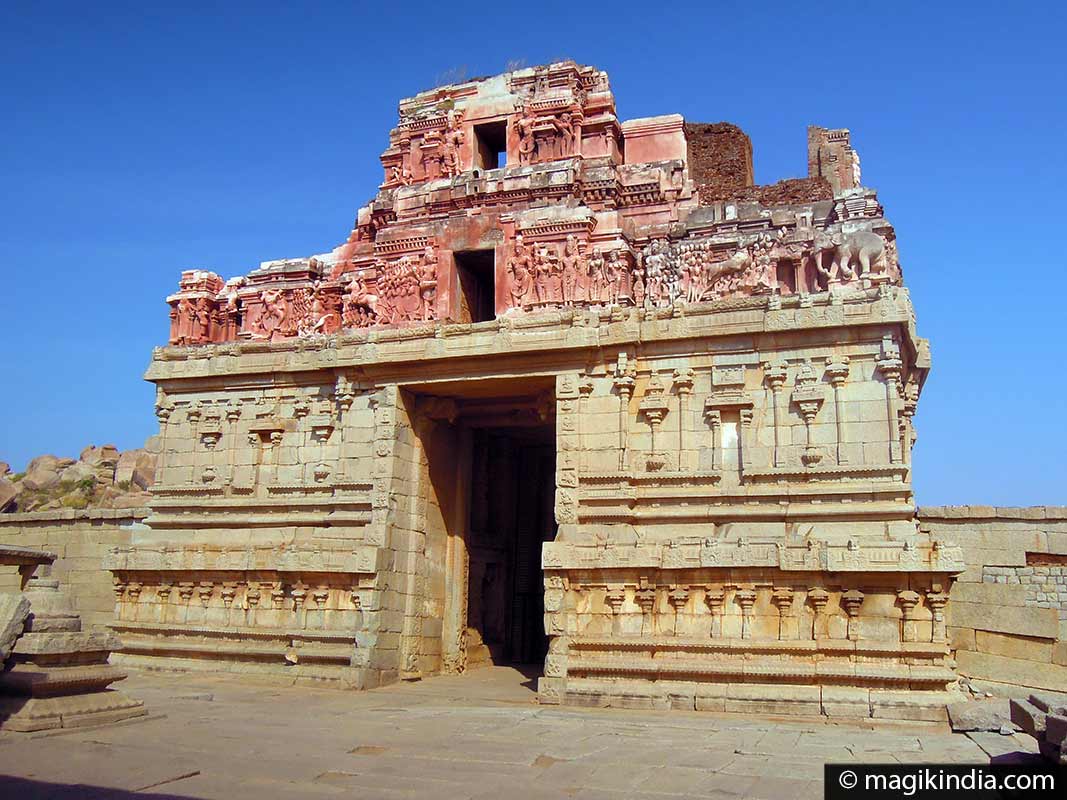 This temple was built by King Krishnadevaraya in 1513 to celebrate the conquest of the Udayagiri kingdom.

The main idol in the temple was a representation of Balakrishna (Lord Krishna as a child); it is now on display in the Government Museum, Chennai.

The sculptures in the temple are particularly sophisticated, especially the entrance with its red gopuram (gateway tower), but also the balustrades of the temple staircases flanked by yalis (mythological lions).

Opposite the temple is a pushkarani or holy water tank. Most large temples in Hampi had one. They had a functional use of course, but also served ritual purposes. 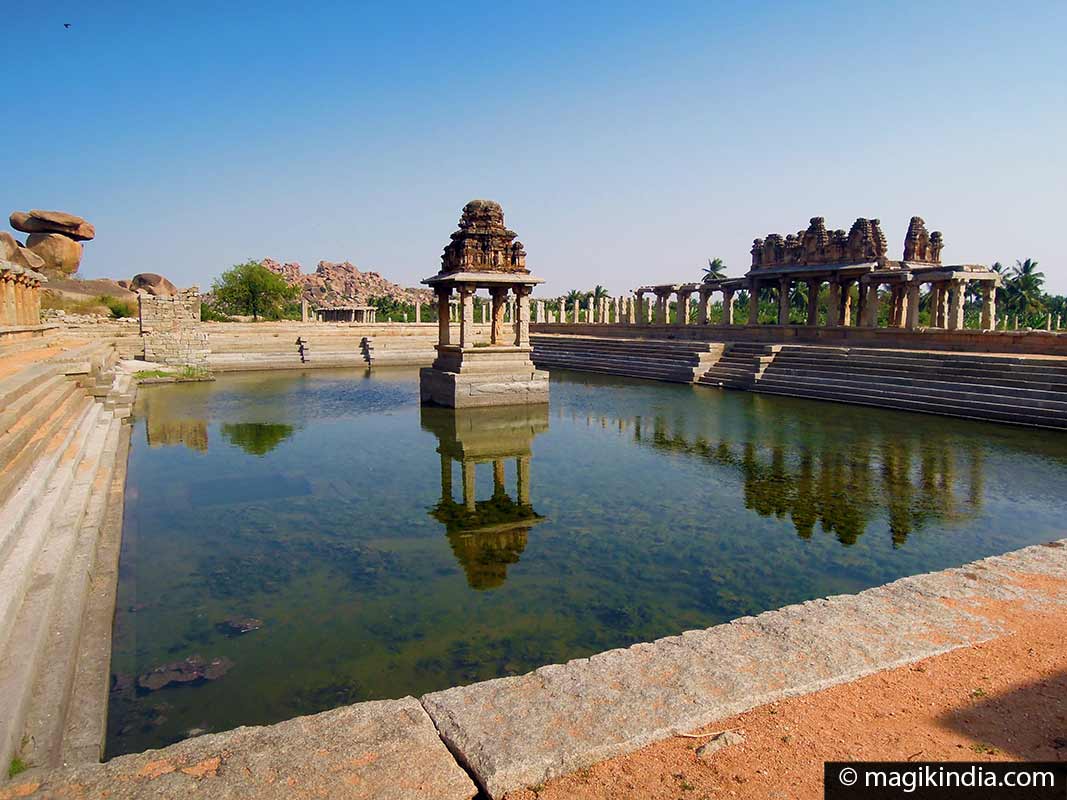 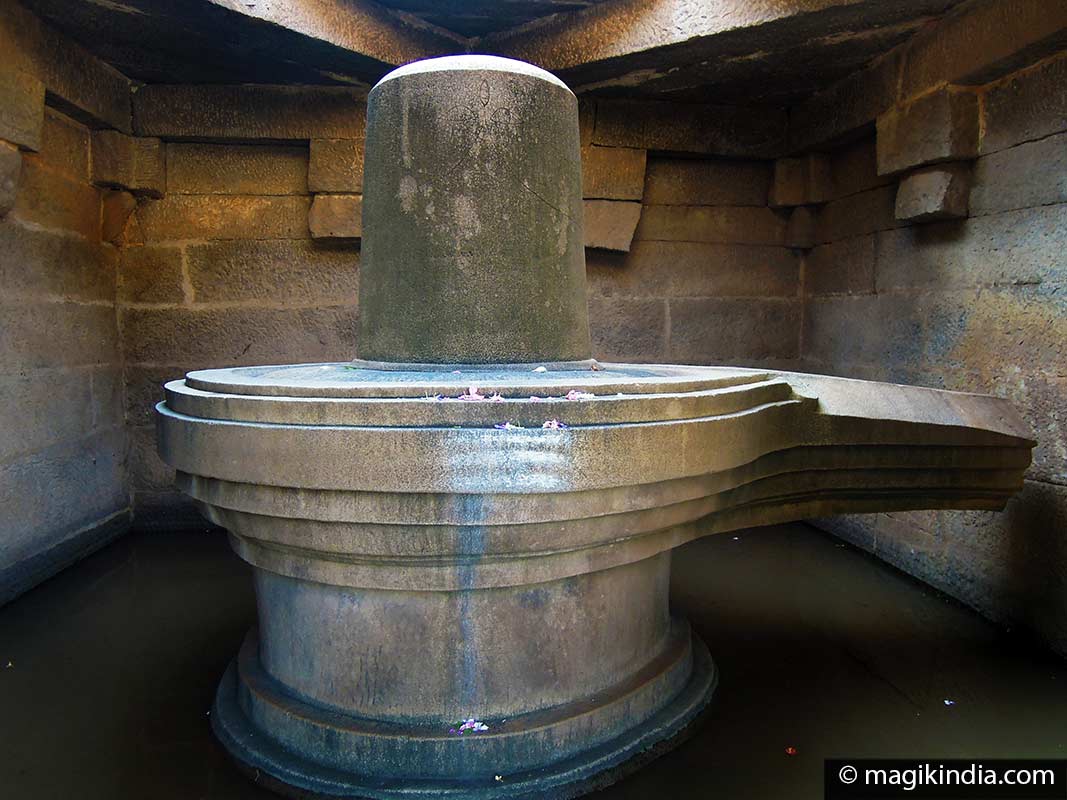 One of the finest monolithic Shivalingams I have ever seen.

This 3m lingam stands on a pedestal in a square tank like an impluvium, in a small temple.

The lingam receives rainwater from the roof opening, and a system of canals carries water to the tank so that it is always full of water. 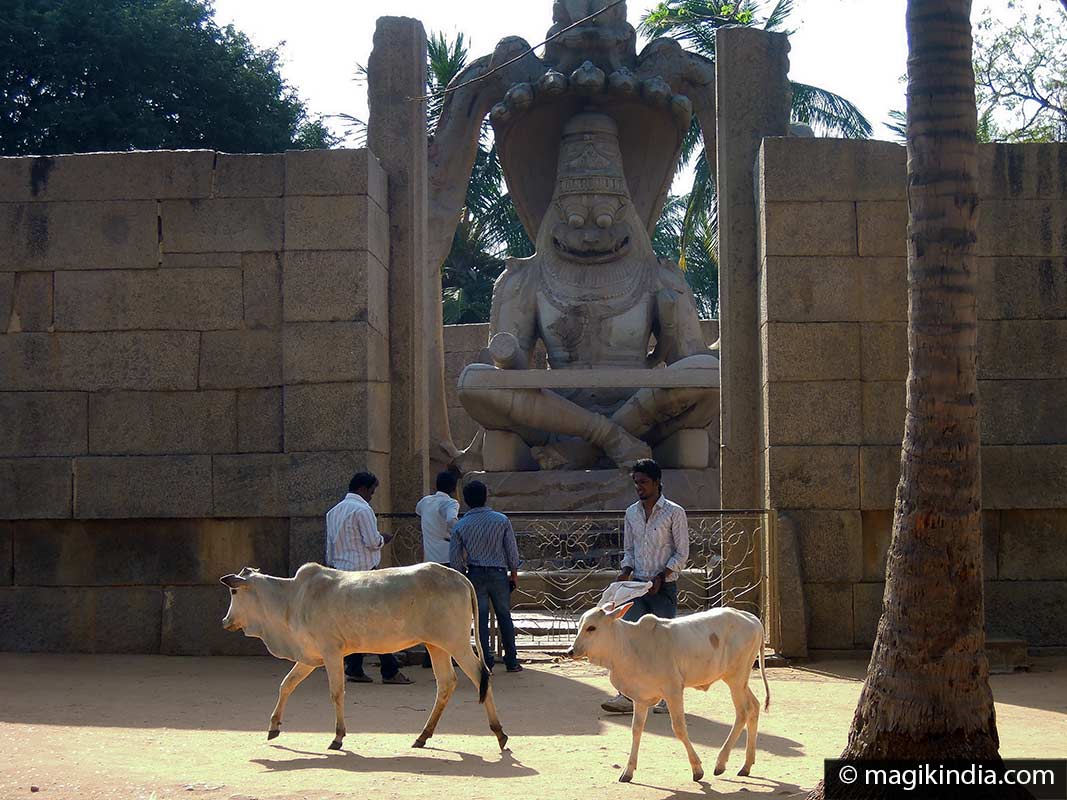 Narasimha (half man, half lion) is one of the ten incarnations of the Hindu god Vishnu. He looks ferocious with his lion’s face and bulging eyes.

This is the largest statue in Hampi and also the most emblematic. Narasimha is seated on a giant coiled snake called Shesha. The snake’s seven heads form a hood over Narasimha’s head. The god is seated in a yoga posture, legs crossed, with a mediator’s support belt round his knees. 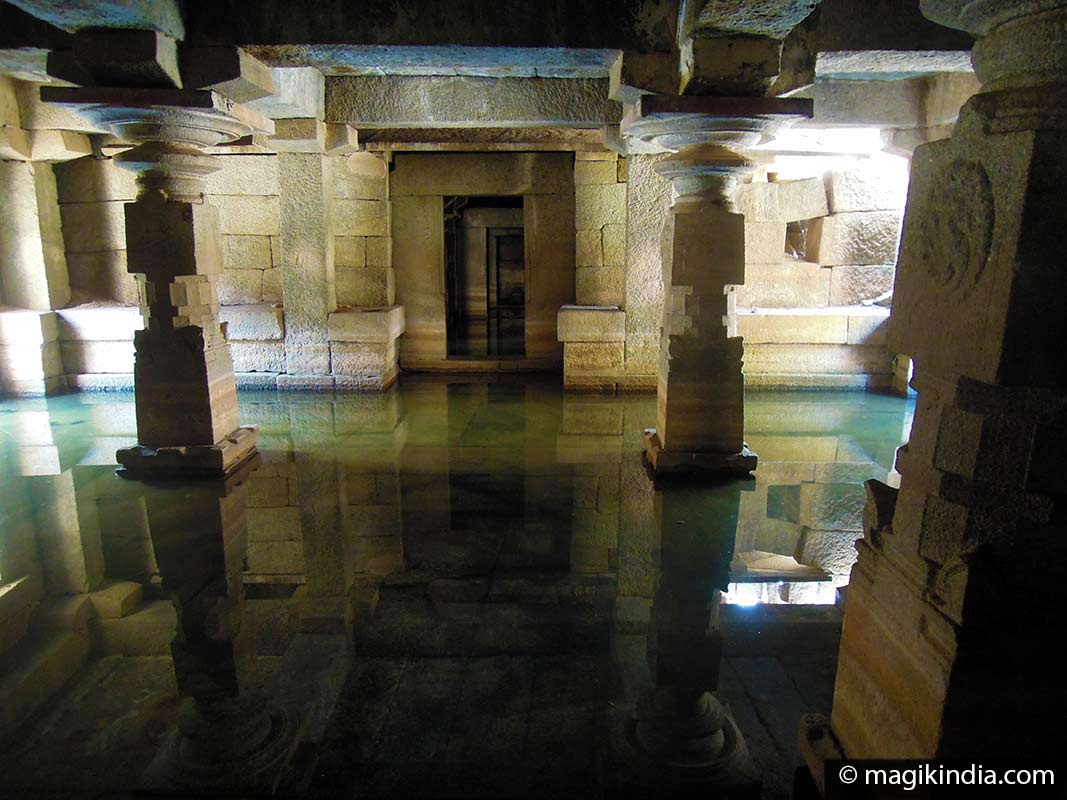 This temple to Shiva was built below ground level and is partly submerged in water. It is not known why it was built like that, but it is said to be one of Hampi’s oldest temples.

VOUS AIMEREZ PEUT-ETRE AUSSI...
Badami, some of the earliest Hindu temples
Badami, formerly known as Vatapi was the capital of the early Chalukya dynasty, from 540 to 757 AD. It is famous f...
Bengaluru (Bangalore), capital of Karnataka
Having earned a sound reputation in the aerospace and data processing industries, Bengaluru (formerly Bangalore), ...
Belur (Beluru), city of the "handsome Vishnu"
Belur was the first capital of the Hoysala Empire. This city was then so esteemed that it was compared to the "ter...
Udupi, a Mukti Kshetra pilgrimage site
Udupi, 60km from Mangaluru, is best known for its famous temple devoted to Krishna, one of the incarnations of the...
Mangaluru (Mangalore), city of the Mangaladevi goddess
Mangaluru is a port city on the Arabian Sea. Much of India's coffee output leaves from here. The town's main attra...
Pattadakal, Chalukya kings' coronation place
Pattadakal, a World Heritage Site, is, along with Aihole and Badami, the architectural gems of northern Karnataka ...
← Chettinad, the forgotten splendour of Tamil Nadu
Vijayawada, city of the goddess Kanaka →