Most Indian breads are flatbreads, made without leavening and cooked on a flat or concave pan called a tava or fried in oil. Bread is a staple of the Indian diet, especially in the North where a meal without chapatis is almost unthinkable.

I make a small aside concerning the flours used in India.There is a wide variety of them but wheat flour, rice, lentils, chick peas and corn are the most commonly used.

Gluten-free and rich in protein, lentil flours are commonly used in India. Here are the best known:

It can be made from white or brown rice. In southern India, it is a component of several breads like idli and dosa.

Corn flour is the most consumed flour after wheat flour, tied with rice flour. It is involved in many dishes and breads like “ki roti maki” the favorite Punjab bread consumed during the winter season.

The most popular breads of India 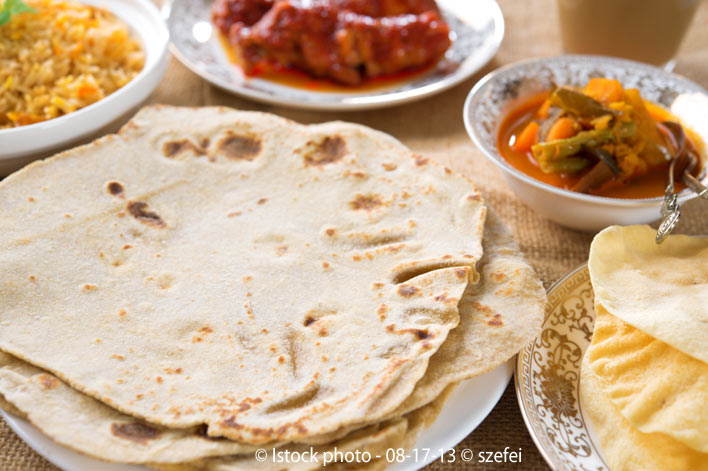 Let’s start by the most common bread of North India. Chapati is an unleavened flatbread (also known as roti) made out Atta flour and cooked on a tava (flat skillet).

The word chapat in Hindi means “to slap”, and the traditional method of forming rounds of thin dough is by slapping the dough between the wetted palms of the hands. With each slap, the round of dough is rotated.

Often, the top of a chapati is slathered with butter or ghee (clarified butter). A piece of chapati is torn off and used to pick up the ingredients that make the meal. 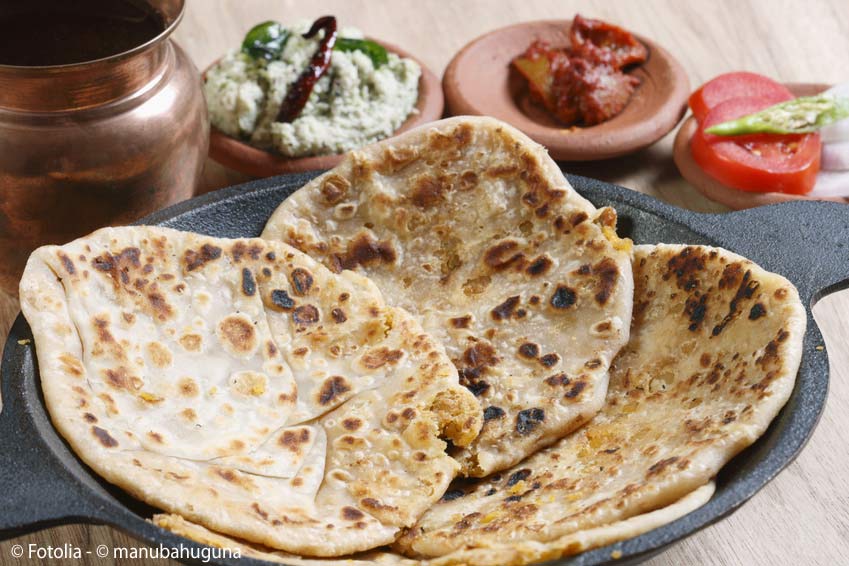 A paratha is a flatbread that originated in the north of the Indian Subcontinent. It is still quite prevalent in the north of India, where wheat is grown and is the traditional staple of the area.

Paratha is an amalgamation of the words “parat” and “atta” which literally means layers of cooked dough. Parathas are thicker and more substantial than chapatis/rotis and this is either because, in the case of a plain paratha, they have been layered by coating with ghee or oil and folding repeatedly

Parathas can be eaten as a breakfast dish or as a tea-time (tiffin) snack. 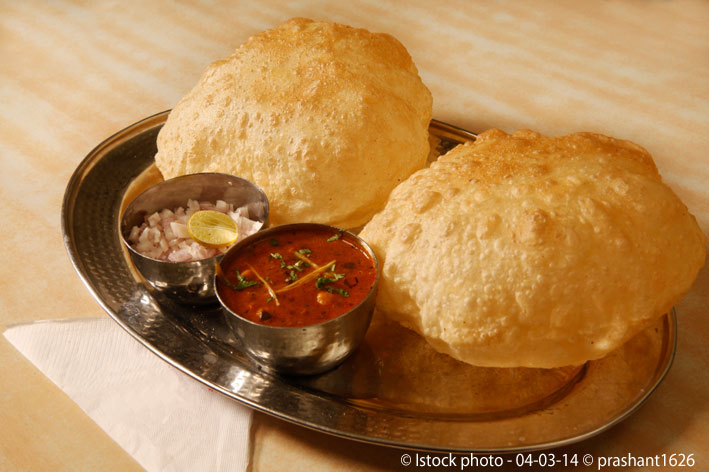 Poori is an unleavened deep-fried Indian bread, commonly consumed on the Indian subcontinent. It is eaten for breakfast or as a snack or light meal.

It is usually served with a curry or bhaji. Poori is prepared with wheat flour, either atta (whole wheat flour), maida (refined wheat flour), or sooji (coarse wheat flour). Maida flour is the most common flour used in making Pooris.

A dough of flour and salt is either rolled out in a small circle or rolled out and cut out in small circles and deep fried in ghee or vegetable oil. While deep frying, it puffs up like a round ball because moisture in the dough changes into steam which expands in all directions. When it is golden-brown in color, it is removed and may be served hot or saved for later use. 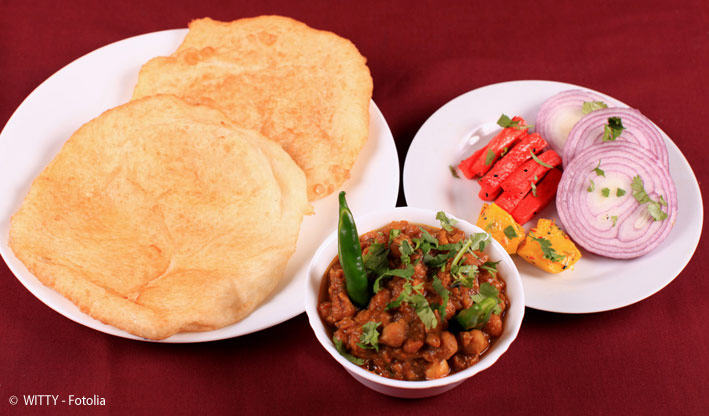 Bhatura is a fluffy deep-fried leavened bread from North India.

A typical recipe includes white flour (maida), yogurt, ghee or oil, and either yeast or baking powder. Once kneaded well, the dough is left to rise, and then small balls of it are either hand-rolled or flattened using a rolling pin. Then the bread pieces are deep fried until they puff up into a lightly browned, soft, fluffy bread, which is elastic and chewy. 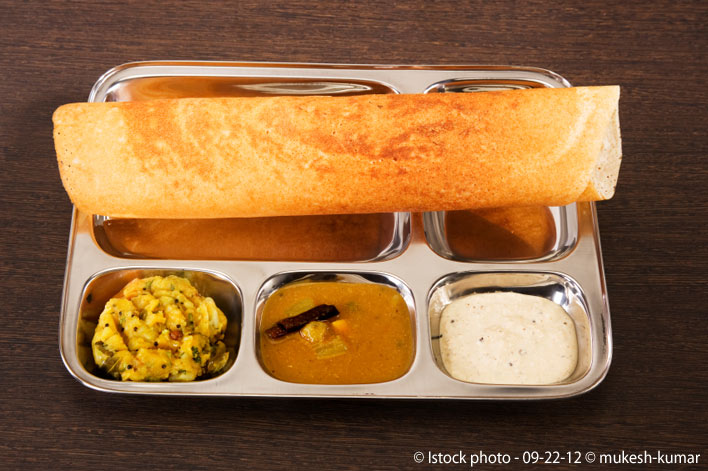 Dosa is a fermented crepe made from rice batter and black lentils. It is a staple dish in South Indian.

A mixture of rice and urad dal that has been soaked in water is ground finely to form a batter. Some add a handful of fenugreek seeds soaked along with the rice. The proportion of rice to lentils is generally 4:1 or 5:1. The batter is allowed to ferment overnight.

After the overnight fermentation, the batter is mixed with water to get the desired thickness. The batter is then ladled onto a hot tava (griddle) greased with oil or ghee (clarified butter). It is spread out evenly with the base of a ladle or bowl to form a pancake. A dosa is served hot, either folded in half or rolled like a wrap.

It is also usually served with chutney and sambar. 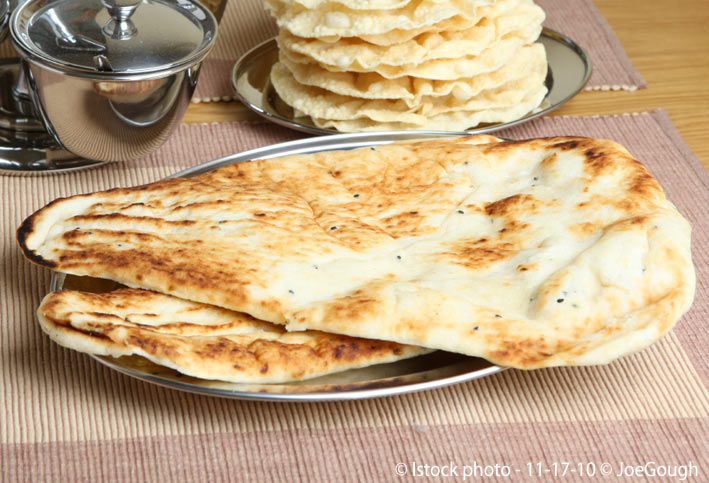 Naan is a leavened, oven-baked flatbread. Generally, it resembles pita and, like pita bread, is usually leavened with yeast or with bread starter (leavened naan dough left over from a previous batch);

unleavened dough (similar to that used for roti) is also used. Naan is cooked in a tandoor, from which tandoori cooking takes its name. This distinguishes it from roti, which is usually cooked on a flat or slightly concave iron griddle called a tava.

Typically, it is served hot and brushed with ghee or butter. It can be used to scoop other foods, or served stuffed with a filling. 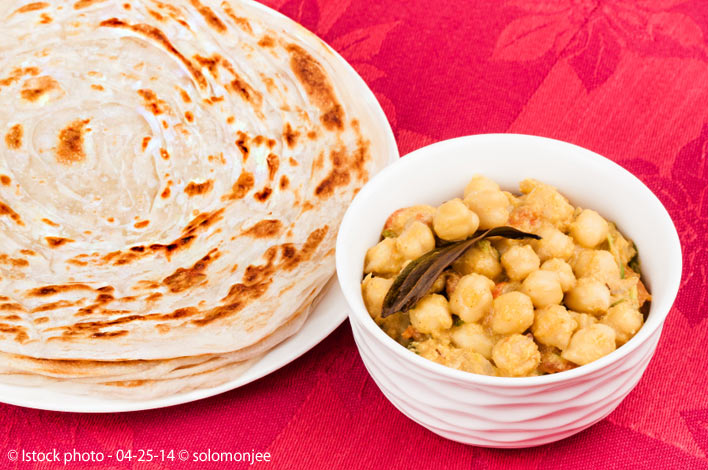 A parotta is a layered flatbread made from maida flour, from the culinary tradition of parts of Southern India, especially Tamil Nadu as well as Kerala.

Parottas are usually available as street food. It consists in thin multiple layers which are flaky and smooth at the same time.

It is usually eaten with different curries. 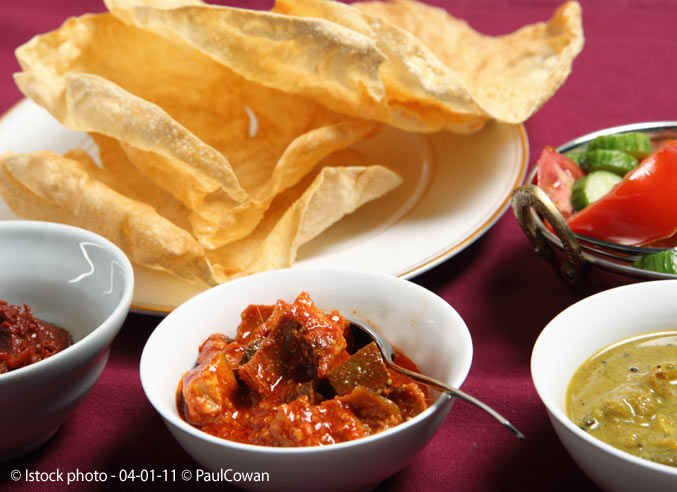 Papadum or papad is a thin, crisp disc-shaped food typically based on a seasoned dough usually made from peeled black gram flour (urad flour), fried or cooked with dry heat.

Flours made from other sources such as lentils, chickpeas, rice, tapioca or potato, can be used.

Papadums are typically served as an accompaniment to a meal or as an appetizer or snack, sometimes with toppings such as chopped onions, chopped carrots, chutneys or other dips and condiments. 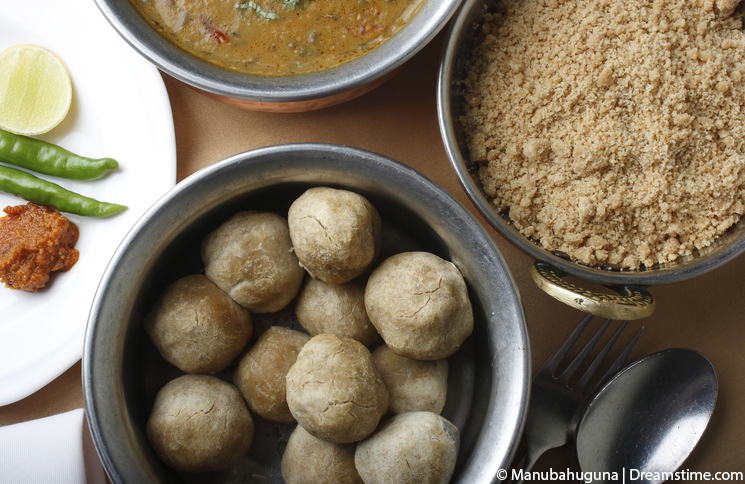 Baati is a hard, unleavened whole-grain wheat bread of Rajasthan.

The procedure for making Baatis is very different than any North Indian bread. Traditionally Baatis are first boiled in the water and then baked in the clay oven (Tandoor) or grill. 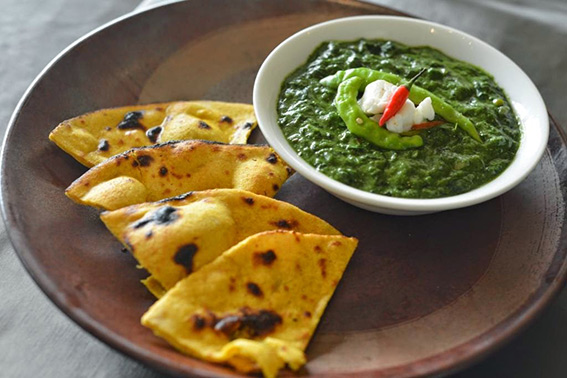 Like most breads in indian cuisine, it is baked on a tava. Makki di roti is generally made during winter in Punjab and is perhaps best known when accompanied with saag (a leaf-based dish like spinach, mustard leaf…), makkhan (butter) and buttermilk (chaas)

Czot is a popular soft bread of Kashmir prepared in tandoor (earth oven) and made of Atta flour. It is usually used as breakfast with salted butter and cinnamon tea. A real treat. During Ramzan or Ramadan it is the only bread that is baked. In Kashmir, the tradition is to served Czot with meat when happy events occur like marriage or new born baby.

VOUS AIMEREZ PEUT-ETRE AUSSI...
Dal (lentils)
Dhal, or Daal Dal is the name given to dishes of legumes, but it is also used to refer to legumes. Lentils and legu...
The most famous Indian Beverages
A selection of the most popular non-alcoholic beverages of India. Chai / Masala tea Let's start by the most ...
Indian Breakfasts
Breakfast in India is usually savoury and spicy. It's a full meal and often versatile, some dishes being suitable ...
Indian Desserts
Indian desserts, like the country itself, are colourful and infinitely varied. There are two kinds of desserts in I...
Indian Snacks
Indians love snacking and there are snack stalls on every street corner. Here are a few examples of the infinite va...
Main Courses
In India the main dish is usually a vegetable, meat, or pulse curry with rice and/or some form of bread. Rice is t...
← Side Dishes and Condiments
Indian Desserts →