Indians love snacking and there are snack stalls on every street corner. Here are a few examples of the infinite variety you can find. 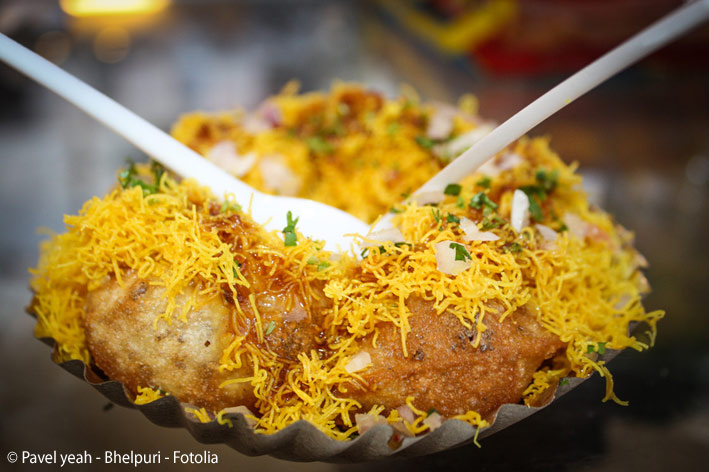 The chaat variants are all based on fried dough, with various other ingredients. 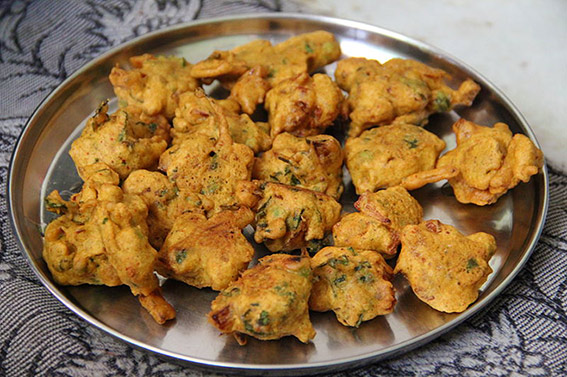 Pakoras are created by taking one or two ingredients, such as onion, eggplant, potato, spinach, plantain, paneer, cauliflower, tomato, or chili pepper and dipped in a batter of gram flour and then deep-fried.

Pakoras are usually served as snacks or appetisers complemented with tamarind chutney, brown sauce, or ketchup. 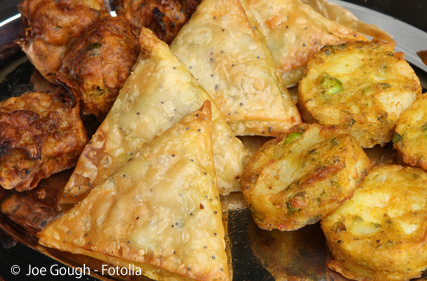 Samosa is a fried or baked pastry with a savoury filling, such as spiced potatoes, cheese, onions, peas, lentils.

Its size and consistency may vary, but typically it is distinctly triangular in shape.

Indian samosas are usually vegetarian, and often accompanied by a mint sauce or chutney. 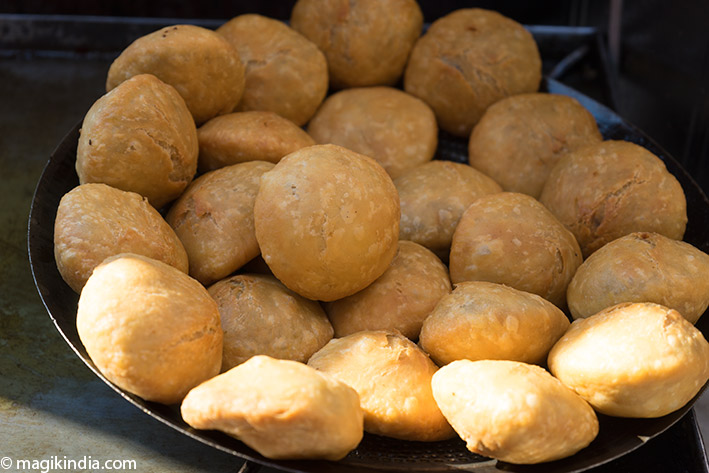 Kachori is a spicy snack popular in various parts of North India.

It is usually a round flattened ball made of fine flour filled with a stuffing of baked mixture of yellow moong dal or Urad Dal (crushed and washed horse beans), besan (crushed and washed gram flour), black pepper, red chili powder, salt and other spices.

Kachoris are often served with a chutney, often made from tamarind, mint, or coriander. 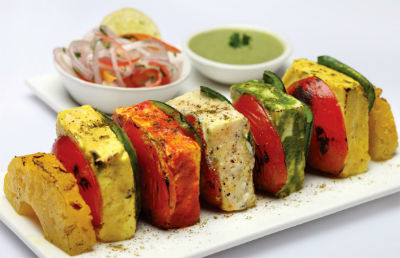 Paneer tikka is an Indian dish made from chunks of paneer (kind of cottage cheese) marinated in spices and grilled in a tandoor.

It is a vegetarian alternative to chicken tikka and other meat dishes.

It is a popular dish that is widely available in India. It is sometimes accompanied by salad and mint chutney. 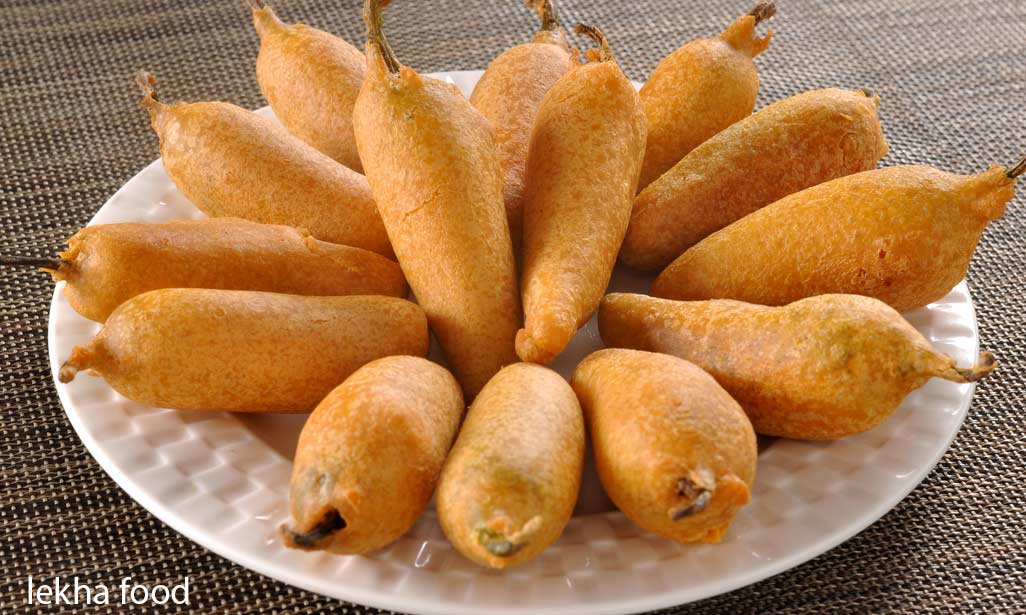 It served hot with tomato sauce or occasionally with mint and tamarind chutney. 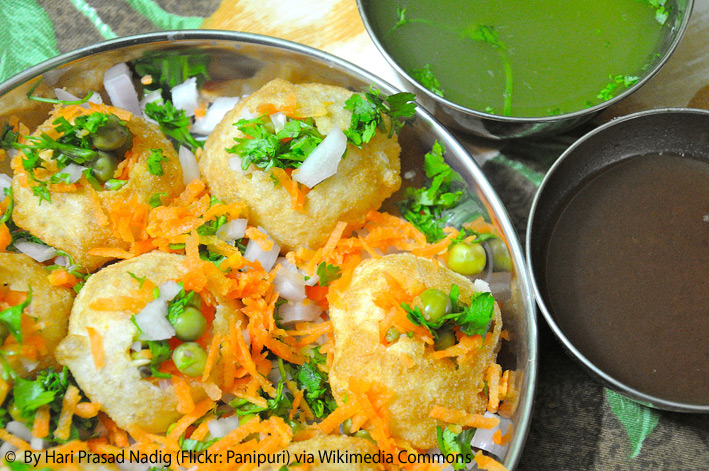 Panipuri is a famous street snack found in several regions of India.

The English meaning of Panipuri is “water bread”. It consists of a round, hollow puri, fried crisp and filled with a mixture of flavored water (pani), tamarind chutney, chili, chaat masala, potato, onion and chickpeas. 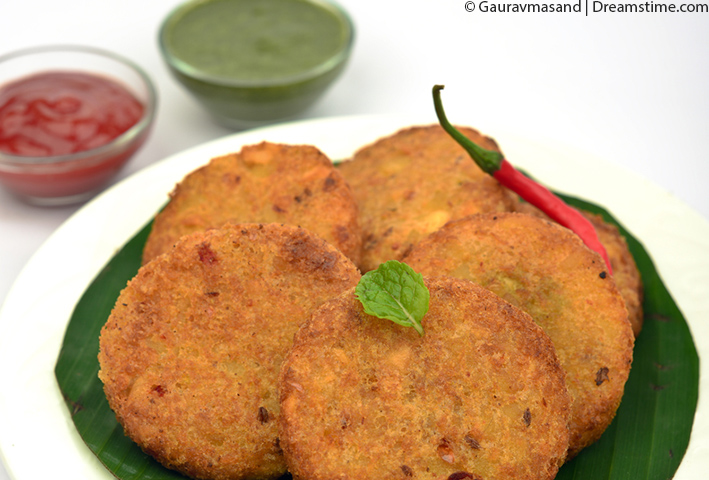 Cutlets are croquettes which is basically a serving of minced meat or vegetables, encased in breadcrumbs and potatoes, flattened into disks, and then deep-fried.

The croquette was originally a French invention that gained a world-wide popularity as a fast-food with the advent of burgers.

In India, it is known as “cutlets” or “aloo-tikkis”. They are served with ketchup or green chutney (coriander chutney). 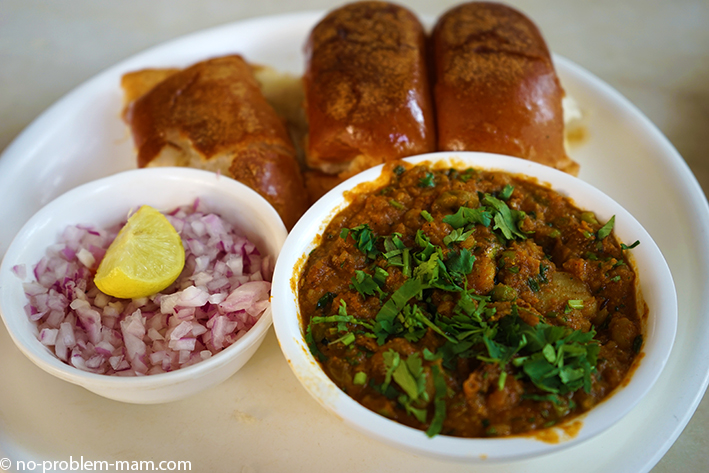 Pav bhaji is a fast food dish from Maharashtra, India, consisting of a spicy curry of mixed vegetables (bhaji) cooked in a special blend of spices and served with soft buttered pav (bread bun shallow fried in butter).

Pav bhaji is more than a mere snack, it’s a quick meal that can be grabbed on the go. 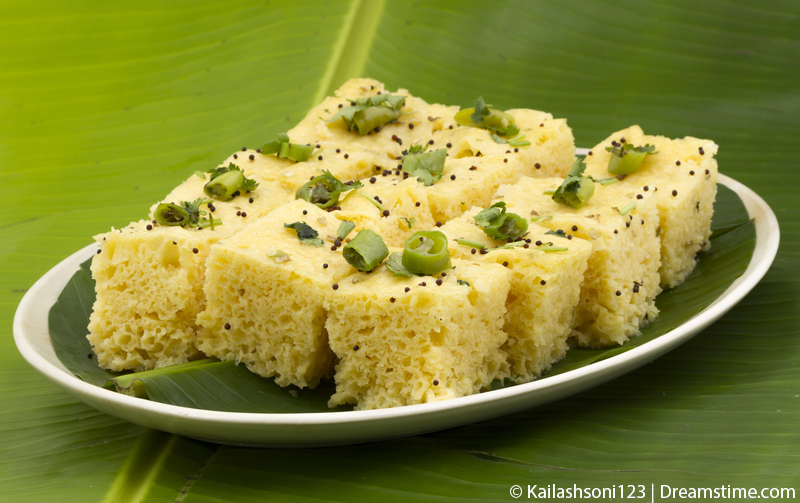 Dhokla originates from the Indian state of Gujarat. It is made with a fermented batter derived from rice and split chick peas.

Dhokla can be eaten for breakfast, as a main course, as a side dish, or as a snack. It is usually served with deep fried chillies and chutney made of coriander.

It is garnished with coriander and often with grated coconut. 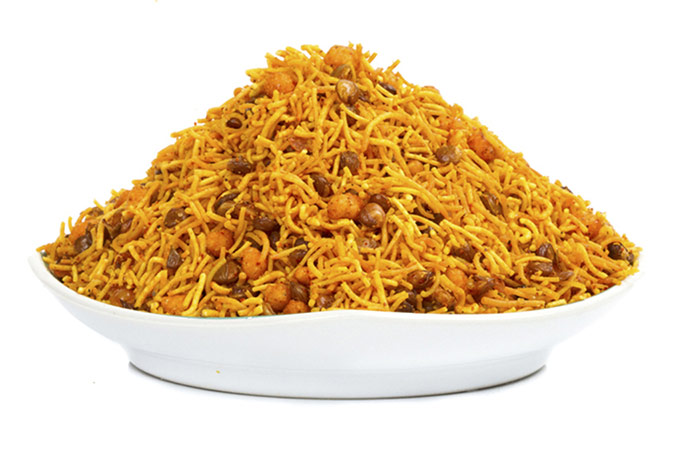 Namkeen is the Hindi word used to describe the savory flavor.

It is derived from the word Namak (meaning salt). Namkeen is also used as a generic term to describe savory snack foods.
Namkeens are usually a mixture of spicy dry ingredients. There is an infinite variety of them and are known by different names according to the states.

The namkeens are most often made from gram flour (besan) but also puffed rice, potatoes or legumes.

VOUS AIMEREZ PEUT-ETRE AUSSI...
Indian Spices
Indian food without herbs and spices is unimaginable. They are at the heart of every dish. They have been used sinc...
Indian Breakfasts
Breakfast in India is usually savoury and spicy. It's a full meal and often versatile, some dishes being suitable ...
The most famous Indian Beverages
A selection of the most popular non-alcoholic beverages of India. Chai / Masala tea Let's start by the most ...
Onam, the return to Earth of the king Mahabali
Onam is Kerala's biggest festival. It falls in the Hindu month of Chingam (August-September) and marks the return ...
Indian Breads
Most Indian breads are flatbreads, made without leavening and cooked on a flat or concave pan called a tava or frie...
12 good reasons to visit India
India still suffers from a bad reputation. Archaic, poor, dirty... Gandhi's country is fortunately not limited to ...
← Pancha Bhoota Sthalas, the five elements temples
Main Courses →

A glimpse of the mandore garden near Jodhpur 🙌

A glimpse of old Jodhpur, the blue city of Rajasth

The pandit of the Mandore gardens, Jodhpur #jodh