Bundi is one of those small Indian towns that have particular charm. It is an ancient city, dressed in blue like Jodhpur. Its many bazaars are an invitation to idle strolling and, like any town on a human scale, Bundi makes it easy to meet people. The royal palace stands majestically above the town, reminding us of the opulence of the Maharajas in the long-lost days when they rode down on elephants to the city and its narrow lanes. 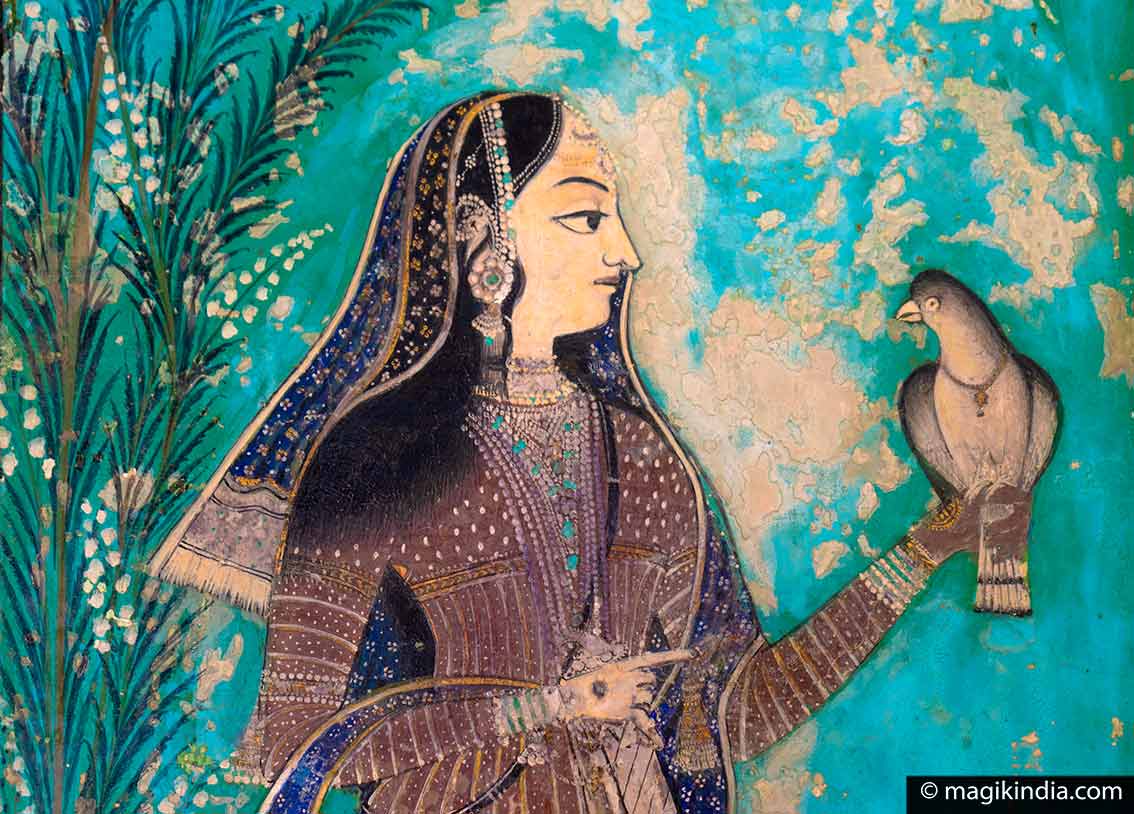 The town is named after a tribal chief called Bunda Meena. From the 14th century it was governed by the Hada Maharajas, who were Agnikula (descendants of the fire god Agni). This part of Rajasthan, Hadoti, is named after them.

Bundi is also one of the few places in India that can claim to have created a particular style of miniature painting. The Bundi school was active from the 17th to 19th centuries and the wall paintings in the royal palace are a wonderful reflection of the style.

Kajli Teej celebrations are dedicated to the Goddess Teej. This festival is significant for the married couples as they seek the blessings of the almighty for their happy married life and to replenish their ties.

The Kajli Teej festivities in Bundi starts on evening time and consist of a ceremonial procession through the main bazaars wherein the goddess is carried in a decorated palanquin. The procession has also decorated camels, bands and performing artists.

On seeing this imposing palace, one of the finest examples of Rajput architecture, it is easy to imagine its former glory.

This palace was built by Rao Raja Ratan Singh Hada between 1607 AD and 1631 AD. The whole palace is an aggregation of separate palaces built by later rulers. The Bundi royal family lived there until 1948.

Unfortunately, the palace is poorly maintained and bats now are the new inhabitants.

The few restored rooms though boast magnificent, brightly-coloured murals illustrating hunting scenes, processions, scenes from the life of Lord Krishna including a wonderful Chinese-inspired ceiling, divided into petal shapes and decorated with peacocks and hindoues divinities. All are the work of painters of the Bundi school.

A 20 minute walk from the palace will take you to the fort and a superb panoramic view.

The fort was constructed in 1354 upon a steep hillside. This colossal bastion is now abandoned. All that remain are a few fine murals here and stepwells. During its heyday, Taragarh Fort was renowned for its tunnels crisscrossing the entire hillside.

Bundi was previously called ‘Bunda-Ka-Nal’, ‘Nal’ meaning ‘narrow ways’. It is true that the colorful streets of the city and its houses with beautifully decorated porches are real gems for walkers and photographers.

Bundi, with its countless bazaars and markets, is a wonderful town to stroll around, from the palace to the old city gate and from Sadar Bazaar to Chomukha Bazaar (Chogan gate).

Each bazar has its specialty. The Indra Market, near the old city gate, is a lively place where you can find mainly clothing while at the Chudi bazaar, you’ll find ‘churias, the colorful Indian bangles.

Stepwells (baoris) are typical of Gujarat and Rajasthan. They served as reservoirs in dry times but also as places for the Maharaja and his court to hold festivities.

There are some 50 baoris in Bundi but only a few have withstood the ravages of time.

The Raniji-ki-Baori (“queen’s well”) is a magnificent example of baori art. It boasts some fine sculptures in different styles, Hindu (the 9 incarnations of the god Vishnu), Jain (torana arches) and Mughal.

Just beside the Raniji-ki-Baori is another stepwell, the symmetrically built Dhabhai Kund. It dates from the 17th century and is the second largest stepwell in India.

Other places of interest in the old town

We usually arrive in the town of Bundi by the road that bypasses the lake of Nawal Sagar, where a temple of Varuna is half submerged; well, in the Hindu religion, Varuna is the god of water and the celestial ocean as well as the underwater world.

It is said that the reflection of the entire city can be seen in the Nawal Sagar Lake. This feature makes it one of the unique attractions of Bundi.

Continuing towards the fort, in the Sada bazaar, to the left of the colorful statue of an elephant, you can discover the Jain Mahavir temple; its very simple exterior does not suggest an interior so refined, endowed with arcades with emerald green columns and several small sanctuaries. A good surprise !

Continuing in this same Bazaar, at the corner of two streets, the Charbhuja Krishna temple attracts attention with its colourful features. The interior of is also worth a look.

Wedged between two buildings and hidden by stalls, you could walk without noticing the Laxminath Ji temple close by the Charbhuja Krishna temple. It is, however, the oldest temple in Bundi, dedicated to Lakshmi, the goddess of prosperity.

The Maharaja’s summer residence stands on the edge of Jait Sagar lake, a few kilometres from the city centre.

There was once an underground corridor between it and the palace.

It does not have the same grandeur as the palace, and is best known for the fact that Rudyard Kipling stayed here and wrote a few pages of Kim here.

Worth noting are the memorial sati stones at the entrance to the tombs. Sati, the practice of widows sacrificing themselves on their husbands’ funeral pyres, was banned in 1829, but a few isolated cases continued long after. The practice was closely connected with the former social status of widows in India. When a woman’s husband died she was often reduced to begging or prostitution when his family throws her out of the home.

South of Bundi, there is a fine royal cenotaph, built in 1740 by the Maharaja of Bundi, Raja Rao Anirudh, in memory of his adoptive brother Deva.

It houses a shiva lingam under a painted cupola. The peculiarity of this memorial-temple is that it is supported by 84 octagonal pillars. Eighty-two of these pillars are visible, the last two are hidden … It’s up to you to find them …

A mile or two from the city is a peaceful village renowned for its potters, called kumbhakar.

Meeting the family of potters is a special treat; they love showing people the potter’s ancestral art, shaping the clay and hammering the pot to give it a wide, well-rounded body.

These 60m high waterfalls located 40 km from Bundi are worth the trip, especially after the monsoon. The country roads that lead you there are pleasant and the waterfalls and the surrounding nature offer a nice panorama. Stairs lead you to the foot of the waterfall where there is a charming temple dedicated to Lord Shiva. It said that the Pandavas brothers visited that place.

VOUS AIMEREZ PEUT-ETRE AUSSI...
The most beautiful palaces of India
India has an unrivalled heritage influenced by a history that is several millennia old; the palaces are ...
Jaipur, la ville rose, capitale du Rajasthan
Conçue selon des concepts védiques, Jaipur, la capitale bouillonnante du Rajasthan est l'une des villes les plus v...
Jaisalmer, the golden city of the Thar Desert
Jaisalmer is a diadem of gold and sand set gracefully down in the arid wastes of the Thar desert. The beauty of t...
Udaipur, the romantic city of lakes
Udaipur, city of lakes, an oasis in the arid wastes of Rajasthan, a sweet dream where majestic palaces are reflect...
Thar desert
“I have always loved the desert. One sits down on a desert sand dune, sees nothing, hears nothing. Yet through the...
Pushkar, the abode of lord Brahma
The city of the supreme god Brahma, spread out around its sacred lake, exudes the heady scent of spirituality that...
← Nageshwar, the Lord of Cobras
Kumbhalgarh Fort, the Great Wall of China →