Originally from the state of Bihar, in north-east India, the festival Chhath Puja celebrates and thanks Surya and Usha, the sun-god and the goddess of dawn, sources of life and primordial energy. This tribute to the sun comes just after the festival of lights (Diwali) in October-November and is the occasion of elaborate rituals dating back to ancient India.

“Surya is the soul, both mobile and immobile beings” (Rigveda)

It is believed that the Chhath ceremony dates back to the Vedic period, that is, between 3500 and 1500 BC; Rigveda, one of the four founding books of Hinduism contains hymns dedicated to the veneration of the sun.

It is also said that the Rishis (the ancient Indian sages, patriarchs of Vedism) were able to provide the necessary energy to the body directly from the sun’s rays and could thus abstain from food. 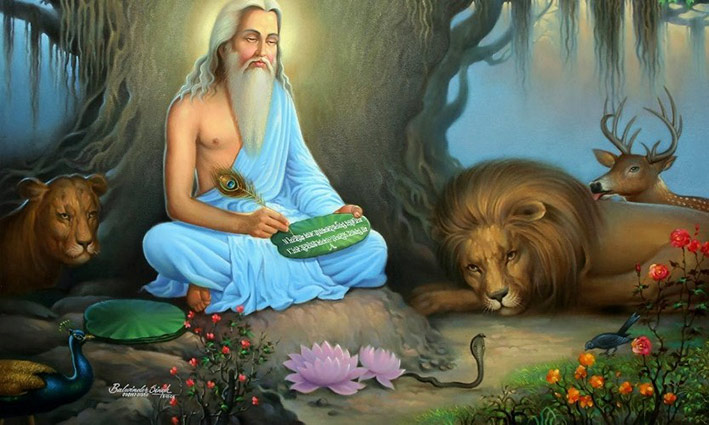 Some associate the ritual of Chhath with the god Rama and his wife Sita because they said they observed a fast and performed a ritual to the sun god to thank him for their return to their kingdom of Ayodhya, after 14 years of exile. From then on Chhath Puja became a traditional and significant festival of the Hindu religion and began to be celebrated every year in the homeland of Sita, the present state of Janakpur, and in neighboring Indian states like Bihar. 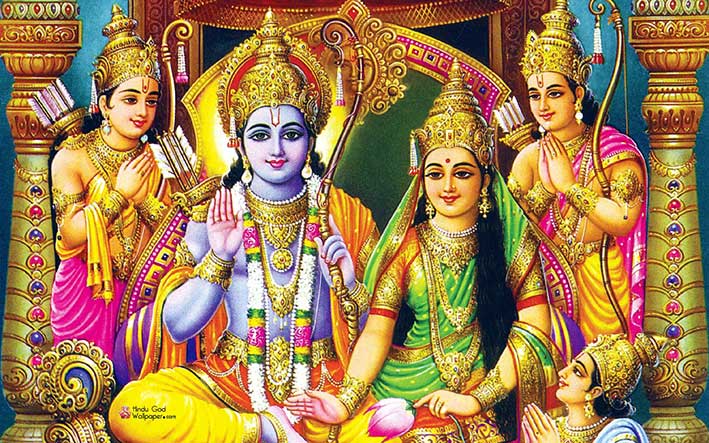 Surya is the sun god of Hinduism, the creator of the material universe (Prakriti). In Hindu mythology, he is the father of Manu, the first man on earth and the legislator of humanity, but also of Yama, the god of death and Yami who will become, after his death, the Yamuna River, a of the seven sacred rivers of Hinduism. 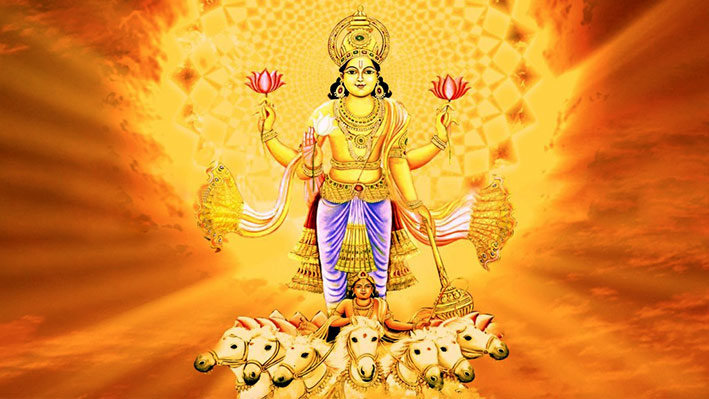 The sun god is usually depicted holding a lotus flower in both hands, standing on a chariot pulled by seven horses.

The importance of worship to the sun god is illustrated in many Indian festivals like Uttarayan (when the sun goes to the north) or Pongal (the harvest festival). He also expresses himself through the practice of yoga: the sun salutation (Surya Namaskar) which consists of 12 different postures is a technique of gratitude towards the sun. 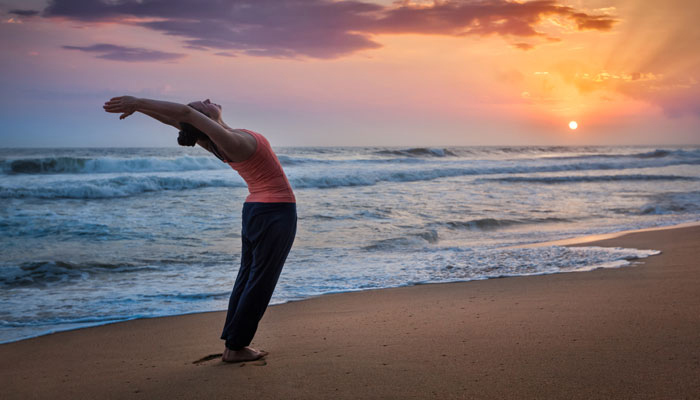 Indian rulers anxious to perpetuate the worship in Surya, have built majestic sanctuaries dedicated to the solar deity: the temples of Modhera in Gujarat and Konark in the Odisha are the best examples. These architectural wonders have been scientifically designed so that during solstices, the first rays of the sun fall directly on the idol of Surya. 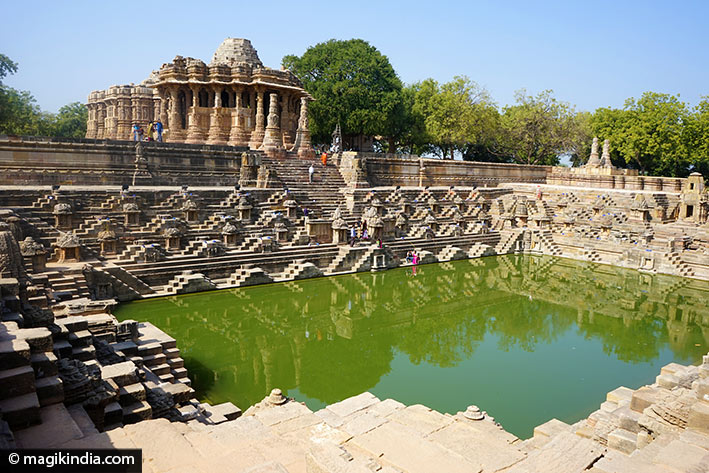 Usha literally means ‘the first ray of morning sun’; symbolically, Usha is the dawn of divine consciousness for the spiritual aspirant. Usha is venerated on the last day of the Chhath festival (see below).

A festival of austerities

The rituals of the festival are rigorous: everything begins with scrupulous cleaning of the house before the rituals begin. Adepts fast from morning until evening while abstaining some days of water. The ritual requires standing in the water for long hours, offering food offerings and prayers at sunrise and sunset. Some worshipers also prostrate towards the banks of the river. During this period, the worshiper must remain pure; he sleeps on the floor separated from his spouse. 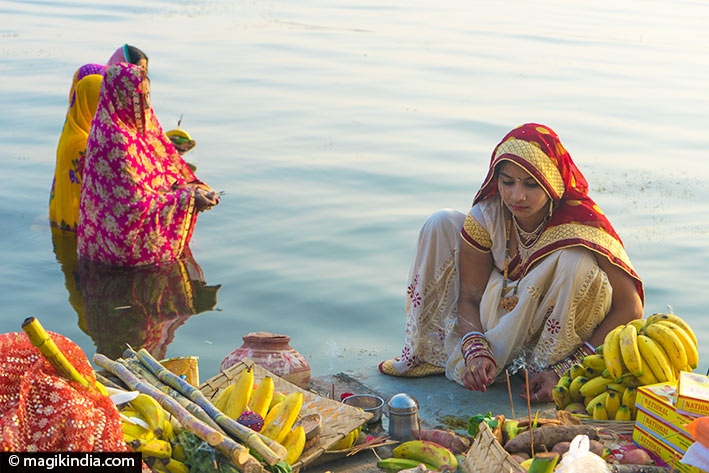 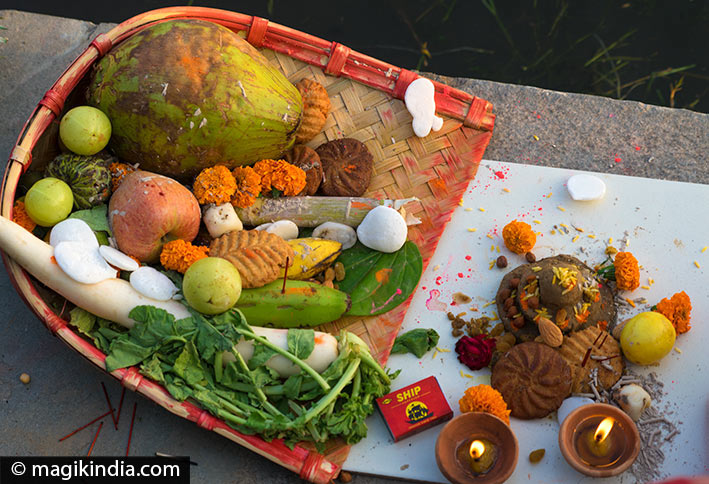 The festival is held for four days in October-November but also in March-April (Chaitra Shasthi) after Holi, the festival of colors. It is mainly celebrated in the state of Bihar but also in Jharkhand, Uttar Pradesh, Chhattisgarh and some states of northwestern India such as Gujarat or Rajasthan. 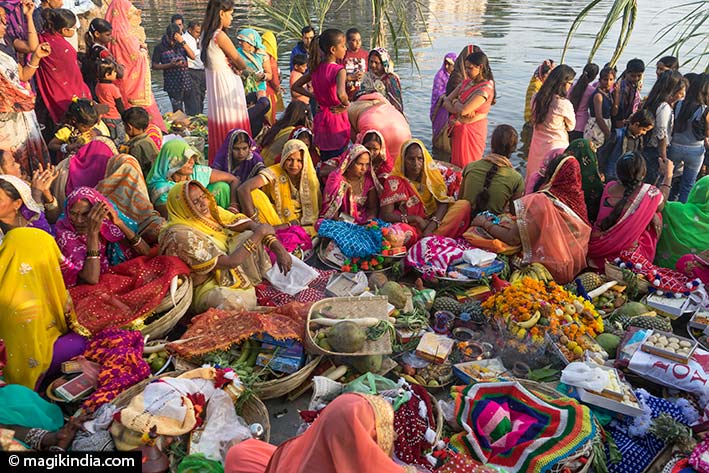 The faithful gather on the banks of a sacred river (preferably the Ganges) or otherwise from another water point and make their offerings in the sun.
The worship aims to thank the sun for its benefits but is also supposed to help heal a variety of diseases as well as pray for the longevity and prosperity of family members.

The ‘worshipers’, called ‘Parvaitin’ (Sanskrit ‘parv’ meaning festival), are mostly ‘worshipers’ because in India it is usually women who fast and pray for the well-being of their family. The ladies wear beautiful colorful saris and affix a long orange vertical line from the forehead to the tip of the nose. This tilak symbolizes Surya. Men are content with white clothes. 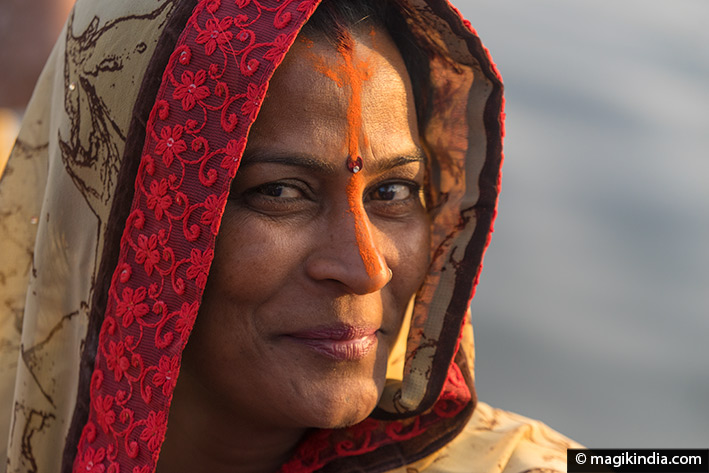 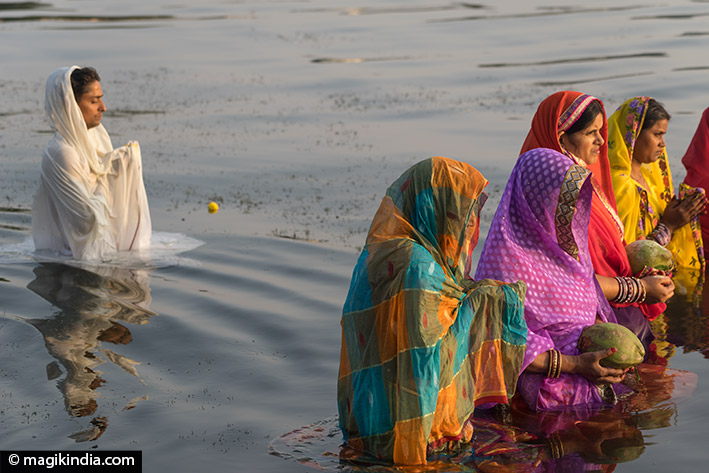 On the first day of Chhath Puja, followers take a bath in the sacred river and bring home the holy water to prepare the offerings. The women observe a fast called ‘vratin’ which consists of taking only one meal during the day. 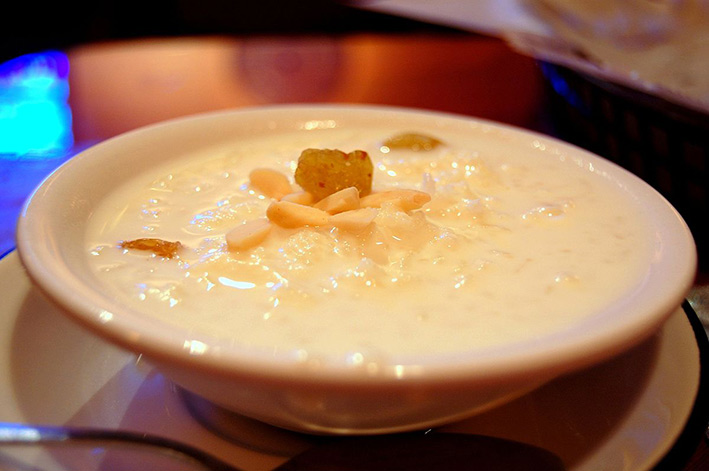 On the second day of Chhath Puja, followers adhere to a fast all day long. In the evening, after making offerings to the rising moon, they break the fast with kheer (Indian milk rice) and chapatis (Indian flatbread). 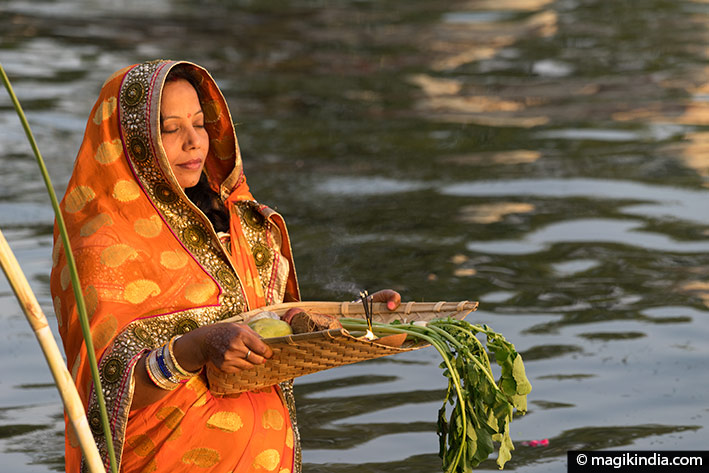 This day is the culmination of the festivities. The devotees observe a ‘nirjal vrat’ ie a fast with abstinence of water. They prepare baskets of offerings (arghya) and go to the banks of the river at sunset to offer them to Surya. 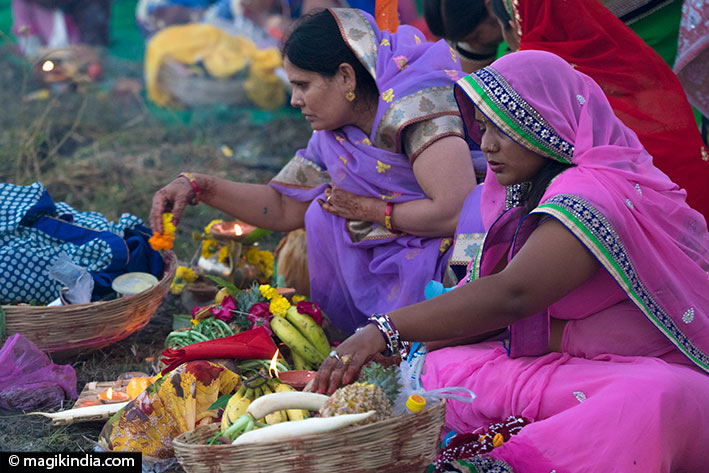 On the last day of Chhath Puja, the faithful, with their family and friends, go to the riverbank before sunrise, to make offerings (arghya) at sunrise. The rising sun dispels the darkness and symbolizes the emergence of knowledge and life.
The festival ends with the breaking of the fast by the valiant ones. Friends and relatives visit the homes of devotees to receive prasad (holy food).

Vous aimerez aussi...
Jodhpur, the blue city of Rajasthan
Overlooked by its imposing fort (called "the magnificent"), the blue city makes the most of its heritage with a nu...
Ganesha Chaturthi, the birth of the elephant-headed god
Ganesha Chaturthi is one of the main Hindu festivals. It celebrates the birth of Ganesh, the famous elephant-headed...
16 must-see places in Rajasthan, north-west India
Rajasthan state is in northwest India, on the Pakistan border. This is the India of picture postcards, very popula...
Facebook
Twitter
Print
E-mail
Thanks for Sharing ! Merci !
🙂
← Diwali, the festival of lights of India
Pushkar Camel Fair →

Sun temple in Gwalior (replica of Konark one) . .

I think I have a dozen of different portraits of t

On the road to Leh... Once you have seen the Himal

Varanasi is a feeling... The city of Shiva speaks