Diu is a charming small town on the coast, decked with blue-and-white fronted baroque churches, reminding us that a few hundred years ago Portuguese caravels moored nearby.

Diu is a former Portuguese trading post on a small island (40km2 ) just off the west coast of the Gulf of Cambay.

In 1535 Bahadur Shah, Sultan of Gujarat, concluded a defensive alliance with the Portuguese against the Mughal emperor Humayun. He offered Diu to the Portuguese in return for their military help. The Portuguese built a fortress there and established a garrison. The Shah regretted his generosity and tried several times to reconquer Diu, but in vain.

Diu remained under Portuguese control from 1535 to 1961, when it was handed over to the Union of India under Nehru.

Zampa Gateway is the main entrance to the old town of Diu. One can’t fail to be intrigued by this gate built of astonishingly red brick. It is decorated with a statue of a priest, carved lions and tribal patterns. It even incorporates an 18th century chapel!

Diu Fort was built by the Portuguese in 1535, in exchange for their military assistance to the Sultan of Gujarat against the Mughal emperor Humayun.

The Portuguese had long wanted to land on the island to expand their trade and had already tried three times to take the island by force, without success.

The fort is an imposing structure on the coast of Diu Island. It enjoys a magnificent view of the sea.

Fortim do Mar also known as the Fortress of Panikota, is a former Diu Jail.

Built by the Portuguese, it is a mile within the ocean from the shore and has a light house and a small chapel dedicated to the lady of sea.

Its structure shaped up in the form of a ship is connected to land through a mysterious tunnel inside it through its basement as an alternative during emergency exit.

It can be reached by boat.

Saint-Paul Church is located in the town of Diu. This is the largest and is most renowned church on Diu and considered one of the best examples of baroque architecture.

It was founded by the Jesuits in 1600 and rebuilt in 1807; it is still in use. The interior of the church is decorated with intricately carved wood work that is considered one of the most elaborate in any Portuguese church in India.

The front elevation or facade of the church is also said to be one of the most detailed in India.

Saint-Thomas church is situated on an elevated platform. It has been converted into a museum which houses antique statues, various stone inscriptions of the earlier rulers, wooden carvings and idols.

The construction of the church is designed in Gothic style architecture.

The white washed exterior of the building still bears the faded portraits and paintings of the Portuguese period.

The Church of St. Francis of Assisi was built in 1593, and is the first of the three churches built in Diu.

Located on the hilltop overlooking a plateau, the layout plan of the church replicates similar churches built in Europe.

It has now been converted into a dispensary. 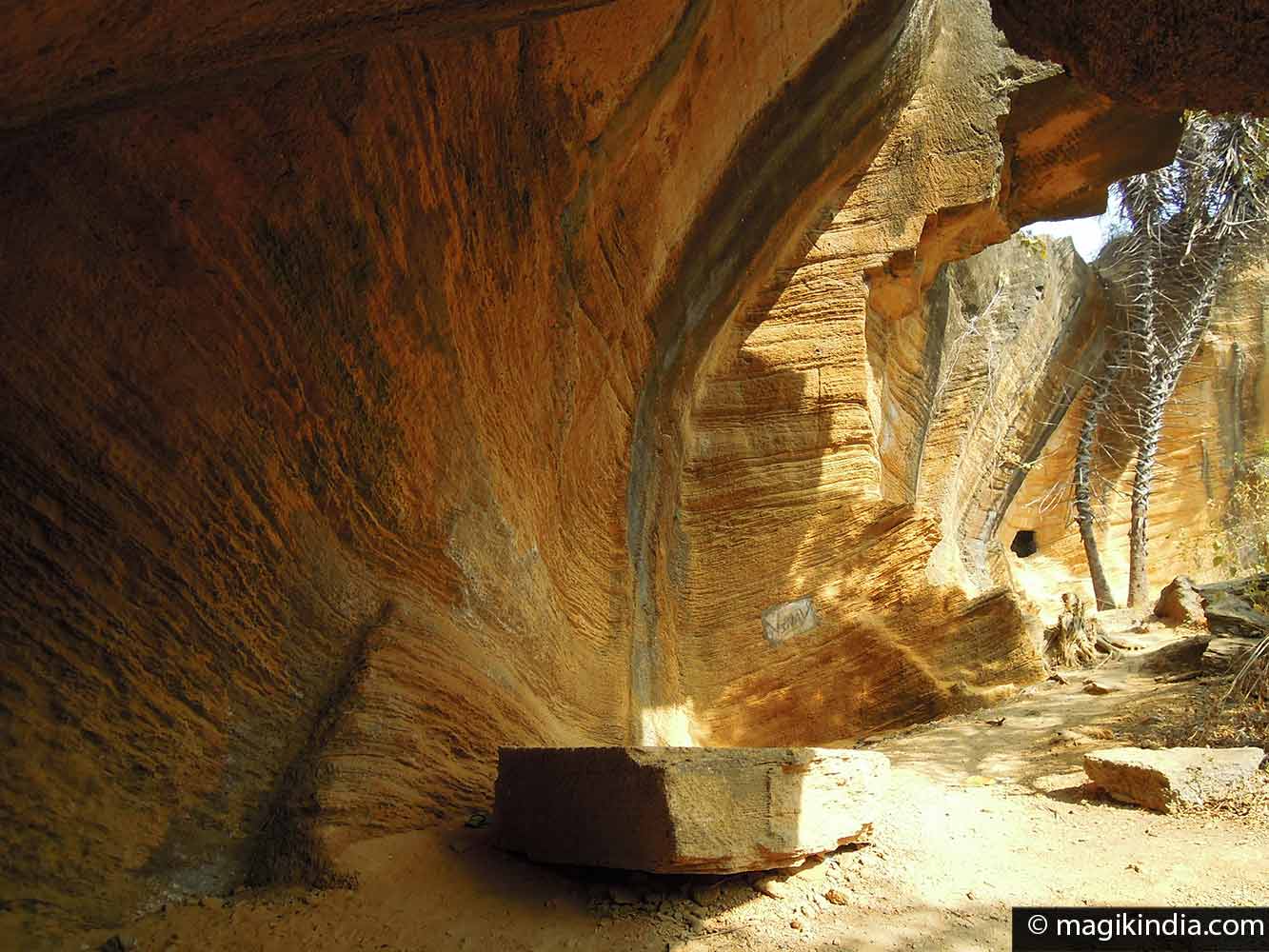 Outside the town walls are the Naida caves, a network of 11 caves where the Portuguese quarried stone for their buildings. 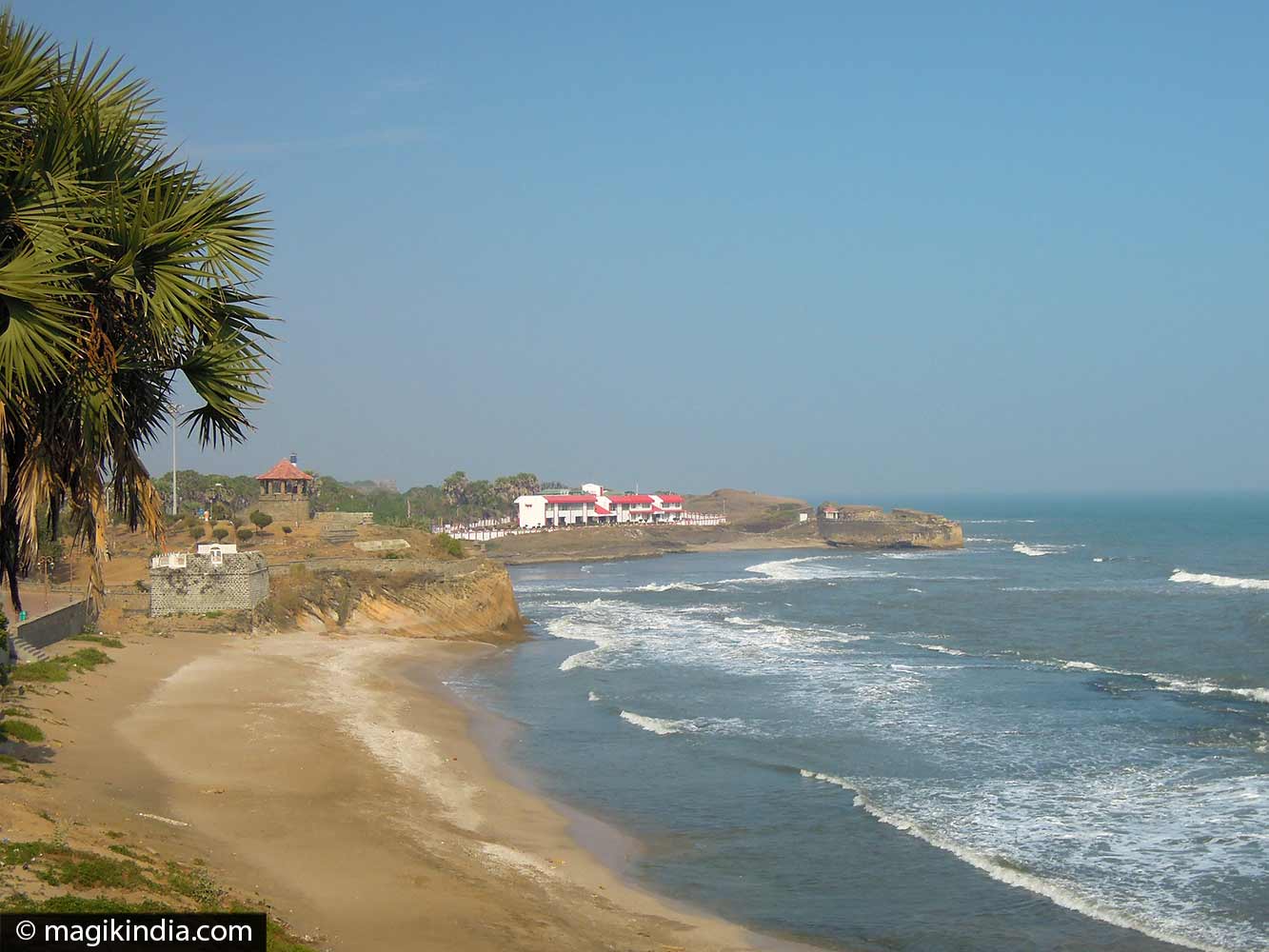 Nagoa beach is busier and attracts more tourists; it is mostly to this beach that Indian families come to spend the day and picnic.This beach also offers various water sports facilities like parasailing. 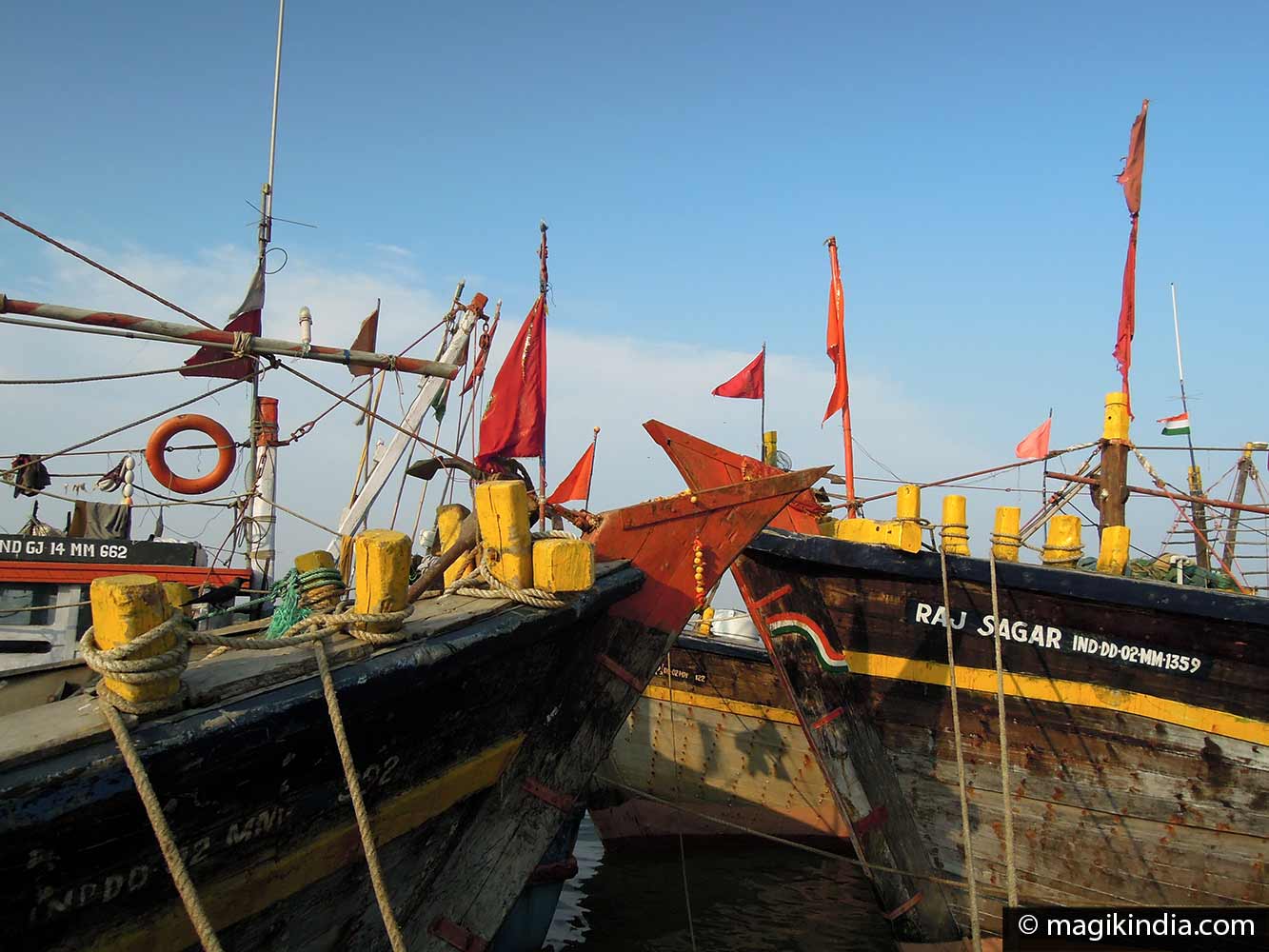 Vanakbara is absolutely worth a look. It is a lovely little fishing village with colourful boats and buzzling activity. It is best to be there in the morning when the boats returns and sells off their catch.

Gangeshwar is an adorable sanctuary in the village of Fudam, 3km from Diu. My favourite place in Diu! This seaside temple to Shiva features five Shiva Lingams battered by the waves as if in a puja (ritual) performed by Mother Nature herself.

It is believed that these lingas were built by the five Panadava brothers of the famous epic Mahabharata.

A unique and peaceful place. A must.

VOUS AIMEREZ PEUT-ETRE AUSSI...
Mandvi, the sea at the end of the Kutch journey
Mandvi is a charming coastal town about sixty kilometers from Bhuj, the capital of the Kutch region in Gujarat. Th...
Mahuva, an oasis in Gujarat
Mahuva is a small town by the Gulf of Khambhat, 95km from Bhavnagar. It is appreciated for its mild climate and lu...
Than Jagir, the monastery of Kanphata yogis
Than Jagir, set at the foot of the volcanic hills of Dhinodhar (Kutch, Gujarat), is one of those places in India t...
Ahmedabad, the city of 'pols', Gujarat
Ahmedabad ("Ahmed's City”), boasts a rich heritage from its past as a merchant city. The old town and its many pol...
Champaner-Pavagadh, the ancient capital of Gujarat
Champaner is a unique place, way out in the countryside, where you'll find the vestiges of a town that was the cap...
Mount Girnar, the sacred mountain of Gujarat
Mount Girnar is an undisputed must-see while you're in Gujarat. Climbing the 9999 steps to its summit leaves an i...
← Mahuva, an oasis in Gujarat
Somnath, the Lord of the moon →