The most sacred Hindu pilgrimages of India

In a pious country like India, the pilgrimage is one of the pillars of the faith.There are tens of thousands of pilgrimage centres in India but some of them are the most sacred and every believer makes at least one of the subcontinent’s major pilgrimages in his or her lifetime.

Amarnath, the pilgrimage of the ice lingam

Lors During the month of Shravan (July-August), tens of thousands of Hindus undertake an arduous 50km pilgrimage through the Himalayas to worship a very special symbol of Shiva: an ice lingam that forms each year in a cave at the end of the Lidder Valley in Kashmir…

Kumbh Mela, the biggest pilgrimage in the world

The name Kumbha Mela means “festival of the jar”. It is probably the world’s biggest pilgrimage; gathering up to 100 million people in one place, to bathe in the sacred waters of four holy cities.The belief is that it opens the door to moksha (liberation) and spiritual awakening. A surprising and spectacular event that leaves no visitor unmoved, whether they are believers or not…

Jyotir-Lingams, the 12 lingams of light

The lingam is the symbol of the Hindu god Shiva. There are numerous lingams throughout India, but the twelve Jyotirlingams or ‘lingams of light’ are the holiest and most worshipped of all. Jyotimeans ‘light’ and lingam means ‘mark’ or ‘sign’. According to Hindu tradition, the Jyotirlingams pilgrimage washed off bad karma and makes the soul and body pure… 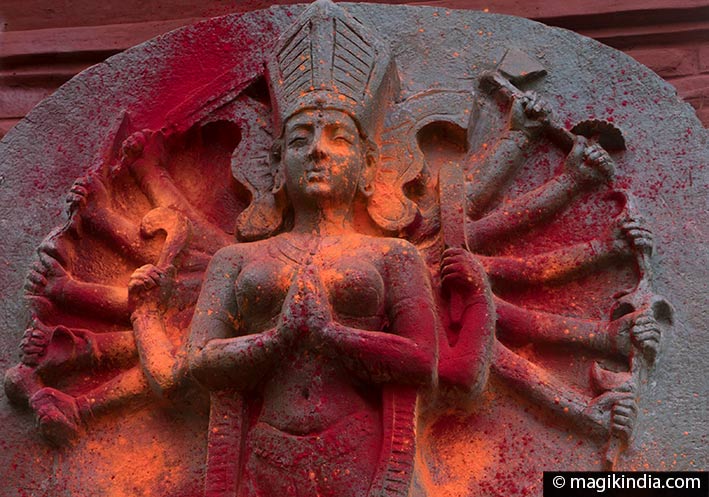 Shakti means ‘power’ or ‘energy’. It is a fundamental concept in Hinduism, which is often associated with the feminine principal and personified by Devi, Hinduism’s primordial goddess. The Shakti is venerated all over India and devotion culminates during the 9-day festival of Navaratri…

To Hindus, the Sapta Puris are the seven holiest cities in India. Sapta means ‘seven’ and puri means ‘town’. These seven holy cities are also called the Sapta Moksha Puris, the ‘seven cities of liberation’ or the Sapta Tirtha, ‘seven places of pilgrimage’. It is generally believed that visiting these cities puts an end to the cycle of deaths and rebirths (reincarnation) and brings about moksha, ‘liberation’…

Char Dham, meaning ‘four abodes’, is the pilgrimage circuit around the four most revered pilgrimage sites in all India. Hindus believe that a pilgrimage or yatra around the Char Dham cities opens the way to moksha, liberation from the cycle of deaths and rebirths. They also think that every believer should try to visit each of these places at least once in their life…

Over time, another Char Dham pilgrimage circuit has developed, in Uttarakhand state in North India. It is known as ‘Chota Char Dham’, ‘the four small abodes’ or ‘Himalayan Char Dham’. There are: Yamunotri, Gangotri, Kedarnath and Badrinath.

The “Pancha Bhoota Sthalas” refers to the five temples dedicated to the Hindu god Shiva, each of these temples representing the five prime elements of nature; water, air, ether, fire and earth. “Pancha” means five, “Bhoota”, elements and “Sthalas”, place. These temples are all located in the South of India, four in Tamil Nadu and Andhra Pradesh…


Vous aimerez aussi...
The most popular religious festivals of India
India is a pious country and religion plays an important part in the lives of most Indians. Ritual and worship are...
Navaratri festival in Tamil Nadu
In Tamil Nadu, the nine-day Navaratri festival honoring the Shakti or universal primordial force, is celebrated in ...
Sapta Puri, the seven holiest cities in India
To Hindus, the Sapta Puris are the seven holiest cities in India. Sapta means 'seven' and puri means 'town'. These...
← Cultural festivals not to be missed in India
Buddhist pilgrimages in India →

3 Comments on “The most sacred Hindu pilgrimages of India”