Rajasthan state is in northwest India, on the Pakistan border. This is the India of picture postcards, very popular with tourists and wonderfully colourful, from the pink of Jaipur to the blue of Jodhpur and the gold of Jaisalmer. Bounded by the Thar Desert in the northwest and crossed by the Aravalli hills, this “land of kings” will leave you with sweet memories of romantic palaces, gipsy nights and waking among sand dunes with the first rays of the sun caressing your cheek.

Rajasthan’s bustling capital, designed according to Vedic concepts, has a lot to offer. From the “palace of winds” to the “floating palace”, the pink city has no rival except neighbouring Amber, the Jaipur Maharajas’ previous capital…

Bundi is one of those small Indian towns that have particular charm. It is an old city, dressed in blue like Jodhpur. Its many bazaars are an invitation to idle strolling and, like any town on a human scale, Bundi makes it easy to meet people. The royal palace stands majestically above the town, reminding us of the opulence of the Maharajas in the long-lost days when the king and his court rode down on elephants to the city and its narrow lanes…

The story of Chittorgarh (or Chittor) fort is steeped in heroism and the pride of the Rajputs. It stands as a symbol of courage and sacrifice. This “city of strength and devotion” as it is sometimes called fits that description well : Chittor has known many battles but the echo of the poetess Mirabai’s songs of divine love can still be heard…

Udaipur, city of lakes, is an oasis in the arid wastes of Rajasthan, a sweet dream where majestic palaces are reflected in sparkling water. Yes, Udaipur is certainly one of India’s most romantic towns…

India’s Great Wall of China! On the road to Jodhpur, 80km from Udaipur, an imposing construction stands on a hilltop 1100m above sea level. This is Kumbhalgarh fort, a World Heritage site. Its boundary wall, extending over 36km, is the second-longest continuous wall in the world after China’s Great Wall…

On the road between Udaipur and Jodhpur, tucked away in a magnificent valley in the Avaralli hills, there stands a gem of architectural virtuosity: the Jain temple of Chaturmukha, one of the largest and finest Jain temples in India and an architectural marvel…

This corner of paradise on earth is the only hill station in Rajasthan. Not only is it blessed with lush landscapes, it also boasts numerous fascinating temples with age-old legends…

Overlooked by its imposing fort (called “the magnificent”), the blue city makes the most of its heritage with a number of top rank cultural festivals. The stunning landscapes of the Thar desert all around and the busy streets of the colourful old town will bring you back to Jodhpur again and again…

Gateway to the Thar desert, this small hamlet takes us back in time to the days when camel trains trudged endlessly along silk road. Osian (oasis) was known in ancient times as a Vedic centre and in the days of the Gupta kings (320-550 CE) as an important halt for caravans on the silk road. It became a prosperous trading city under the Gurjar Pratihar dynasty (7th-11th centuries). It was also an important centre for the Jain faith in the 8th to 12th centuries…

The town of Nagaur, halfway between Jodhpur and Bikaner, is clustered around the Ahhichatragarh, a massive fortress that has seen many a battle in its time but is now devoted to culture…

Jaisalmer is a diadem of gold and sand set gracefully down in the arid wastes of the Thar desert. The beauty of this honey-coloured city is matched only by the luminous desert all around it, where camel caravans laden with precious goods once tramped across the dunes…

Barmer is a city in the Thar Desert located in the West of Rajasthan. Unlike most of the other parts of this state, it has been spared from mass tourism and it will delight visitors in search of authenticity and especially photography lovers. In the streets and bazaars of the city, you will encounter characters who seem straight out of an old Bollywood movie!

Bikaner is a place apart. It is not yet touristy but it holds some wonderful surprises. The magnificent fort should make the one in Jodhpur green with envy and the old town is absolutely enchanting; it’s envelops you in a whirlwind of colours and fragrances…

Organised tours often bypass the Shekhawati region in northwest Rajasthan, yet in the 18th and 19th centuries it was one of Rajasthan’s richest regions. Wealthy Marwari merchants built huge mansions there, decorated inside and out with sumptuous frescoes in which Hindu mythology mingles with scenes from daily life. These masterpieces have earned the region a reputation as Rajasthan’s open-air art gallery…

The city of the supreme god Brahma, spread out around its sacred lake, exudes the heady scent of spirituality that emanates from all leading pilgrimage centres. In October the peaceful town comes alive as pilgrims and camel drivers gather in their thousands for the Pushkar Fair… 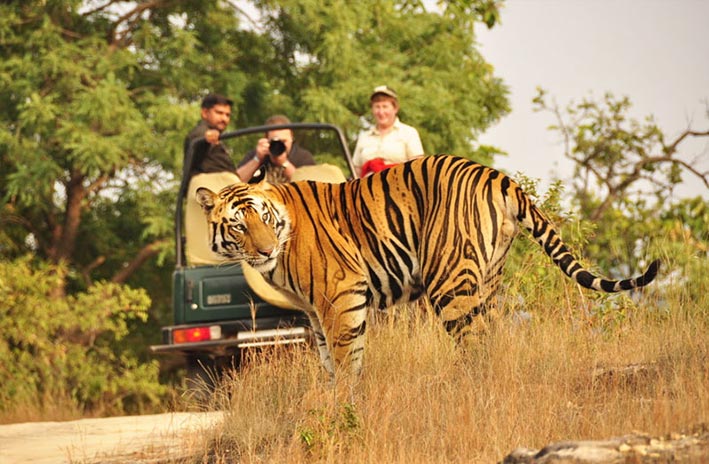 Ranthambore National Park is one of the biggest and most renowned national park in Northern India. The park is located in the Sawai Madhopur district of southeastern Rajasthan, which is about 130 km from Jaipur. Being considered as one of the famous and former hunting grounds of the Maharajas of Jaipur, today the Ranthambore National Park terrain is major wildlife tourist attraction spot that has pulled the attention of many wildlife photographers and lovers in this destination.


Vous aimerez aussi...
The most beautiful palaces of India
India has an unrivalled heritage influenced by a history that is several millennia old; the palaces are ...
Chhath Puja, thanksgiving to the Sun God
Originally from the state of Bihar, in north-east India, the festival Chhath Puja celebrates and thanks Surya and ...
Sarneshwar Mahadev, the temple-fort of Sirohi
Sirohi is a small city located in the south of Rajasthan two hours from Udaipur, the romantic city of lakes. It wa...
← Pushkar, the abode of lord Brahma
15 lieux incontournables au Rajasthan, India →