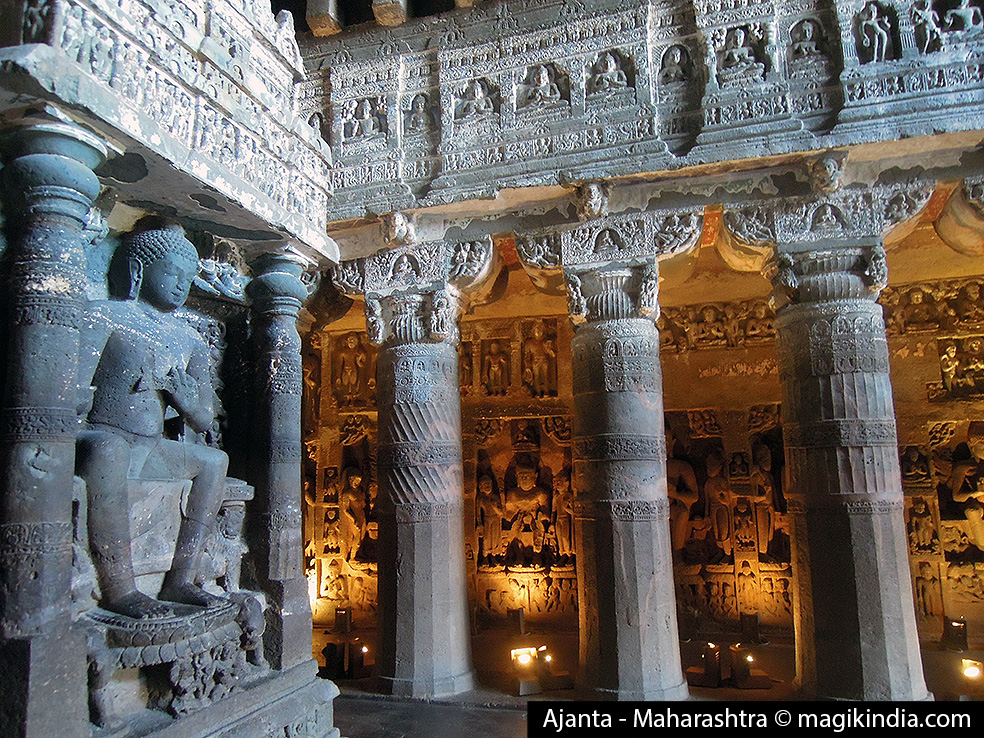 From caves, temples and mosques to palaces and stupas, India boasts an architectural diversity like no other country in the world. This incredibly rich heritage has developed over nearly 4000 years, during which time India absorbed many different political, religious and artistic influences.

India’s very earliest towns were built in the Indus valley, where one of the world’s oldest urban civilizations flourished between 2700 and 1700 BCE – contemporary with the cities of Mesopotamia and ancient Egypt. The Indus valley civilisation is known from archaeological excavations of its brick-built cities with draining systems and hot baths, which made it one of the most advanced cultures of its time. 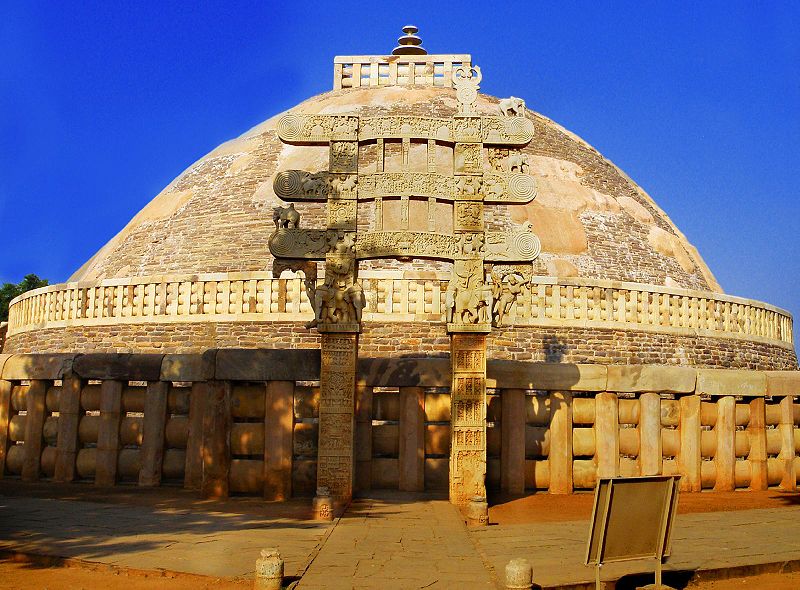 The oldest extant architecture in India dates from the emergence of Buddhism in the 3rd century BCE. 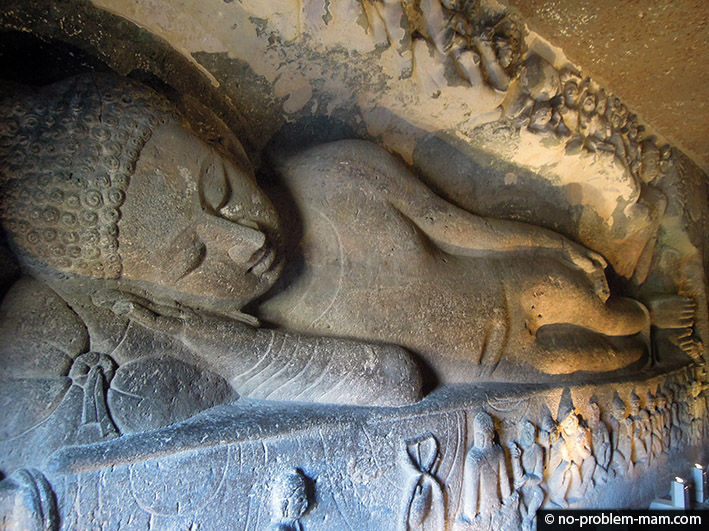 From the beginning of the Common Era to the start of the Gupta dynasty in 320 CE, Indian art underwent changes that conditioned all its future evolution.

During this period representation of the Buddha underwent further transformation, reached its peak under the Gupta dynasty (4th-6th centuries CE) and influenced Brahmanic and Jain statuary. 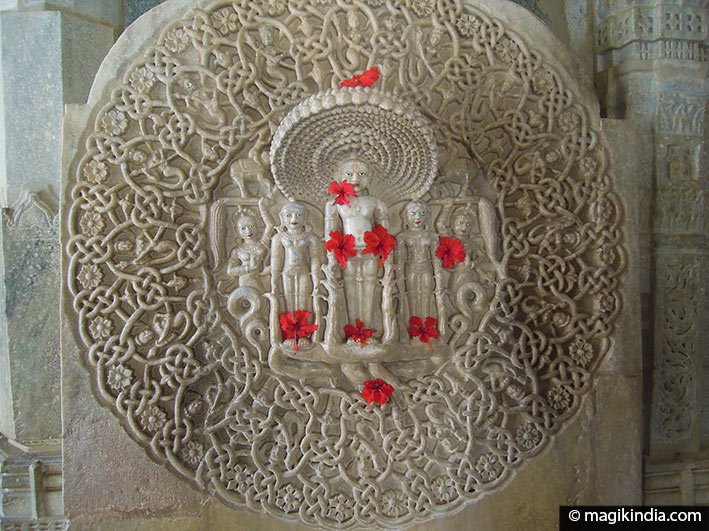 The saints or tirthankara of the Jain religion began to be represented like the Buddha, either standing or sitting in the lotus position, whereas in Hindu statuary standing figures are shown in the famous triple bend or tribhanga posture that gives the body a sensual S curve.

The introduction of human figures in Buddhist, Jain and Hindu art meant that buildings were required to shelter the statues. The Indian temple was born.

Starting with the reign of Chandragupta in 320 CE, the classical period includes Gupta art (4th-5th centuries) and post-Gupta art (5th century to roughly mid-8th) by schools that followed the Gupta tradition. The main post-Gupta school was the Badami Chalukya school and its remarkable complexes at Aihole, Badami and Pattadakal. 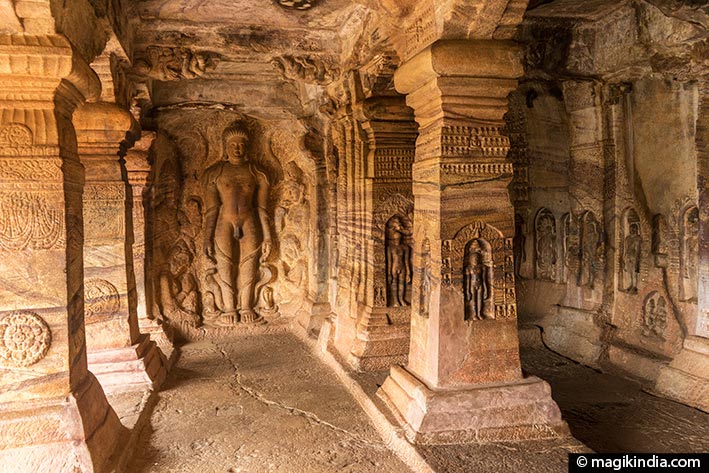 Throughout this period Buddhism was on the decline, Hinduism was expanding and the worship of anthropomorphic idols was becoming widespread.

There was also a revival of rock-cut architecture during this period with some brilliant Hindu and Jain work at the Ellora, Ajanta and Elephanta caves in the Post-Gupta years.

At the end of the 8th century a number of regional styles emerged in Indian art, each with a strong character of its own. Broadly speaking, temple art and architecture shows a contrast between the schools of north and central India and the Dravidian style of the south.

In South India, architecture thrived with the creation of Hindu kingdoms there.

An original style flourished in 7th- and 8th-century Tamil Nadu under the Pallava kings. This was a favourable period for all the arts – music, painting, literature and architecture. Stone-built temples replaced those carved out of solid rock, as can be seen at Kanchipuram and Mahabalipuram. 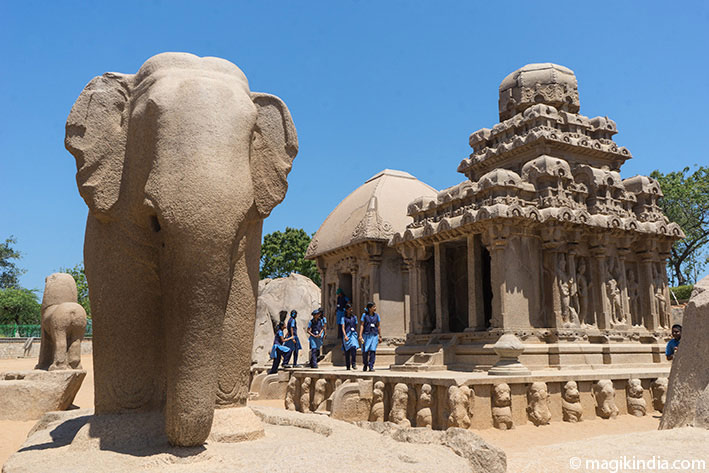 The art, music and literature of Tamil Nadu reached new heights under the Chola kings. The magnificent Shiva temple in Thanjavur, completed around 1009, and Airavatesvara temple in Darasuram are the period’s finest architectural achievements. 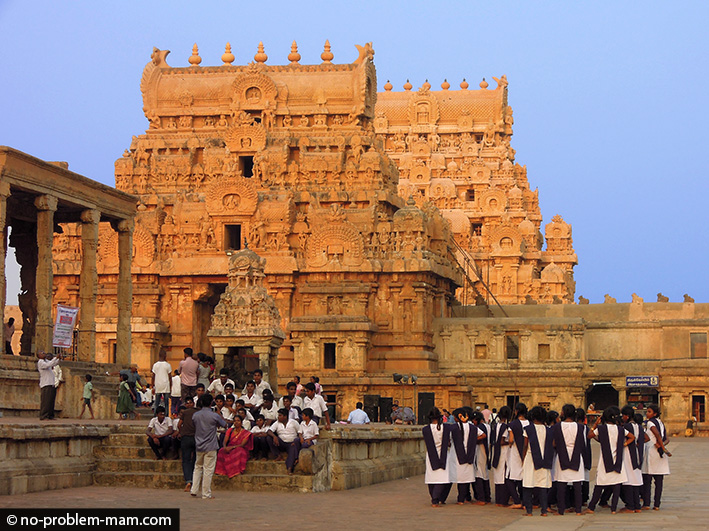 The Western Ganga dynasty in Karnataka also left its mark with the famous 10th-century Jain monument at Shravanabelagola. 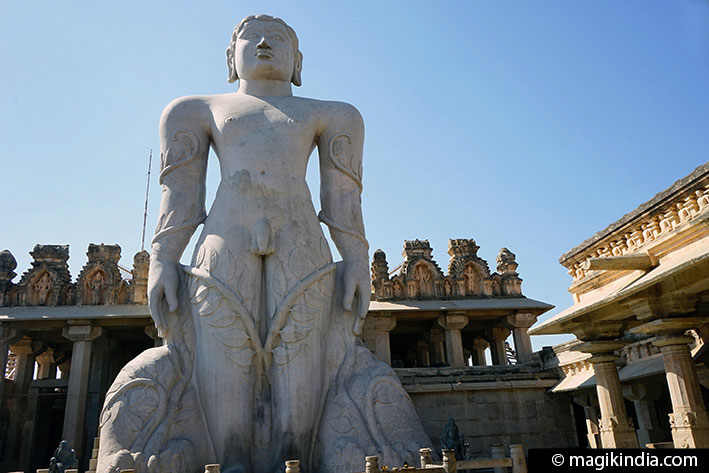 The Hoysala Empire that ruled over Karnataka from the 10th century to the 14th brought new developments to South India’s architecture. The Hoysala architectural style is called Karnata Dravida as distinct from the traditional Dravida idiom. One of its characteristics is the intricate detail of the lathe-turned pillars and the figures and decorations carved from schist. The temples at Belur, Halebidu and Somnathpur are all marvellous examples. 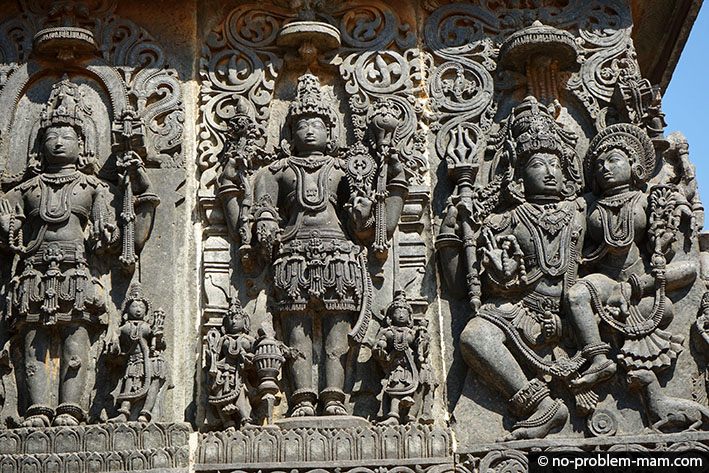 The Vijayanagar Empire was ruled by a South Indian dynasty based in the Deccan. It is named after its capital city Vijayanagar whose remarkable ruins surround the present-day village of Hampi in Karnataka. 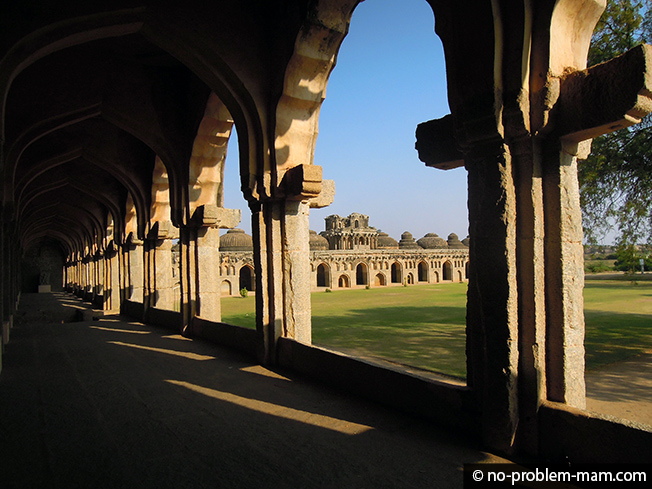 The Nayak dynasties ruled from the 16th century to the 18th in Tamil Nadu. The Nayaks of Madurai and of Tanjavur made major contributions to South Indian architecture. The main characteristics of this style are its temples with thousands of pillars and tall gopurams (towers) decorated with colourful stucco statues. The best examples of this style are the Meenakshi temple in Madurai and the Rameshwaram and Srirangam temples. 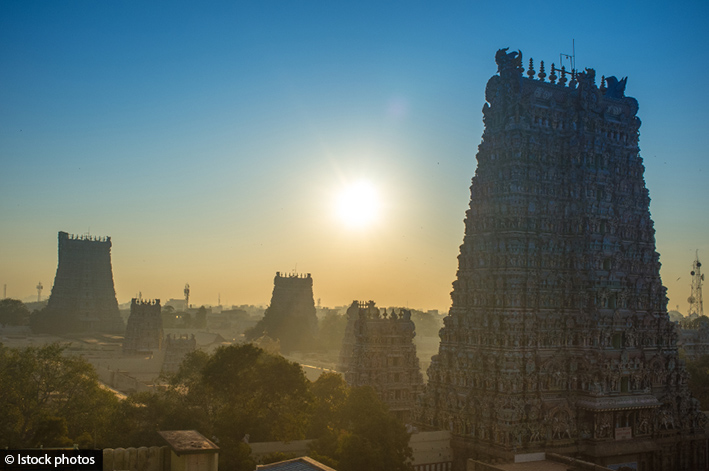 The kingdoms of the North seem to have been less prolific during this period. One reason is the Muslim invasions that began in the 11th century. However, several dynasties continued to build magnificent structures.

The Solanki clan ruled Gujarat from 960 to 1243. Patan, their capital, was one of India’s largest cities at the time. The Solankis built the famous Somnath temple in Gujarat in 1026. Patan’s stepwell, the famous sun temple in Modhera and the Dilwara Jain temples near Mount Abu (1031) were also built under their rule. 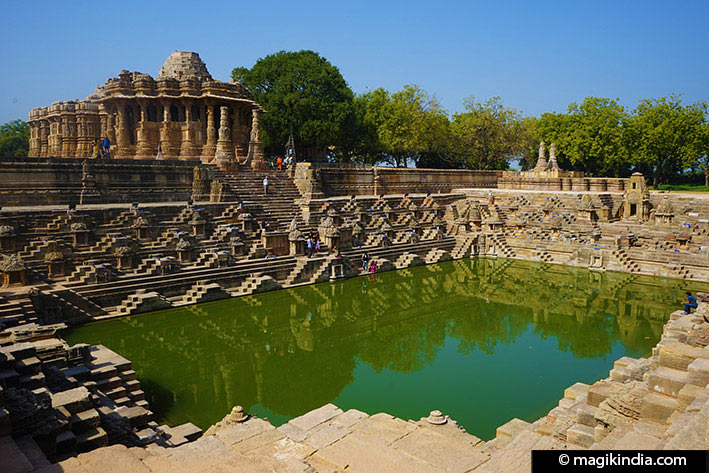 This dynasty ruled over Kalinga (Odisha) from 1028 to 1434. These kings were the descendants of the Western Gangas of Karnataka and were related to the Cholas. They built the incredible sun temple at Konark and the Jagannath temple in Puri. 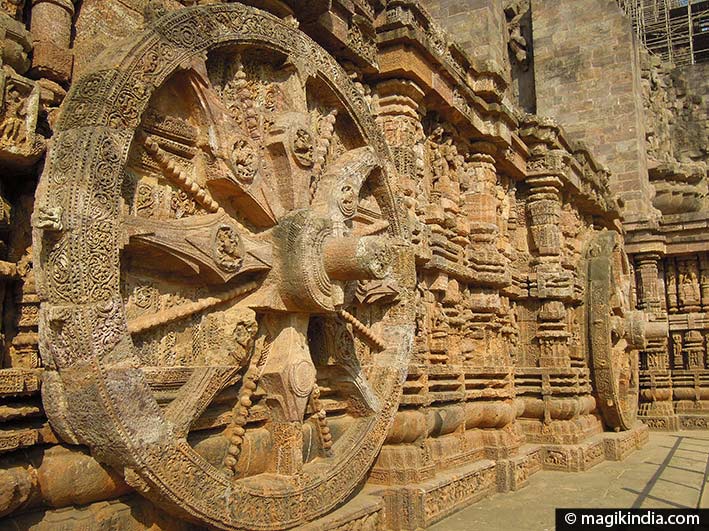 The Chandelas ruled central India from the 9th century to the 13th. The famous Khajuraho temples, built during the 10th and 11th centuries, are their greatest contribution to Indian art. 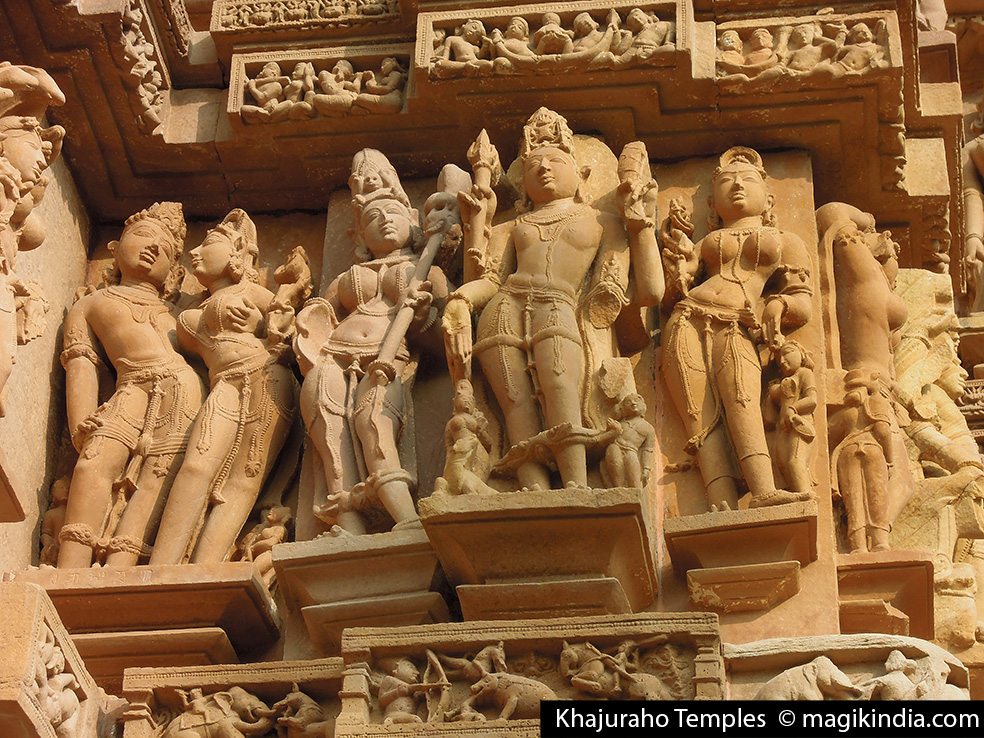 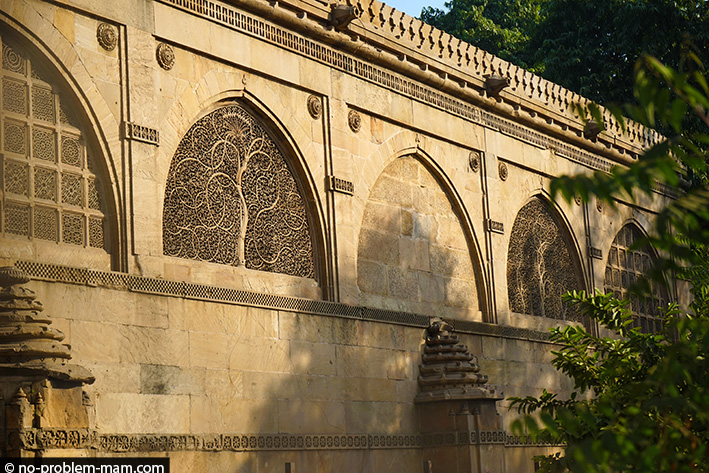 India became a target for the Muslim powers around the 10th and 11th centuries.

Muslim rulers in India were great builders, but until the 16th century they restricted themselves to transforming Hindu and Jain temples into mosques. As a result, Indo-Islamic architectural idioms emerged, particularly in the regions of Sindh and Gujarat (e.g. Sidi Sayid mosque in Ahmedabad). An official style emerged, exemplified in the famous Qutb-minar in Delhi (1226.)

The Mughal style in India is a blend of Islamic, Persian and Indian idioms that took shape during the 16th, 17th and 18th centuries.

The Mughals established their rule in India after Babur’s victory in 1526. Babur built quite a few monuments during his five-year reign but few of them have survived. His grandson Akbar very actively developed the Mughal style. Among his most famous buildings are the Hamayun mausoleum in Delhi, Agra Fort and the Fatehpur Sikri complex. Akbar’s son Jahangir had the Shalimar garden in Kashmir built. 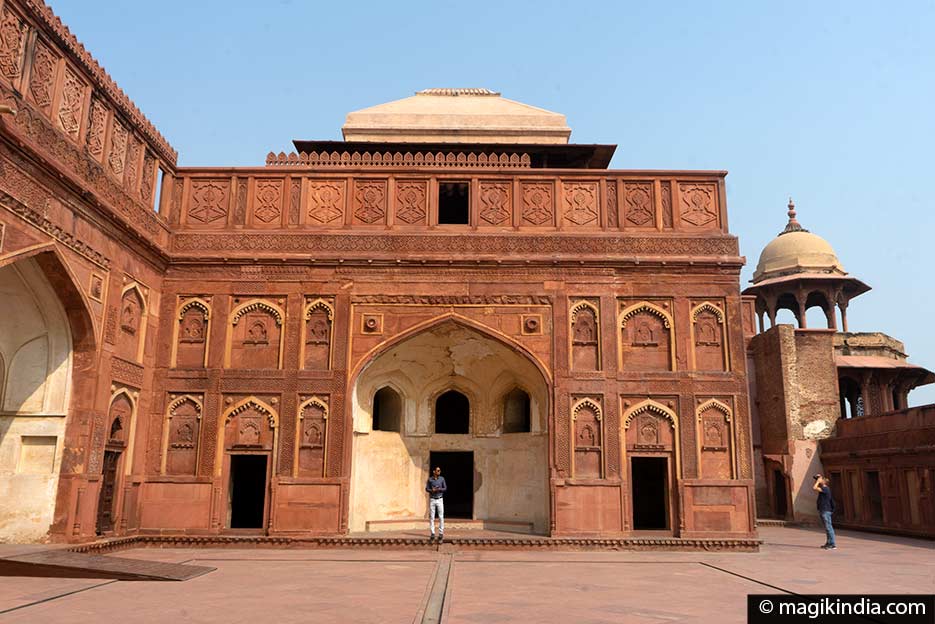 Mughal architecture reached its peak during the reign of Shah Jahan, whose most important legacies are the Jama Masjid mosque and Red Fort in Delhi, the Shalimar garden in Lahore, and India’s most famous monument, the Taj Mahal.

During the Mughal period, many Rajput princes (rulers of the warrior clans of Rajasthan and Madhya Pradesh) formed close relations with the Mughal emperors and served them in various capacities. By the late 16th century they were adopting the Mughals’ decorative style. Most Rajput palaces were built on hilltops or cliff tops, surrounded by fortified walls like austere citadels but with interiors of unequalled refinement.The oldest such palaces that have come down to us date from the mid-15th century: they are in Chittorgarh Fort and in Gwalior Fort. The palaces of Jaisalmer, Bikaner, Jodhpur, Udaipur and Kota exemplify the mature Rajput style; all were built mainly in the 17th and early 18th centuries. 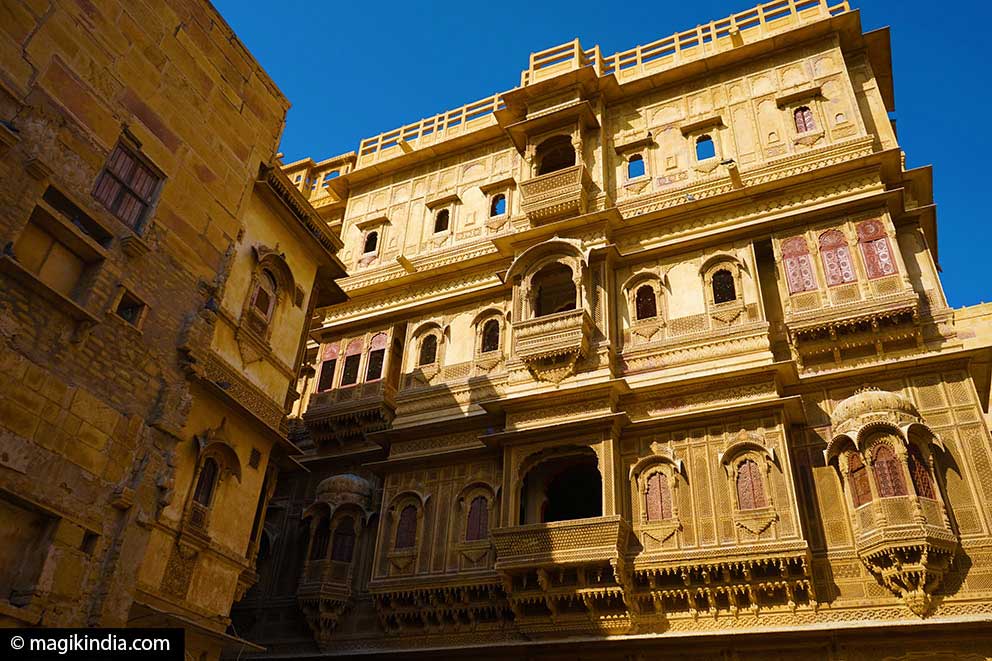 The arrival of the European powers started a new chapter in Indian architecture. The Portuguese, French, Dutch and English all introduced the building styles that were in vogue in their own countries at the time.

The British imported Victorian and Neo-Gothic styles from home but incorporated Mughal and Rajput elements as well. The resulting Indo-Sarecenic idiom unflinchingly combines Mughal domes with Gothic arches and very British clock towers. The most famous promoter of this hybrid style was the architect Sir Samuel Swinton Jacob (1841-1917). His signature can be found on the plans of many buildings including the Rambagh Palace and the Albert Hall in Jaipur, the Lalgarh Palace in Bikaner and Mayo College in Ajmer. 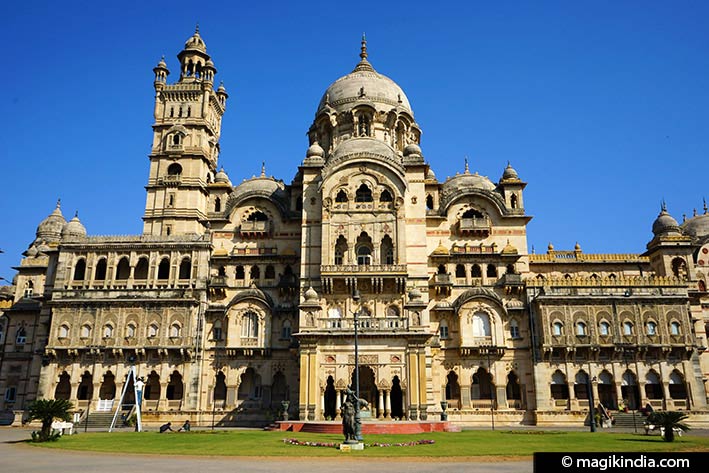 When Sir Edward Lutyens designed the monuments for the new capital, New Delhi, in the late 1920s, he took inspiration from Swinton Jacob’s legacy but with more of an English Classical bent. Art Deco was in vogue in Europe. This style proved very popular with the Maharajas of Rajasthan, many of whom had their palaces built, renovated or redecorated in this spirit, bringing in the best European designers to do the work. The most astonishing example is the gigantic Umaid Bhawan Palace designed by H.V. Lanchester, home of the Jodhpur Maharajas. It is one of the world’s largest private residences. 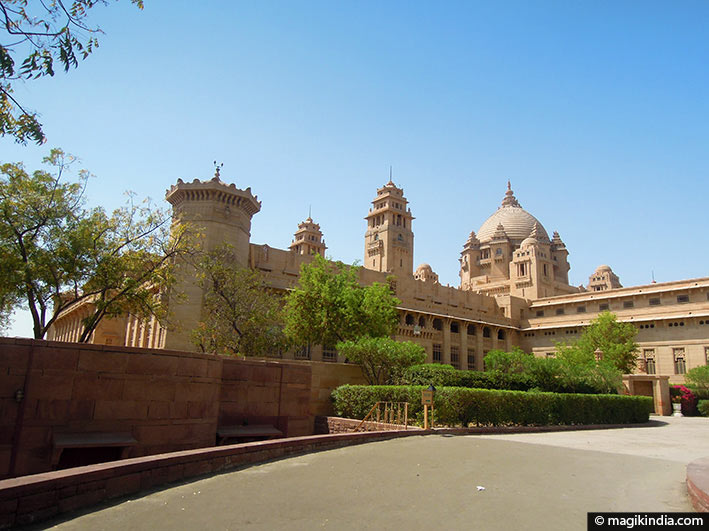 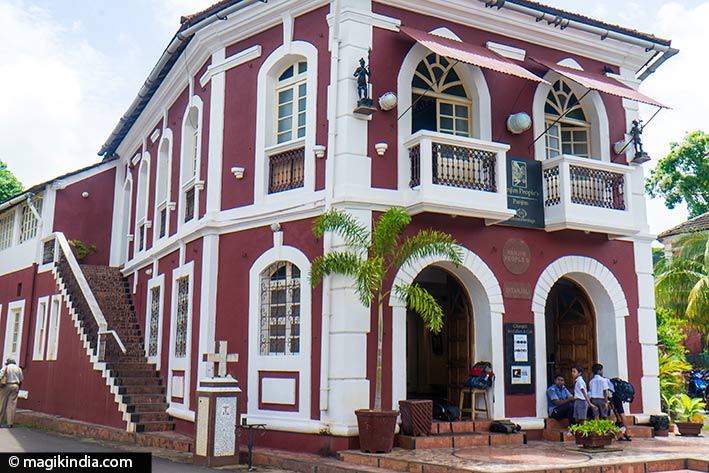 The Portuguese first came to India in 1498 when Vasco de Gama landed at “Calicut”, modern-day Kozhikode in Kerala. The Portuguese set up a trading post in Goa and governed that state for 400 years. The Portuguese legacy in Goa is still much in evidence today. They left a number of cathedrals, churches, basilicas and seminaries. The Bom Jesus Basilica in Old Goa (“bom” means “good”) is one famous example of Portuguese colonial architecture. The Portuguese also acquired the territories of Daman, Salsette, Bombai, Baçaim and Diu from the Sultans of Gujarat. 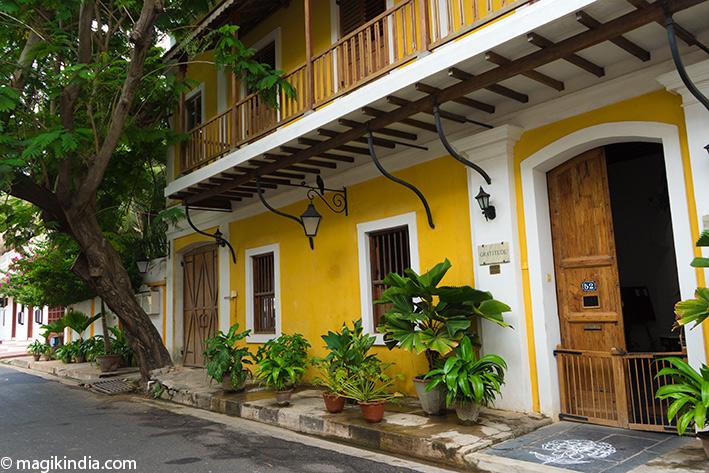 The French had several colonial possessions in India between 1668 and 1954: Pondicherry, Karikal and Yanaon on the Coromandel coast, Mahé on the Malabar coast and Chandernagor in Bengal. From 1816 these were termed “French establishments in India”. The town of Pondicherry was built on a grid pattern following the French model and divided into two, with a French quarter and an Indian quarter.

The Dutch arrived in India in the early 17th century, purely for the purposes of trade. During their 200 years in India the colonised Surat, Bharuch, Venrula, Ahmedabad, Kerala and Sadras.

15 Comments on “Architecture of India”